American Ultra is a rather ambitious cross-breeding between subgenres of film that really have no business going together on paper. As a fusion of fast-paced spy thrillers, ridiculous action extravaganzas and stoner comedies, American Ultra is a rather original beast, if nothing else. It’s also at least headlined by some considerable talent, with Jesse Eisenberg and Kristen Stewart occupying the lead roles, reuniting as an on-screen couple after 2009’s pleasant period dramedy, Adventureland.

For all of its promised insanity however, American Ultra never truly feels like it gets off the ground. The movie has a habit of getting distracted on unimportant details, and this leads to a movie with sporadic bits of creativity and fun, but one that largely fails to leave an impression. Matters aren’t helped by American Ultra playing everything with an odd case of self-seriousness, as if it’s afraid to truly run with its premise, past the first couple of scenes after the inciding incident.

What’s left is an experience that’s firmly out of gas by the time it reaches its somewhat clumsy conclusion, only held together by some of the inspired craziness that came before, even if the promise of more of this brand of fun is one left broken. It’s a shame, and with a concept as imaginative as this, the movie really feels like it doesn’t live up to its potential.

Headlining American Ultra is Jesse Eisenberg’s Mike Howell, a stoned-out convenience store clerk who has a problem with panic attacks, and struggles with the idea of dragging down his girlfriend, Phoebe Larson, played by Kristen Stewart. Mike wants to propose to Phoebe, but his daily shortcomings make this a trying task, despite Phoebe admiring Mike very much, and encouraging him to pursue his life passions, which mainly come in the form of a self-made comic book series called, “Apollo Ape.”

Unbeknownst to Mike however, he’s actually the product of a top secret government program called the Ultra Program, where young delinquents are trained as expert killers to be manipulated as weapons by CIA activation. After Mike is activated, against the wishes of a CIA dick that wants him dead, since he was the aborted program’s only success, he must fight for his life as a series of deranged assassins begin to target him, and those around him. 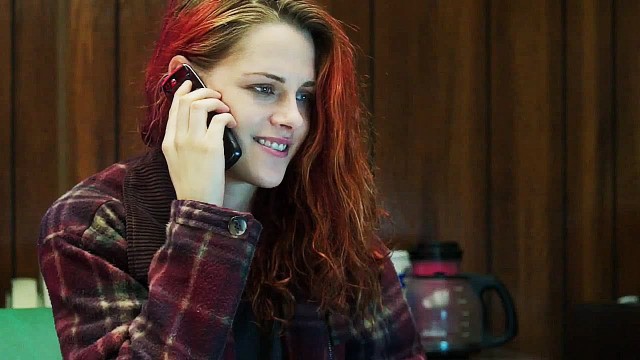 It’s when Mike is initially activated that American Ultra is at its most fun and enjoyable. Eisenberg brings an earnest charm to a slow-thinking underdog stoner protagonist, even if his being overwhelmed and anxious at his situation eventually gets old. Stewart actually feels like the movie’s most enjoyable presence, providing a great support outlet for Eisenberg’s character, and sporting a plot turn about midway through the movie that gives her her own share of great moments to follow.

Many of these moments come from reactions and improvisations to the killers that pursue Mike, the most recurring of which is an unhinged, cackling psychopath called Laugher, played by Walton Goggins. The movie brings up an eyebrow-raising development with how the CIA supplies itself with this many crazy assassins, and to the movie’s credit, its resolution with the assassin arc, and how it plays into the true foundation of the story, is not what you would expect. It does feel a little half-hearted though, perhaps swept a little too cleanly under the rug after the obligatory final shootout.

On the CIA end, we have Connie Britton as kindly agent, Victoria Lasseter, who is the one that activates Mike with a code phrase in his convenience store, and Topher Grace, portraying our villain, Adrian Yates, who has suddenly decided that the one Ultra Program success needs to be killed for… Reasons. Britton is alright, but Grace feels a bit poorly matched with his role. He’s played both slimy opportunists and untrustworthy company men before, but in execution, Grace is just too obvious of a coward and an asshole. There’s no way that anyone at the CIA would take this jackass seriously, let alone give him a position of authority, and casually allow him to kill innocent people. Had American Ultra fully committed to being a raucous, tongue-in-cheek action fest, Grace’s performance might have fit, but when the movie tries to ground itself more than it should, Grace’s character just feels like he’s too obviously evil for the sake of being evil, especially for an organization that so blatantly has to deal in shades of grey.

There’s a few other names in the supporting cast as well, but the movie barely makes use of them. John Leguizamo shows up as Mike’s fast-talking drug dealer, but he merely serves as a forgettable plot device with less than ten minutes of screen time. The same is true of Lasseter’s and Yates’ CIA superior, Krueger, played by Bill Pullman, who barely has three minutes of total screen time, and basically feels like a mere spectator that’s simply tossed in for some last-minute oversight, to avoid American Ultra painting the CIA to look like a bunch of careless, trigger-happy morons. 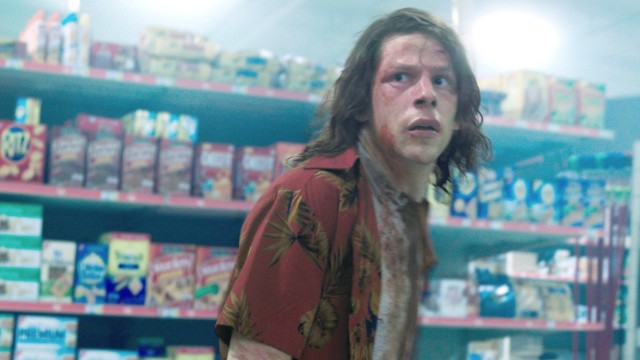 The cast of American Ultra isn’t really an issue, but they’re sadly hamstrung by a script that’s afraid to fully commit to its own premise, feeling like it wastes its best ideas and character turns around the halfway mark, and never really rebounds from that.

American Ultra feels like one of those movies that set sail with a leaking hull. Its story starts out with a sense of fun and promise, but over time, it gradually loses more and more appeal, until it sputters at the third act, and crashes on the rocks.

This is frustrating, because there have been movies like 2008’s Pineapple Express that provide excellent examples of how to do a stoner action-comedy really well. American Ultra’s story premise is also a very solid one, and sounds like something that would be great if it really went for broke, and wasn’t afraid to go truly off-the-rails. To be fair, American Ultra at least has a handful of fun action scenes, even after the story starts falling apart towards the end, but that’s not enough to buoy a script that feels a bit unfocused, and bogged down in trying to ground characters that have absolutely no business being grounded. 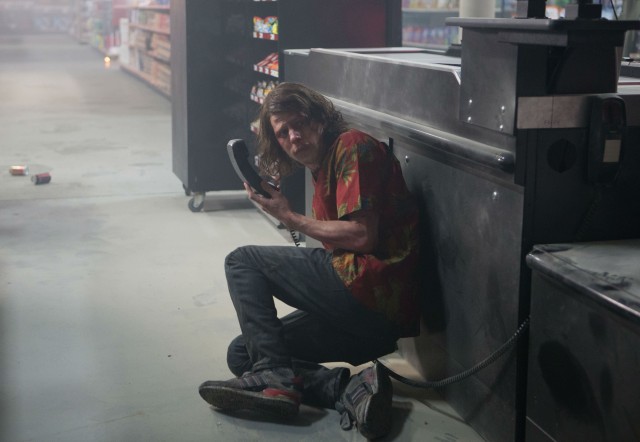 When it does embrace a sense of ridiculous chaos, American Ultra manages to tell an entertaining and original story, but that just happens so rarely. The concept is definitely better than the execution here, with American Ultra sadly being a prime example of a movie proceeding with diminishing returns as each minute passes in its rather snappy 96-minute runtime.

American Ultra is directed by Nima Nourizadeh, who only has one other feature film credit to his name, that being 2012’s found footage house party comedy, Project X. On the one hand, Nourizadeh creates an effectively disorienting, overbearing presentation in American Ultra, something he also did very well in Project X, which nicely emulates Mike constantly feeling like he’s in over his head, and overwhelmed with a sudden rush of genius intellect and killer instinct. On the other though, Nourizadeh’s inexperience as a feature film director can be a detriment, since he doesn’t seem to be able to tweak performances to fit a consistent vision, leading to actors that are all over the map in terms of how the movie’s characters think and act.

Nourizadeh at least knows his way around an in-your-face attitude and plenty of destructive pandemonium, but that will merely make you wish that he was given a script that didn’t feel so hamstrung by its own material. Nourizadeh inevitably can’t elevate the writing, and his need to create a bunch of time skips and rewinds and flashbacks where they don’t make sense, make American Ultra sometimes feel needlessly confusing, and like it’s over-explaining details that aren’t important. The worst instance of this actually comes right at the beginning of the movie, with everything being a frame device after a bruised and battered Mike is taken into CIA custody and recounts his experience, which criminally gives away many of the movie’s money shots right from the get-go, pulling the rug out from underneath the movie in terms of suspense.

The result has American Ultra feeling like a half-baked head trip that will leave you feeling like you just smoked a bad hit of weed. Maybe that’s the idea, but if all the movie is going to emulate for the audience is a confused headache, then it’s probably worth adding a bit more quality ingredients to the concoction.

American Ultra is a considerable disappointment, and ultimately feels like a failed experiment. Some of the disorienting chaos and surprisingly brutal violence can create a satisfactory sense of excitement during the action scenes, but this doesn’t happen often enough to make the movie truly feel like it’s consistently fun. The experience is very distracted and inconsistent, and will likely underwhelm viewers, even if you are trying to watch it while high.

There are bits and pieces of a good time here, since the cast is solid, and the presentation has moments of silly, chaotic charm. American Ultra just can’t bring its working parts into a cohesive whole though, perhaps being an overly ambitious genre blend that just doesn’t feel like it goes together. Again, it’s not impossible to do a stoner action-comedy, with Pineapple Express being one of the best recent examples of a great one, but American Ultra just doesn’t pull it off.

This is why the rather low box office numbers for American Ultra aren’t really a surprise, especially with this August’s box office being more cooled down than most years, beyond the runaway success of Straight Outta Compton anyway. Thus, the movie is difficult to recommend as a theatrical viewing, though enthusiasts of stoner movies may find it to be an acceptable home viewing rental, if they come into it with lowered expectations.

The bottom line is, if you’ll excuse the pun, that if there’s one feeling you want to avoid from a stoner movie, it’s the feeling of being half-baked.