Next year will mark the tenth anniversary of Sega’s highly successful open-world brawler series, Yakuza, known as Ryu Ga Gotoku in its native Japan, roughly translating to ‘Fist of the Dragon’. Sega’s got some big plans to celebrate the occasion, starting with two all-new games that were revealed during Sony’s Tokyo Game Show press briefing this year.

The first game, appropriately, will be a full remake of the original Yakuza, which was announced for PlayStation 4 and PlayStation 3. The remake, called Yakuza: Kiwami, will include not only updated visuals, but also some improvements to accessibility and the interface, as well as some all-new story content. Its Japanese release date was revealed for January 21st, 2016, and hopefully, the game doesn’t take too much longer to reach North America, who is a bit behind on the Yakuza games, but has nonetheless seen almost all of the mainline entries up to this point, save for the most recent Yakuza 0, which is currently without release plans in North America, and the series’ latest canonical point, Yakuza 5, which will release digitally on PlayStation 3 for North America before the end of this year, despite launching in Japan all the way back in 2012.

This is not the first time that Sega has attempted to re-launch the original Yakuza game, which came to PlayStation 2 mere months before the PlayStation 3 launched worldwide. In Japan, HD remasters of the first two Yakuza games that debuted on PlayStation 2 were released for PlayStation 3 and Wii U, with the Wii U port of this bundle marking the only time that this series has ventured outside of PlayStation platforms, though they were rather large commercial failures, leading to a denial of localization for the bundle outside of Japan. Unlike those remasters however, Yakuza: Kiwami will be a full remake of Yakuza, rebuilt from the ground up, and not just a simple HD update. 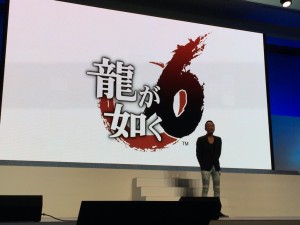 Better still is that 2016 will also see the release of Yakuza 6 in Japan, which was newly announced by Sega during Sony’s TGS keynote. Yakuza 6 is coming exclusively to PlayStation 4, and purchasers of the PlayStation 4 version of Yakuza: Kiwami can enjoy an exclusive demo for Yakuza 6, though this incentive is obviously not being offered in the remake’s PlayStation 3 version. Sega didn’t have any solid details on Yakuza 6 at this point, let alone any idea of when it will release outside of Japan (we’d be lucky to receive the game in 2017 at this rate), but more details will come later.

Yakuza is a series with a small, but devoted cult following in Western territories, though in Japan, the series is a far bigger franchise, where it virtually stands as Japan’s equivalent of Grand Theft Auto. Similar to Grand Theft Auto, players undertake missions and engage opponents in an open-world sandbox environment, all while working in service to a clan within the Japanese organized crime ring, the Yakuza.

Keep organizing Eggplante for all news and updates on Yakuza.