Given that Q4 is upon us in a couple of weeks, and no concrete release information is nailed down, it likely won’t surprise you that Atlus began its much-touted ‘Persona 5 Event’ at this year’s Tokyo Game Show by confirming a delay. Despite Atlus bullishly claiming that Persona 5 would release this year as recently as E3, a new trailer confirms that we won’t see the highly anticipated Japanese RPG/social sim hybrid this year. 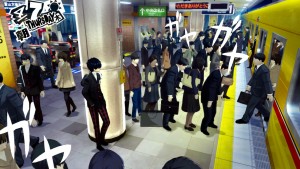 Persona 5 has now been set for release in Summer 2016, marking a pretty significant bump. Fortunately, Atlus doesn’t seem to be changing the worldwide release plan that they announced beforehand for now, where Persona 5 will release in all territories around the same time, not arriving almost a year early in Japan, as with the series’ previous titles. North America and PAL regions may have to wait slightly longer than the Summer window in the end, but the Japanese at least have the game set for later next Summer now.

To compensate for the delay announcement, Atlus showed off a new trailer for the game, and also released lots of new information about the plot and gameplay. Apparently, the main character and his allies don masks that allow them to summon their Personas, and the main character has a mysterious alter-ego that comes forth when his own mask is put on. The game also appears to increase the scale of the series by taking place in capital Japanese city, Tokyo, where the main character and his allies, a young man, a talkative girl and a shapeshifting cat, perform heists, with the main character leading the pack as a spiritual thief called ‘The Phantom’. The game’s navigation in dungeons also seems to incorporate some sort of stealth element, though Atlus didn’t reveal too much about that.

The game will maintain the Persona series hallmarks, including a blend of real-world Japanese culture and worldwide mythological/urban legend elements, social links that allow players to develop relationships both platonic and romantic with their peers, and the chance to develop and customize their protagonist’s arsenal of multiple Personas to summon in battle. The turn-based battle system from previous Persona games is also being maintained in Persona 5, along with a stylized interface that definitely makes the game appear to be the most polished and ambitious Persona game yet!

Keep summoning Eggplante for all news and updates on Persona.