Marvel’s Netflix Original Series, Luke Cage is now going full steam ahead on production, before it premieres exclusively on the Netflix streaming service next year, and with that being the case, Marvel Television has now officially confirmed which lead actors and characters will be populating the series, aside from previously confirmed star, Mike Colter, who will portray the title character, after debuting him in this year’s Netflix series, Jessica Jones.

Working alongside Colter, are the following actors and characters, and this is now set in stone, even after several of these personalities and names floated around as rumours a few weeks back:

To start, if you’re unfamiliar with the character of Luke Cage himself, he’s one of the pioneering African-American superheroes of Marvel lore, alongside characters like Falcon and Black Panther, and made his debut in Luke Cage: Hero for Hire #1 back in 1972. After a botched prison experiment grants Cage superhuman strength and unbreakable skin, he starts up a business called Heroes for Hire, where his services can be bought by those who need his help. Cage has frequently hosted this business with fellow Marvel hero, Iron Fist who is often Cage’s best friend, along with Cage’s future wife, Jessica Jones, star of her own Netflix series this November. Iron Fist will also receive his own Netflix series, likely in 2017, though an actor has still not been cast to portray him, nor has a showrunner been decided for that series. 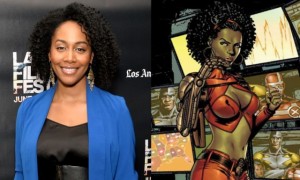 Next, Simone Missick will officially portray Misty Knight, a Harlem police officer who is determined to find out the truth about Luke Cage. In Marvel lore, Misty loses her arm in a bombing accident, though is then given a specialized bionic arm by Iron Man. Misty has also worked with Cage in the Heroes for Hire business before, and has served as a frequent love interest of Iron Fist, potentially paving the way for Missick to appear in the Iron Fist series later, or possibly even crossover Netflix miniseries, The Defenders. Given that Marvel emphasized that Misty hails from Harlem, it’s also possible that she may be partially motivated by the events of 2008 movie, The Incredible Hulk, which saw much of Harlem destroyed by the climactic battle between Hulk and villain, Abomination. This implication was also teased during the first season of sibling Netflix series, Daredevil, where reporter, Ben Urich has framed a clipping of his report on the Hulk/Abomination battle, which was clearly a well-known and devastating incident for New York in the Marvel Cinematic Universe.

Alongside Misty Knight will be Rafael “Rafe” Scarfe, portrayed by Frank Whaley, as rumoured. A hard-nosed NYPD detective, Scarfe partners with Misty Knight on the Luke Cage investigation. In Marvel lore, Scarfe was yet another valuable ally to the Heroes for Hire as well.

Also working with the good guys is Rosario Dawson as Claire Temple, a character that first appeared during the debut season of Daredevil. A stand-in for Marvel hero caretaker, Night Nurse, whom Rachel McAdams is rumoured to be properly portraying in next year’s Doctor Strange movie (hence why Night Nurse being in the Netflix shows was vetoed at the last second by Marvel), Claire will once again find herself having run-ins with the darkest and most violent street-level heroes in the MCU within Luke Cage. Claire is also set to appear in next year’s second season of Daredevil, and will appear again in Jessica Jones later this year as well, essentially making her the Agent Coulson equivalent of Marvel Television’s Netflix shows, it seems, being the connective character that bridges them more directly, beyond them all inhabiting the MCU.

On the bad guys’ end, we first have Mahershala Ali as principal villain, Cottonmouth, an early foe of Luke Cage from Marvel Comics lore, not to be confused with another Cottonmouth that serves as a member of Captain America villains, the Serpent Society. The MCU version of Cottonmouth is a Harlem nightclub owner who is now named Cornell Stokes for the MCU, not Cornell Cottonmouth as he is in Marvel Comics, and his criminal activity begins to interfere with the life of Luke Cage in unexpected ways. In Marvel Comics, Cottonmouth originally tried to hire Luke Cage to do his evil dirty work, but when Cage refused to assist a bad guy, Cottonmouth became one of his first major antagonists. In the comics, Cottonmouth has enhanced strength and sharp teeth, though it’s likely that his MCU incarnation will just be a regular human crime lord, at least to start.

The next major villain in Luke Cage is Shades, who, as rumoured, will be portrayed by Theo Rossi. Shades is actually the very first villain that Luke Cage encountered back in 1972, being an escaped felon that found a visor that allowed him to shoot optic blasts, similar to X-Men mutant, Cyclops’ inborn mutant power. There aren’t as many details surrounding the MCU version of Shades yet, but it’s likely that, as with the comics, he’ll be among the first foes that Luke Cage squares off against, before properly starting his Heroes for Hire business. 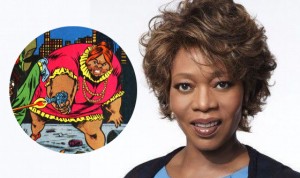 Finally, Alfre Woodward will be portraying who appears to be the show’s biggest antagonist of the lot, Mariah Dillard, a politician and cousin to Cottonmouth, who aims to bring new order to the rough streets that she grew up on. While ‘Mariah Dillard’ is not a name from Marvel Comics, it’s likely that the character is meant to be the MCU’s version of crime lord, Black Mariah, a major early foe of Luke Cage and the Heroes for Hire from Marvel Comics. Black Mariah led a gang called the Rat Pack in Marvel Comics, who drove an ambulance that grabbed dead bodies and stole their valuables. Naturally, this won’t be the M.O. of the character’s MCU incarnation, who will also be re-imagined as a more grounded, average-build woman. In Marvel Comics, Black Mariah is an enormous 400-pound bruiser, which allowed her to more directly engage Luke Cage in combat. She also had no relation to Cottonmouth in Marvel Comics lore, with that character angle being made up for the Netflix series.

As with Daredevil, Marvel fans will no doubt notice that several major foes of Luke Cage from Marvel Comics are nowhere to be seen for the show’s debut season by the look of it, most notably Diamondback, a knife expert that formerly served as Luke Cage’s cellmate and early arch-nemesis, who was later killed off and soft-rebooted as an entirely separate Caucasian female character. The original male version of Diamondback was set to be the villain in the aborted Luke Cage movie that was formerly in development at Sony Pictures, though after Sony failed to start production on the movie in the alotted time, the rights expired, and automatically returned to Marvel in 2013.

What do you think of the finalized lead cast for the Luke Cage Netflix series? Are you satisfied with the characters and actors? Do you wish that characters like Diamondback and other major villains of Luke Cage had made appearances? Are you excited for the series, or apathetic? As usual, your comments are welcome below.

Keep hiring Eggplante for all news and updates on Luke Cage, and other developments in the Marvel Cinematic Universe.