The Big Bang Theory ended its eighth season on a surprisingly depressing note, with Leonard’s earth-shattering revelation of unfaithfulness to Penny as they make their way to a hasty, ill-planned Vegas wedding, and Amy announcing that she wishes to suspend her romantic relationship with Sheldon, not knowing that Sheldon was soon planning to propose to her. For a happy-go-lucky sitcom like The Big Bang Theory, this was a pretty heavy thing to kick off the lengthy Summer break with.

The show doesn’t change this direction with the Season Nine premiere, “The Matrimonial Momentum” either. Nothing has changed for the gang. Sheldon predictably comes apart and fails to grasp the meaning of Amy breaking up with him. Likewise, Penny is blatantly unhappy about Leonard being the one to stray, and that, combined with the predictable tackiness of a cheap, quick Vegas wedding, hung heavy in the air. It’s not that this episode was devoid of laughs, but they were certainly pretty dark laughs, on top of being more rare than the show is used to. 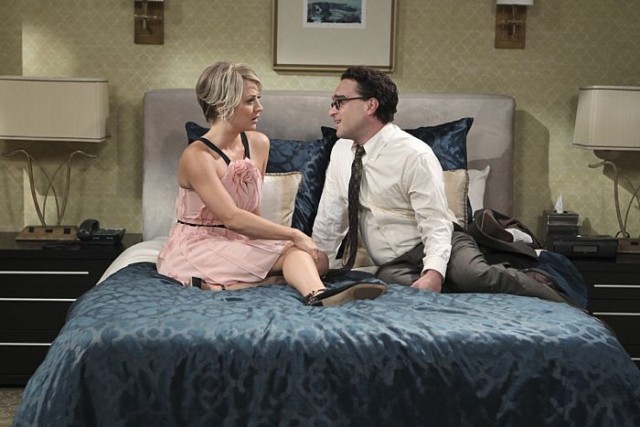 Regardless, as Leonard and Penny bicker over Leonard’s brief straying, while they wait to be up in a queue of people hastily getting married, Sheldon calls Leonard to tell him that Amy terminated their relationship. Leonard is sympathetic, and seeing Penny call Amy at the same time as Leonard was on the phone with Sheldon was actually a funny scene, and probably the cutest scene of this entire otherwise bleak premiere. Sheldon’s predictably immature reactions also often served as this episode’s highlight jokes, with Sheldon sounding like a spurned school boy, with very funny results that helped to prevent this episode from becoming too sad, even as Sheldon faced a big crisis.

Meanwhile, Leonard and Penny pay for an internet option that allows the gang to watch their wedding via an internet broadcast at the Wolowitz house. Sheldon is the only one not invited, due to Bernadette inviting Amy, and worrying that having Sheldon and Amy in the same room so soon after Amy wanting space would lead to a lot of awkwardness, even if that is, as Sheldon rightfully declares, their ‘thing’ as a couple in the group.

This leads into another of the episode’s more amusing sections (thank God for Sheldon this week!), where Sheldon instead shows up outside, talking from the outside window, but assures that he doesn’t want to come in, to avoid awkwardness. It’s a perfectly executed Sheldonism that fits the situation, and was as funny as it was pathetic. 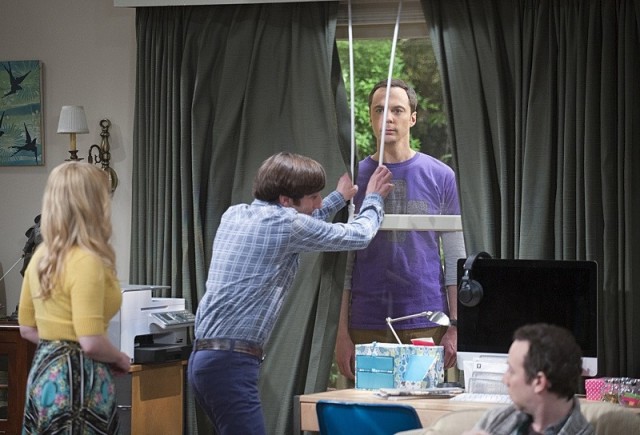 Sheldon makes things worse however when his pushiness motivates Amy to terminate their relationship fully and for good, prompting Sheldon to immediately ask for a ride home. As Amy is brought into the kitchen by Bernadette and Stuart, Raj agrees to take Sheldon home, with Leonard and Penny exclaiming to the camera that they’re so happy everyone could watch their big day. Again, it was pretty dark humour, and it really made the show feel vaguely unsettling in its Season Nine premiere, but not necessarily in a bad way. After all, it’s about time that the show really committed to challenging the audience comfort zone, and truly shaking things up!

Naturally, Leonard carrying Penny into their hotel room (which goes about as well as you’d think) leads to Penny revealing that she’s still not alright with Leonard kissing another woman. Leonard also ends up pouring salt in the wound when he inadvertently reveals that the woman is a co-worker of his, and he actually sees her all the time. It puts a damper on the rest of the honeymoon, and the two are left to drive back to Pasadena, starting their quickie marriage off on a pretty sour note.

I must say, it’s very ballsy for The Big Bang Theory to realize the long-awaited Leonard/Penny marriage, probably one of the main anchors driving this sitcom since it started back in 2007, as something that is very much less than perfect. The marriage feels more real when it doesn’t unfold like a fairy tale, with lots of dark secrets and anxiety permeating the entire event, which is also far from how Leonard, Penny and the audience would have anticipated it to unfold. Nothing will match the grandiose expectations that one can have for a wedding to their true love, and The Big Bang Theory made a big gamble by capturing that flawed, imperfect idea of a marriage between two struggling lovers, but one that really worked, and helped the show feel more grounded and generally relatable than it has in a long while. 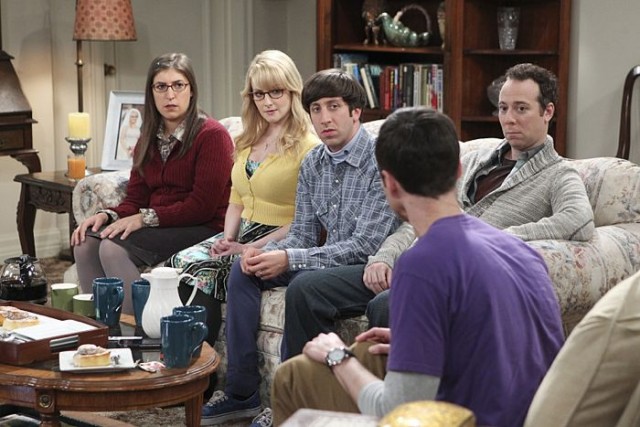 This really hit home when Leonard and Penny angrily separate for their first day of marriage, leading to a rather ineffective pep talk by Sheldon to Leonard, which is full of effectively comic misogyny. Sheldon even surprisingly tries to comfort Penny, even amidst his own romantic turmoil, which humourously results in him making a hot beverage for Penny, then taking the cup and teapot back when he doesn’t get the result he wants. Again, it’s classic Sheldon, and the contrast of Sheldon and Leonard dealing with their respective romantic challenges with an immature and grounded approach, respectively was something that worked well, even as the premiere ended with things being no better, and offering no indication of improvement for anyone in the short term.

Still, this change in dynamic makes The Big Bang Theory feel more bold and impactful than it ever has to date in many respects, and that’s not a bad note to kick Season Nine off on. Yes, many general viewers of the series will probably feel that the show needs to lighten up, and they may have a point, but still, you have to respect the commitment to actually challenging the characters and making them grow, which is overdue for a series that has been airing for almost a decade now. The humour was light, and some of it really didn’t work, namely the creepy scenes of Stuart trying to hit on Amy and Penny when he hears of their romantic plights (yeah, he’s a sad sack, but he’s not supposed to be a sleazeball!), though for the most part, the series feels like it’s growing up more for Season Nine, and finally shedding a lot of the stubborn convention that has sometimes eroded at it like rust in recent years. 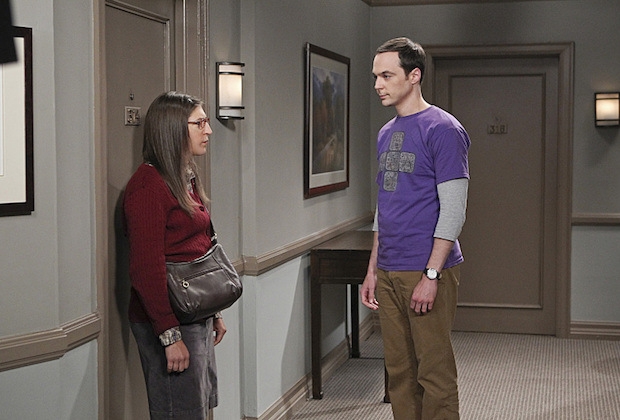 Maybe next week’s episode should indeed brighten things up a bit (just a bit), but The Big Bang Theory still boldly and effectively committed to a daring direction for the start of Season Nine, and one that worked very well for the most part. Sheldon was left to push almost all of the humour, and owned all of the highlight bits, but the fact that things weren’t cleanly resolved from the Season Eight finale is actually a good thing. It means that the characters are coming from a more real place than they ever have before, and that will make any chance at emotional redemption for any of them feel all the more well-earned and rewarding when it does arrive, even if it takes all season to get there.

All in all though, that should make for a strong season that’s worth watching.

The Big Bang Theory 9.1: "The Matrimonial Momentum" Review
The Big Bang Theory returned for Season Nine on a sustained melancholy note from Season Eight's conclusion, with Leonard, Penny, Sheldon and Amy all facing a major emotional crisis, making the series feel darker, but also more mature than it's ever been.
THE GOOD STUFF
THE NOT-SO-GOOD STUFF
2015-09-22
83%Overall Score
Reader Rating: (1 Vote)
83%