Regardless, Season Two kicked off with Phil and his ever-perky wife, Carol Pilbasian heading out of Tucson, after Phil was unceremoniously evicted by the other Phil Miller, There’s the expected montage of the two going to new places, which Carol sketches out in lieu of photographs, and eventually, the two settle in to the White House. This of course comes after the reveal that, in the interim after Season One, Phil and Carol apparently stole a stealth bomber, leaving one to hilariously wonder just what kind of misadventures these two have been up to while we’ve waited for The Last Man on Earth to return to the airwaves. 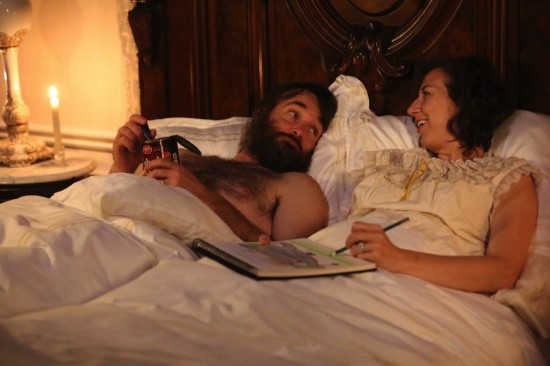 Despite the two traveling cross country in a functional motor home however, Carol remains restless. She just doesn’t feel like anywhere is truly home. This comes to the heavy exasperation of Phil, who is frustrated that even the White House itself isn’t good enough for Carol. Sure, the two manage to have fun, between surfing around the halls, and even forcing busts of former presidents to make out, but it just doesn’t make Carol feel at peace. After all, despite Phil’s bad attitude, Carol had friends, and a healthy community, back in Tucson. With Melissa, Todd and the rest feeling so far gone, it would be natural for her to feel a hole in her life.

Fortunately, Phil does something uncharacteristically sweet, tracking down Carol’s old apartment in Delaware, and driving her all the way to it. Seeing a window into Carol’s pre-Phil life was both amusing and actually kind of sad. It was a great mix of laughs and pathos when we see that Carol’s room is filled with craft tributes to all of the dead people that she lost, and the audience will feel a heavy heart when Carol tells Phil that even Delaware doesn’t feel like a place to settle anymore. Naturally, this frustrates Phil even more, and the two end up hitting the road again.

Meanwhile, in space, we get more insight into Phil’s unnamed brother, played by Jason Sudeikis, and briefly glimpsed in the very final scene of Season One. Phil’s brother is still floating in a space capsule, as the lone man in some unknown mission that involves a worm study, and his own loneliness nicely echoes Phil’s. In fact, if anything, Phil’s brother is even worse off. He’s left to drift in space, all alone, with no one to receive him, and is constantly haunted by the probability that he will contract the virus and die if he returns to Earth. Of course, this is then off-set by Phil’s brother confiding in his worms that he needs to masturbate, and that they should turn around, but hey, it was a great introduction of the character nonetheless!

When Phil and Carol hit a gas station, Carol says she wants to take a nap, right as Phil goes to fill up the motor home. Carol changes her mind however, and decides to visit the gift shop, finding some beads with which she can decorate an Oklahoma tourist shirt. Of course, Phil doesn’t realize that Carol is out of the motor home, and ends up driving off and accidentally abandoning her. The scene where Carol tries to get Phil’s attention by shooting her gun in the air, only to have the shots timed with the song that Phil is blaring in the car, was a pretty hilarious moment, even if it’s no doubt bad news for Carol.

Phil ends up driving long into the night before he realizes that Carol is missing, and tries to drive back looking for her, to no avail. Carol meanwhile has ended up in a completely different place, with Phil eventually deciding to bravely check Tucson. When he arrives however, he finds that his old house has been torched, and his former community is now missing. Yes, we don’t see Melissa, Todd, other Phil, Erica, or Gail at all this episode, with their whereabouts currently unknown. As the community appears decayed and abandoned, the audience will really feel the loneliness of both Phil and Carol, who are now left to separately fend for themselves.

Likewise, Phil’s brother is down to just two worms to confide in, and one of them ends up dying. He releases the worm capsule into space in a sort of funeral, and then appears to resolve to go back to Earth. Still, he’s hesitant, and the episode ends with Phil, Phil’s brother and Carol all sitting alone, thinking about how much they miss everyone. It was a surprisingly bleak moment to end this episode on, but honestly, it really brought The Last Man on Earth back to its high points of Season One.

The Last Man on Earth is a comedy with plenty of humour, and this was true of the Season Two premiere, but the fact that the series doesn’t skimp on tragedy and disappointment is a big part of what makes it work. It’s a dark comedy executed to perfect effect at its best, with the characters facing seemingly hopeless, very difficult situations. The other lead characters were missed, but Season Two still started off right, perfectly balancing the humour and the tragedy. The Season Two premiere is honestly one of the best episodes that the series has delivered yet, because you felt a sense of melancholy, but not at the expense of plenty of clever humour.

Who knows when everyone will reunite, or, most bleakly, if they will reunite, but one thing is for sure. The Last Man on Earth remains one of the most bold and refreshing sitcoms on television right now, and it’s only gotten better with the start of Season Two!

The Last Man on Earth 2.1: "Is There Anybody Out There?" Review
The Last Man on Earth kicked off Season Two with an episode that perfectly balanced comedy and tragedy, as Phil and Carol end up separated, and Phil's brother ponders the uncertain fate of the planet.
THE GOOD STUFF
THE NOT-SO-GOOD STUFF
2015-09-28
90%Overall Score
Reader Rating: (0 Votes)
0%