Brooklyn Nine-Nine’s impressive second season rounded off with a very tantalizing tease, as Captain Holt was banished to the ineffectual PR department by Deputy Commissioner Wuntch (and took Gina with him), and the rest of the precinct stood together as the elevator doors opened to reveal their unseen superior officer. With Season Three now kicking off with the aptly titled, “New Captain”, who was behind the doors?

Apparently, Bill Hader’s hyper-efficient, misanthropic Seth Dozerman, who measures his entire life by time management, and has a heart attack within thirty seconds of entering the precinct. This might have been a very funny joke, had the show committed to the character dying right then and there, but sadly, the Nine-Nine had to suffer from Dozerman for a little while longer. 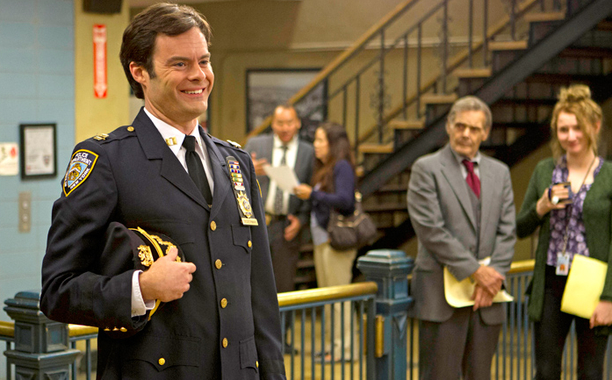 As for the audience, Hader was a neat guest star, though his character was pretty over-the-top. One has to wonder how the precinct signed off on Dozerman giving everyone hyper-capable tablets that had his face on them, and were trained to berate them if fifty-five minutes had passed without a task completed. Oh, and apparently they have Backgammon, because he couldn’t delete it, but nobody is allowed to play it. Fortunately, the weird tablets do provide some of the episode’s better jokes, particularly with Diaz, who naturally begins abusing hers in some rather creative ways, and swears to Jeffords that she is going to play a lot of Backgammon on it!

Also a focal point in this episode is Peralta and Santiago dealing with the fallout of their big kiss from the end of last season. The two do their best to have a casual, unspoken and sex-less dating life, despite the nosy interactions of Boyle (another outlet for this episode’s best jokes), and after getting so nervous on their first date that they quickly get drunk on vodka shots, they end up immediately breaking their rule of not having sex.

Surprisingly, it’s Santiago that runs with this more, despite being the heavily uptight polar opposite of the often carefree Peralta. After Santiago suggests making out at work, the two are discovered by Dozerman, who has another heart attack from the shock, and actually does die this time. He actually has a pretty amusing final line too, telling Peralta to tell his wife that he loves her… Work ethic. Even Diaz follows this up with a great joke, when she realizes that she can now never tell Dozerman how much she hates him to his face, instead feeling that she should tell his wife at the funeral, even though it won’t be the same. Diaz and Boyle also immediately jump at the opportunity to look at the surveillance tapes in the evidence room that Peralta and Santiago forgot about before their bright idea. Boy, thank God for Boyle and Diaz this episode! They kept the laughs coming! 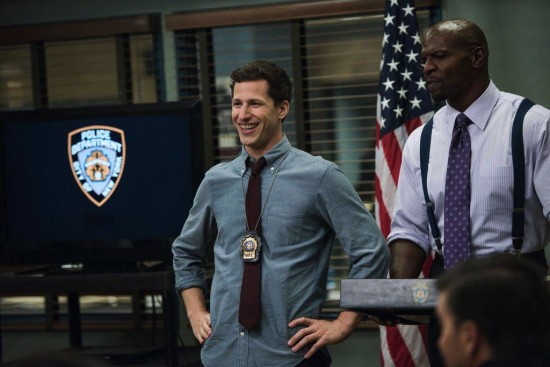 So, the precinct quickly finds out about Peralta and Santiago in a rather uncomfortable way, and Santiago ends up getting freaked out, and terminating her affair with Peralta. This is almost infuriating, and an unwelcome throwback to the tedious Peralta/Santiago drama from last season, but fortunately, Santiago later comes to Peralta’s apartment, and says that she doesn’t care about light and breezy anymore, and just wants to be with Peralta. Again, considering how uptight Santiago is, this is a bold and brave moment for her character that you can’t help but respect. It felt very satisfying to see Santiago being the one taking charge, especially after Peralta was the one chasing her last season. Boyle did naturally ruin the moment a bit, to funny effect, as Santiago wasn’t aware that Boyle was at Peralta’s place when she came by, but it was satisfying nonetheless.

Oh, but don’t think that the season premiere forgot about Holt and Gina. The two quickly struggle with the PR department taking weeks to name a new pigeon mascot, which almost has the feud between Holt and Wuntch reaching a boiling point, before Holt resigns himself to his new position, and feels that he has failed, and must leave the NYPD altogether, particularly after Wuntch makes him dress up in the mascot outfit for a police presentation to grade-schoolers. Gina gives him a pep talk however, and Holt decides to work his way back up, re-committing to his plan to improve the PR department. Fortunately, Gina also proved to be a great source of humour in this premiere, with one of this episode’s biggest laughs coming when she introduces herself as the human personification of the ‘100’ emoticon. Oh, Gina. Never change!

That said, as much as Season Three of Brooklyn Nine-Nine seems to be going to some really bold, interesting new places, this premiere didn’t really hit the ground running as much as Season Two’s premiere did, or even the pilot. The show is going through some growing pains with its new dynamics, and some of them feel a bit awkward for now. Some of this is probably intentional, namely the Peralta/Santiago romance, but the show clearly needs a bit of time to re-adjust to the new character roles, and really hit its A-game again. Scully and Hitchcock didn’t even really appear at all (though Scully was mentioned briefly by Dozerman after he was revealed to be in the bathroom for a while), and it so far feels like the Holt/Gina setting is playing second fiddle to the reliable antics of the Nine-Nine precinct itself. 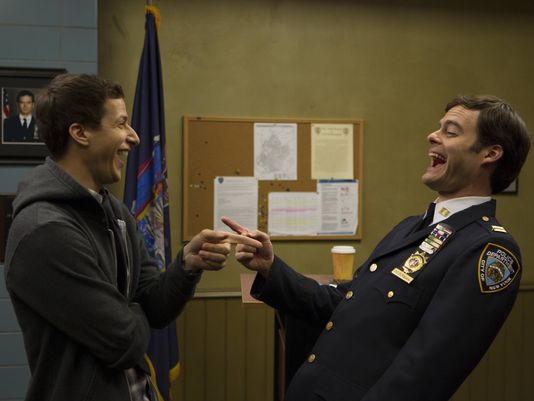 Still, the premiere did end on a pretty hilarious and shocking note, as The Vulture himself, Detective Pembrooke, ends up taking the place of the late Dozerman as the Nine-Nine’s new captain. Naturally, he quickly promises to make the office miserable, and that’s where the episode ends. I have to admit, that was a very unexpected twist, and one that the show nicely delivered as a great, grim surprise!

“New Captain” has some early kinks, but despite some rough, awkward elements in the new character writing, this season premiere still had plenty of effective jokes, and set up for a lot of interesting new story directions. Some of those stories are more intriguing than others for now, but it’s nonetheless great to have the Nine-Nine back in action, and still feeling like they haven’t lost their touch with all of these upheavals!

Brooklyn Nine-Nine 3.1: "New Captain" Review
Brooklyn Nine-Nine is dealing with some growing pains in its drastic shifts with the character dynamic for Season Three, but it nonetheless delivers a solid third season premiere with some good laughs, and some well-executed surprises.
THE GOOD STUFF
THE NOT-SO-GOOD STUFF
2015-09-28
80%Overall Score
Reader Rating: (0 Votes)
0%