Microsoft has been enjoying the increased sales of a leaner, cheaper Xbox One for a while now, but at long last, Sony is also going to get competitive with a price reduction. The PlayStation maker has confirmed today that their ultra-popular PlayStation 4 game console will be getting a price cut of in North America, and that includes our native Canada! 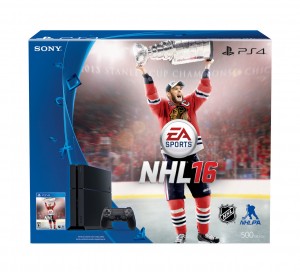 The price cut goes into effect tomorrow, Friday, October 9th. At that point, the console will sell for $429.99 CDN, and $349.99 USD. Sony is also discounting all of the bundles that are either already available, or planned to be made available for the Holiday season. This includes the recently-released NHL 16 bundle that will now retail for just $429.99 CDN, and is only sold in Canada.

The price drop is primarily meant to coincide with tomorrow’s game and console bundle release for Uncharted: The Nathan Drake Collection, which will retail for $74.99 CDN by itself, and $429.99 CDN in the bundle with its console. November 17th’s standard edition Star Wars: Battlefront bundle will also retail for $429.99 CDN. Some slightly pricier bundles are also on the way this Holiday, including the limited edition variation of the Star Wars: Battlefront bundle of November 17th, and a limited edition Disney Infinity 3.0 bundle that will launch on November 13th, both of which will be priced at $469.99 CDN. The highest-priced PlayStation 4 bundle for this Holiday will be a limited edition Call of Duty: Black Ops III bundle, which will launch alongside the game on November 6th, and will retail for the mean price of $499.99 CDN.

Sadly, the price cut isn’t removing the premium price on the PlayStation 4 that was made exclusive to Canadian territories shortly after the console’s November 2013 launch, which Microsoft refused to implement with the competing Xbox One, and Nintendo refused to implement for the competing Wii U. Still, if you’re thinking of giving that special someone a PlayStation 4 for the Holiday Season (or even just yourself), the price cut should hopefully take some of the pressure off, especially since it’s long overdue.

Keep revisiting Eggplante for all news and updates on console price drops.