Microsoft sat down with Rise of the Tomb Raider‘s Creative Director Noah Hughes to discuss the game’s downloadable content, replayability, and microtransactions.

Downloadable content will take the form of multiple components all wrapped into a season pass. It will include a new difficulty level called “Endurance Mode”, a new tomb called “Baba Yaga: The Temple of the Witch”, and in-game content such as outfits, weapons, and Expedition Cards (more on those later) which will continue for four months. It will also include a mode called “Cold Darkness Awakened” in which Lara will combat waves of infected predators in what sounds like Horde- or Firefight-style gameplay from Gears of War or Halo, respectively.

Individual prices for the content have not been released, but it seems a little thin to begin selling that stuff as piecemeal, anyway. 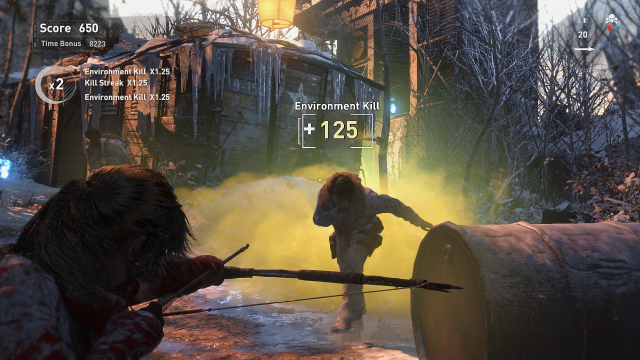 There are also other game modes included with the game that will help extend the main single-player experience but also add in an element of social gaming.

After the original Tomb Raider‘s multiplayer mode was universally panned as unsuccessful, the team at Crystal Dynamics has said that Rise would not feature a traditional multiplayer experience. However, the studio is including a few new modes that will allow players to challenge their friends to beat their own scores in certain areas of the game. The three modes include:

Between the “estimated 30+ hours to gain 100% completion on the single-player story, and our four difficulty levels including the brutally challenging Survivor difficulty”, Hughes is “confident there’s enough replay value for all of our fans.”

The Expedition Cards mentioned are a new game modifier in Rise of the Tomb Raider, meant to further customize the player’s experience as Lara. Outside of the main story, these cards will allow players to access new abilities and modifiers, such as Big Head Mode, one of the aesthetic modifiers.

Examples of the Expedition Cards (and Score Attack).

Cards will come in two varieties–common and foil–much like you’d expect from a real-life card game such as Pokémon, for example. Foil cards are permanent in the player’s collection and give Lara the most elaborate or advanced version of the modifier available, while common cards are single-use and typically have a much lesser effect.

Cards are “purchased” in exchange for experience credits earned by traversing the main story of the game, but can also be bought with real-life money to speed along the player’s progress or just collect all the cards. About 300 are planned to go live at launch, with more to follow in the weeks following the game’s release.

Luckily, it sounds like these cards will function like skulls in Halo: interesting modifiers and some fun (and perhaps challenging) effects are to be had, though nothing that would put Rise of the Tomb Raider in a pay-to-win scenario.

Rise of the Tomb Raider will be available in digital and retail forms, along with a $90 (USD) Deluxe version of the title that includes the game, season pass, and the “Remnant Resistance Pack” which is made up of a new outfit for Lara, a handgun skin, and a Bullet Resistance Foil Card.

Rise of the Tomb Raider launches on November 10, 2015 on Xbox One. The PC version of the game will follow in “early 2016” with the PlayStation 4 title coming to Sony’s platform next holiday, according to Square Enix.

For our impressions of the game from E3 2015, check out our preview.