After rumblings of Warner Bros., Universal and Legendary Pictures preparing a shared movie universe based around their marquee monster movie properties, the studios have now spoken up about the news. Yes, the plans to cross over the King Kong and Godzilla brands is in the works, and not only that, it’s been given the green light after all parties reached an agreement! Godzilla vs. Kong will officially hit theatres in 2020!

The exact date for Godzilla vs. Kong doesn’t appear to have been decided, but both studios have announced that the movie will be based around the organization, Monarch from 2014’s Godzilla reboot made by Warner Bros., which will serve as the origin of the shared continuity between Warner Bros.’ and Universal’s monster movie crossover. The next chapter in the shared universe will of course be Universal’s Kong: Skull Island, the latest King Kong movie reboot, which will take place in the all-new timeline of 1971. The movie is currently scheduled for release on March 10th, 2017. Godzilla 2 will then continue the saga when it releases on June 8th, 2018, once again distributed by Warner Bros.

This will be the second crossover between the King of the Monsters and the King of Skull Island on the big screen, in fact. The first was the Japanese 1962 movie, King Kong vs. Godzilla, which was a joint venture between Toho and Universal, back before the Godzilla rights were offered to Hollywood studios.

Legendary Pictures is the linking thread between the two studios in this ambitious endeavour, which is the latest attempt to build a shared movie universe, akin to the ultra-successful Marvel Cinematic Universe by Disney and Marvel Entertainment, which is currently the most financially successful movie franchise in history, surpassing the Harry Potter movie saga as the record-holder a couple of years ago. Universal is also attempting to build a shared universe between their Universal Monsters, while Warner Bros. is preparing to properly launch their own shared superhero movie universe based around their own DC Universe next year, which began in 2013 with Superman movie reboot, Man of Steel.

While Legendary Pictures will be involved with all of the movies pertaining to this shared monster movie universe between Godzilla and Kong, Warner Bros. will retain ownership of the Hollywood film rights to Godzilla, owned in its native Japan by Toho, while Universal will retain proper ownership of the King Kong movie franchise, and new Kong canon. Godzilla vs. Kong will be a collaborative effort between Warner Bros. and Universal. Despite Legendary Pictures also working with Warner Bros. on the Godzilla movies however, they will remain a second-party studio to Universal, which was a new deal for the studio that was finalized last year, upon Legendary not renewing their second-party agreement that they previously held with Warner Bros. since the previous decade. 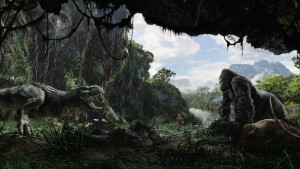 Don’t think that this shared universe will end with Godzilla vs. Kong however! Barring potential for sequels to the crossover, the studios have also teased that there are more monsters in the works for the universe. Obviously though, there was no word on whether other recognizable monster personalities may be next in line. We do have confirmation however that Monarch will serve as the S.H.I.E.L.D. equivalent of the shared movie universe, essentially dealing with the monster threats as a common nexus between the movies, and positioning them as the larger-than-life heroes of this new franchise endeavour.

Keep rampaging to Eggplante for all news and updates on Godzilla, Kong and their shared universe.