UPDATE 2: Bummer. 20th Century Fox and Marvel have both just issued statements claiming that Den of Geek’s report is false, and that the Fantastic Four rights haven’t changed hands at this time. Does this mean that the Fantastic Four are not entering the Marvel Cinematic Universe any time soon? Not necessarily. Remember that Sony denied rumours of the Spider-Man deal with Marvel several times, before coming out with it mere weeks later, namely the scoop that Spider-Man would debut in the MCU during Avengers: Infinity War – Part I in 2018. Obviously, we now know that Spider-Man will actually debut in the MCU next year, in Captain America: Civil War, so Sony wasn’t technically lying about the denial. Similarly, Den of Geek may have gotten the details wrong, but Fox’s dire Fantastic Four situation hasn’t changed, and just because the exact parameters of the report are incorrect on the arrangement, doesn’t mean said arrangement may not be being negotiated in secret. We’ll have to see.

Marvel and 20th Century Fox have been said to be butting heads lately, with Fox refusing to give up the film rights to X-Men and Fantastic Four, and Marvel retaliating by phasing out the presence of the Fantastic Four and the X-Men in the Marvel Comics Universe, even going as far as to cancel their long-running Fantastic Four comic series that has been ongoing since the team was first introduced in 1961! Even mutants overall have been largely pushed aside in the recently rebooted Marvel Comics canon, with Marvel substituting the Inhumans as the accidental super-powered common folk that everyday people have come to distrust and fear, as well as placing high-profile Inhumans from Marvel lore into high-ranking positions on teams like The Avengers for the first time. Likewise, the Marvel Cinematic Universe has used ABC television series, Agents of S.H.I.E.L.D. to position Inhumans as a stand-in for mutants in the MCU, essentially turning them into everyday people that suddenly develop powers against their will, just like mutants.

Well, despite all that nonsense, it appears that rumours of Fox and Marvel’s bitter fight may have been a tad exaggerated. While Fox is still clinging to the Marvel film rights they have, and Marvel is still disinclined to actively give free promotion to Fox’s film properties in the comic book space, the two companies have issued a joint statement confirming that they will be working together on not one, but two X-Men movie spin-offs in the television space! This comes on the heels of Fox confirming a few months ago that they were trying to negotiate with Marvel for the television rights to X-Men, as they only own the movie rights for those characters.

The first proposed series, which is being planned for FX, and has already gotten a pilot order, is called ‘Legion‘. Marvel fans would no doubt know that name as belonging to Professor Xavier’s mentally disturbed son, David Haller, who goes by the mutant moniker, Legion. Sure enough, this series will be about Haller, who struggles with schizophrenia and overall mental illness, believing himself to be crazy, until a chance encounter with a fellow patient convinces him that his visions may actually be more real than he realizes. The series will be executive produced by X-Men movie producers, Lauren Shuler Donner, Bryan Singer and Simon Kinberg, with Marvel Television’s Jeph Loeb and Jim Chory also executive producing, alongside Fargo’s John Cameron. Fargo showrunner, Noah Hawley will write the ordered pilot episode, and also serve as an executive producer.

Since Legion is a spin-off of the X-Men movies, it’s possible that Patrick Stewart may cameo as Professor X at some point, or perhaps the younger incarnation played by James McAvoy, though obviously, this is not confirmed by Fox or Marvel at present. It’s unknown how large a role Xavier may play on Legion, if any.

The second series, which has also apparently received a pilot order, and is planned for FOX (which ironically already airs a series inspired by Marvel’s rival DC Comics, that being Gotham), is Hellfire. Unlike Legion, which would presumably take place in the near future timeline of the original X-Men movie trilogy, Hellfire will explicitly be a spin-off of 1960’s-set movie, X-Men: First Class. The series will obviously deal with the Hellfire Club, who were a minor presence in X-Men: First Class, and will continue to take place in the 1960’s. The lead character will be an unnamed special agent who learns that a woman with extraordinary abilities (obviously, a mutant, though mutants are not widely known to exist yet at that point in the canon), is colluding with a clandestine society of millionaires to take over the world. Obviously, said society is the Hellfire Club, who are indeed a secret society in Marvel lore who often make shady rackets with mutant baddies, and in the case of the comics, do have mutants among their ranks. The Hellfire Club often serve as among the biggest recurring enemies of the X-Men, possibly second only to the rogue faction of arch-nemesis, Magneto’s Mutant Brotherhood. 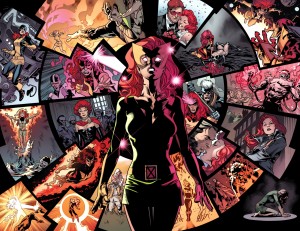 While this is exciting news for X-Men fans, the collaboration on these two shows may be a boon for Fantastic Four fans as well. Negotiation is a two-way street after all, and if Fox has been pleading with Marvel for the television rights to X-Men for however long, it wouldn’t make sense for Fox to suddenly refuse to play ball when Marvel inevitably asks for the Fantastic Four movie rights back, or at least the chance to work with Fox so that they can share them, and bring the Fantastic Four characters into the shared Marvel Cinematic Universe, a la Sony’s deal with Marvel that finally got the Spider-Man personalities invited into the MCU.

While Marvel fans are largely content with Fox currently holding the X-Men movie rights, due to the high quality of most of Fox’s X-Men movies, the demand by fans for Fox to return the Fantastic Four movie rights to Marvel has skyrocketed, with all of Fox’s Fantastic Four movies largely being negatively received, since their first run began in 2005. This came to a head after this past August’s disastrous release of Fox’s attempt at a Fantastic Four reboot movie, which received scathing feedback from both critics and fans (including us), was plagued by production issues and disputes between Fox and director, Josh Trank, and ultimately became the Summer’s worst box office bomb, making a pathetic $56 million domestically, and only managing a low $110 million gross in international territories.

Despite producer, Simon Kinberg still writing a treatment for a sequel to this year’s Fantastic Four reboot, which has a release date reserved in 2017, most parties involved with the reboot are pessimistic about the prospect of a follow-up. If Fox fails to produce a sequel for its reserved date, creative control over the Fantastic Four characters in the movie space will likely revert to Marvel automatically, as was the case with The Hulk and related personalities when Universal failed to get Hulk 2 into production before the 2005 deadline. It’s quite possible that this X-Men television deal was reached when Fox saw the grim reality of the Fantastic Four situation, and likely tried to offer Marvel creative control over Fantastic Four and the chance to bring them into the MCU, as a bargaining chip in exchange for the chance to make television spin-offs for the X-Men movies. This would theoretically avoid Fox likely losing creative control over the Fantastic Four movie rights with nothing gained, since the odds are extremely against Fantastic Four 2 ever being funded and green-lit, let alone being accepted by the public.

That’s obviously speculation on our part, with no official confirmation, but the evidence is there to suggest that this is probably what Fox offered for the X-Men television deal, since Marvel obviously wouldn’t just give out television rights to X-Men for free, and given how much fat cash they’ve raked in on the MCU, they’d probably want more than money from Fox. On that note, this deal may also explain why some confusion happened during the recent New York Comic-Con 2015, with a rumour sparking that Marvel’s Inhumans movie, currently scheduled for June 12th, 2019, was being cancelled, mistakenly attributed to an apparent feud between Marvel’s movie and television divisions (pretty flimsy evidence, honestly), though Marvel reps shot it down soon afterward, confirming that Inhumans is still in development. The movie was still missing from Disney’s recent Phase Three movie outline however, possibly suggesting that Inhumans is being bumped into Phase Four, which begins in 2020, with three unnamed movies.

It’s quite possible that Inhumans may have been quietly delayed to one of the 2020 dates, because Fox and Marvel may have agreed behind closed doors on an MCU-set Fantastic Four movie for the June 12th, 2019 date. Similar to the Sony deal allowing the chance to have Spider-Man for next year’s MCU movie, Captain America: Civil War, before the Web-Slinger moved back the entire upcoming Phase Three slate from mid-2017 onward to make room for his own MCU-set solo reboot in 2017, Marvel may wish to introduce the Fantastic Four into the MCU before the Inhumans movie, due to the Fantastic Four’s heavy association with the Inhumans in Marvel lore. This may allow Inhumans to use more story elements from Marvel Comics that would otherwise be off-limits, due to the Fantastic Four rights being at Fox.

Since the Fantastic Four reboot from Fox would no doubt need to live out its (likely paltry) home viewing sales for the Holiday season, it’s likely that Fox would no doubt not want to announce the deal on the rights (or simply selling them back) until next year, much like how Sony and Marvel sat on the Spider-Man deal’s announcement for a few extra months, to allow The Amazing Spider-Man 2 to exhaust potential home viewing sales first. This would also explain why Marvel didn’t shoot down the Inhumans cancellation rumour more publicly, and simply had their reps do it informally to all inquiries, since they couldn’t address the Inhumans rumblings in a big public way, without violating a possible NDA that they made with Fox about a Fantastic Four movie that would necessitate a delay and tweaking of Inhumans.

This is all just one big elaborate theory from us, and we’ll see whether any of it turns out to be true, though Fox has also been pretty quiet about Fantastic Four 2 as well, considering that they’d need to be hurrying up with production to meet that 2017 deadline. Just saying. In the meantime, keep mutating Eggplante for all news and updates on the X-Men movies, and their television spin-offs.