Brooklyn Nine-Nine continues to operate comfortably with “Boyle’s Hunch”, an episode that has a good share of laughs, but doesn’t overtly stand out in any particular way. Still, that means that the episode doesn’t really do anything wrong either, beyond the main plot feeling a little rushed.

The backbone of the episode comes from Boyle meeting a woman that he has a lot in common with, played in a great guest part by Mary Lynn Rajskub of 24 fame, only to learn that she’s been sentenced to ten years in prison for fraud. Boyle has a hunch that the woman, Genevieve is being framed however, and he ropes a doubting Peralta along to clear the name of the woman that he’s so infatuated with. 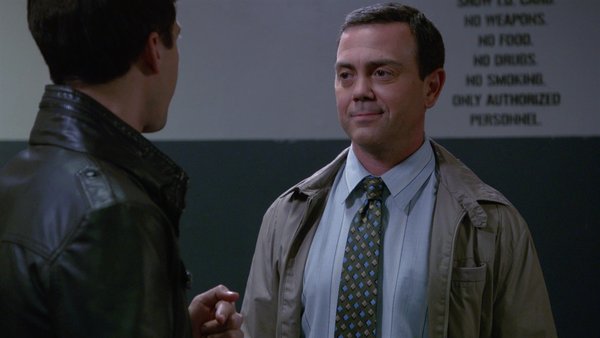 As much as Boyle felt like he was moving backwards during last week’s episode, upon declaring that he was going to go back to being an emotional sad sack, I was happy to see that the show gave him a great new potential love interest, to compensate. Mary Lynn Rajskub was very charming and amusing as Genevieve, even if she only had a couple of scenes in the end, and I think that Rajskub and Joe Lo Truglio would actually be paired very well. We’ll have to see how their inevitably goofy relationship unfolds, but for now, I’m happy that Boyle has another shot at love.

That’s why it’s a bummer that, despite being the main plot, the Boyle/Peralta story felt half-baked and rushed through. Perhaps it’s overly ambitious to resolve this entire misunderstanding in the span of a single half-hour episode, but Peralta’s reasons for doubting Boyle, while justified, never presented any kind of obstacle for Boyle. Peralta still went along with Boyle’s investigation, never questioning how unlikely their positive result would be, and, even if this did lead to some good jokes, the big case of Genevieve’s framing didn’t really satisfy. The resolution to the case was also very rushed, with the true culprit being the assistant of Genevieve’s ex-boyfriend, motivated by some rather flimsy reasoning, and this was awkwardly tossed in right in the final two minutes of the episode, with Genevieve not even being properly sprung yet. Lame.

Fortunately, this was another episode where the subplots excelled, though one was a bit stronger than the other. The highlight story came from Diaz and Jeffords, with Diaz approaching Jeffords and complaining that Scully and Hitchcock have been stealing her ice cream, and lying about it. The show even remembers to mention Marcus for a change, albeit only once. With Jeffords teaming up with Diaz to solve the case of the missing ice cream, they grill Scully and Hitchcock, but these two apparent idiots constantly outwit them.

The show has flirted with the idea of Scully and Hitchcock actually being secretly brilliant, and only allowing the precinct to think that they’re useless idiots because their real problem is that they’re extraordinarily lazy. This was touched upon again with this subplot, with hardened, intelligent detectives like Diaz and Jeffords being tripped up more than once by the shiftless duo.

The episode’s best jokes easily came from this storyline, and the resolution was downright hysterical, with Diaz and Jeffords thinking that they nailed Scully and Hitchcock after believing they’ve slipped up with a lactose-intolerance claim. After Diaz and Jeffords buy them pizza to expose them, they learn that the two really are lactose-intolerant, but they ignore it because of their junk food addiction, and afterward, they do fess up to stealing Diaz’s ice cream. Despite that supposed victory however, the two soon run into the bathroom to no doubt do some disgusting business from the pizza, and Jeffords is left to try and celebrate Diaz on her win. The perfect resolution and overall best joke of the episode was then delivered when Diaz simply replies, “There are no winners here.” That was incredibly funny, and very fitting. 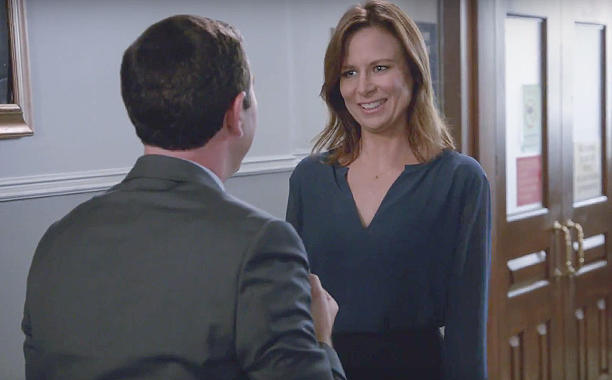 Rounding off the episode is the C-plot, with Santiago visiting Holt and Gina in the PR department. Holt wants to spearhead a new PR campaign for the NYPD, which has gotten a lot of bad press, and Santiago of course blindly agrees with everything he says. Gina cautions Holt that the campaign to glorify the cops is a bad idea, but Holt ignores her, and has Santiago pose for a photo, which is meant to show off a good cop.

Naturally, Gina was right, and Santiago’s picture ends up being defaced across the city in frequent and hilarious ways, with a wave of new complaints coming into the department, and the campaign officially blowing up in Holt’s face. While this plot’s jokes were merely decent, it did have another very funny result, with Gina walking into Holt’s office to say she’d never say that she told Holt and Santiago so, before turning around and showing that she’s wearing a custom T-shirt with a back that says, “Gina told you so.” This was another highlight laugh for this week, and you can always count on Gina to bring those!

Brooklyn Nine-Nine is in a nice, comfortable groove, and that means that it still functions well as a fun Sunday night sitcom. The Vulture didn’t show up at all this week, which was a bit surprising, given everyone at the precinct blatantly disregarding their workload in this episode, but the episode still delivered plenty of good humour in his absence. Boyle might have even found true love this time too! Let’s hope Genevieve sticks around, now that she’s a free woman!

Brooklyn Nine-Nine 3.3: "Boyle's Hunch" Review
Brooklyn Nine-Nine continued to move along in a comfortable groove this week, with Boyle discovering a new love interest, Diaz and Jeffords determined to resolve a petty theft in the precinct, and Holt getting a great slice of humble pie from Gina.
THE GOOD STUFF
THE NOT-SO-GOOD STUFF
2015-10-15
78%Overall Score
Reader Rating: (0 Votes)
0%