reIf you live in Europe, Australia or Japan, you’ve been able to enjoy Yoshi’s Woolly World since this past Summer. In North America however, the game isn’t out until the end of this week, after a wait of several additional months for us Canadians, and our neighbouring Americans. Fortunately, I recently got some hands-on time with a pre-release demo of Yoshi’s Woolly World, where I got to try out the anticipated Wii U exclusive, and see how the first console Yoshi platformer since the 90’s stacks up.

The first thing that will surprise you about Yoshi’s Woolly World? It’s actually pretty damn challenging in some places! The game is one of those deceptively cute and colourful platformers that masks its true nail-biting gameplay, like how they made them in the 90’s, or, in Nintendo’s case, much like their recent string of Mario and Donkey Kong Country hits that have thankfully continued to thrive on their modern platforms. Another thing that will probably have you underestimating the game is the fact that it feels like a spiritual successor to Kirby’s Epic Yarn on the Wii, a game that was so breezy in difficulty that you couldn’t even die!

Well, you can die in Yoshi’s Woolly World, so don’t expect a cakewalk. The cute Yarn Yoshi characters can meet their demise in bottomless pits, or if they take too many hits from enemies. The Yoshis’ health is indicated by a ring of hearts surrounding them, which can be restored with a handful of well-placed health pick-ups, though they’re not in insane abundance, if you’re careless. If you want to play Yoshi’s Woolly World as a proper platformer, it’s a lot tougher than you’d think, even for a hardcore gamer!

Fortunately, this doesn’t mean that more casual gamers are left out in the cold. Yoshi’s Woolly World allows you to pick between a ‘Classic Mode’ and a ‘Mellow Mode’, which my demo also offered the choice between. Mellow Mode allows players to hold the A Button to have their Yoshi hover in place, helping them with a few of the game’s trickier platforming obstacles. It doesn’t move Yoshi higher, and if you’re already too low to get to a safe platform, you’ll just have to eat the pit, plus, it doesn’t protect you from enemies and taking damage from them either. For casual gamers and young children who may find the Classic Mode frustrating however, Mellow Mode is a welcome addition, and I gave it a spin to see if it breaks the gameplay. It doesn’t. It just takes away some of the stress that would otherwise be involved in the game’s more difficult stages. If you’d rather maximize the challenge, Mellow Mode can be completely ignored.

When you’re playing in Classic Mode, the Yoshi’s are limited to their usual set of abilities. They can gobble up enemies with their long tongues, and generate yarn balls that follow them around (which take the place of the eggs you would normally see in a Yoshi platformer), they can throw said yarn balls with the X Button to attack enemies and hit ? Clouds for items and events, they can hover for a second if you hold the A Button after a jump, and they can ground-pound if you press Down on the Control Pad while they’re in mid-air. I tried out Classic Mode by playing with both the Wii U Gamepad, and just a lone Wii Remote, and both methods feel pretty comfortable, though casual players on Mellow Mode might find the Wii Remote to be just a bit more intuitive, where it can simply be held sideways, and allow players to use the 1 Button to extend Yoshi’s tongue and the 2 Button to jump. This elegant simplicity in the Wii Remote controls is especially noticeable when you have to actually turn the Wii Remote to turn a key using the motion sensors in some areas, which is fine on the Wii U Gamepad, but definitely feels less awkward with a Wii Remote. You do have to aim your yarn balls by tilting the Wii Remote in that case however, which is novel at first, but can be a tad annoying after a while.

As for the stages offered in the demo, there were three of them. The first was a simple plain-like area, where I could get used to the controls, and how the game felt to play. This was definitely the most conservative of the stages on offer, and felt like it was taken directly from the style of Super NES classic, Super Mario World 2: Yoshi’s Island, only this time, without the demand of a screaming Baby Mario to worry about. Yoshi himself however had his usual cute voice prompts, and the music, while understated, suited the comforting, friendly nature of the game very well.

I quickly became impressed with the very infectious and inspired art style, which immediately gives Yoshi’s Woolly World an irresistible, timeless feel, something that Super Mario World 2: Yoshi’s Island, Yoshi’s New Island and Yoshi’s Story also pulled off very well. This is one of the most visually striking Wii U games to date by the look of things, and actually playing it on a 1080p HD display is pretty breathtaking, I must say! The game is loaded with that reliable Nintendo charm, as Egg Blocks are morphed into yarn baskets, enemies unfurl into strands of wool as you lick them up, and environments can literally be pulled apart at the seams in some places, to reveal new passages, and hidden goodies. Collectible Beads are strewn throughout levels, along with several other collectibles, including the usual Flowers from most Yoshi platformers, along with little smiling Yarn Packs, and Miiverse Stamps that feel like they function like the Red Coins from previous Yoshi platformers.

Every level is littered with collectibles, as is expected of a Yoshi platformer, and while many are in plain sight, some are quite deviously hidden! This was especially true in the demo’s second stage, which was a maze-like yarn fortress that had me managing enemies, yarn balls, and having me also trying to stumble upon hidden ? Clouds that I could throw yarn balls at to open new passages, which were usually somewhere in the vicinity whenever I found myself going in circles. Like I said, the stage design in Yoshi’s Woolly World is more tricky than you would think. Even in Mellow Mode, you have to use your head in some places, and figure out how to proceed forward by paying attention to details, and noticing when something isn’t right in the environment.

It was the third and final stage where I really found my skills put to the test however, and this was also my opportunity to test out the two-player co-op mode in Yoshi’s Woolly World! I took up Wii Remote controls, while the Wii U Gamepad went to my previewing associate that joined me for the demo. I was a Red Yoshi, and she was the normal Green Yoshi.

Co-op is about what you would expect it to be in a game of this nature. You have two Yoshi’s instead of one, and both of you can look out for the other by rescuing them from an egg whenever they fall down a pit, or are defeated by an enemy. It’s not dissimilar to the co-op of the New Super Mario Bros. games that have released from 2009 onward, only, with perhaps a bit less chaos. Frankly, the co-op mode is best enjoyed by a parent and a child, or perhaps two more laid-back players, since it feels a little unintuitive for two die-hard gamers, as one player running off of the screen results in the other player being placed into an egg and trailing the player that’s moving ahead, which can be annoying. Fortunately, you do have infinite lives in Yoshi’s Woolly World, so you aren’t kicked back to the previous checkpoint, so long as at least one player is outside of an egg, or a pit.

Luckily, my time with the co-op came during arguably the most challenging stage in Yoshi’s Woolly World’s pre-release demo, which was sort of a haunted house that had curtains constantly moving around the foreground. The curtains would generate platforms in what were otherwise enormous bottomless pits, but they would also make otherwise benign Shy Guy ghosts become invincible, so my co-op partner and I had to manage keeping pace with the curtains, but also trying to gobble up the enemies before the curtains got to them, as they were almost always strategically placed in such a way as to make traversing the platforms much more difficult. Pair that in with keeping an eye on collectibles, and you actually have a pretty devious stage, even for a game this adorable and charming!

Both of us died quite a few times before we reached the Goal Ring at the end, and you might be embarrassed to know how many ways a Yoshi platformer had us being kicked back to checkpoints, even in a duo! Playing in Mellow Mode would make the curtain situation a little bit less of a headache, especially since you could just flutter along the pit at your own pace in that case, but in Classic Mode, that stage is downright fiendish at times, albeit in that great way that motivates you to keep playing until you win. Nintendo knows platformer design, and this demo alone had some pretty inspired ideas that feel like they equally benefit both casual and core gamers alike! 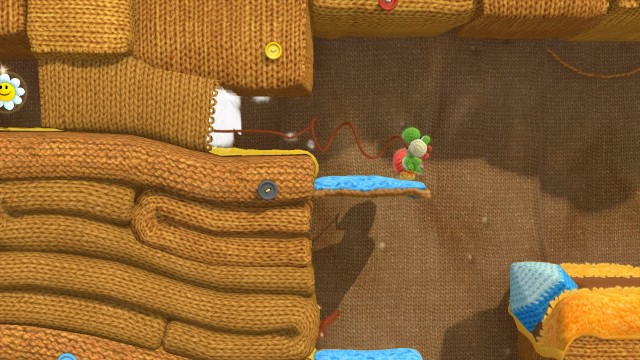 That’s the great feeling I got when my time with the Yoshi’s Woolly World demo ended. It’s a game that feels like a strong crowd-pleaser for Wii U owners, presenting a fun and relaxed experience for the casual crowd, but also allowing avid, hardened gamers to shirk the concessions and cut their teeth on a surprising degree of platforming challenge, just like Nintendo’s legendary NES and Super NES gauntlets. There’s already plenty of reviews online from the earlier PAL territory and Japanese release of the game, so you can read up on them to see how interested you may be in the game too. For my tastes though, Yoshi’s Woolly World is pleasant and challenging, and I couldn’t help but smile the whole way through!

Look for Yoshi’s Woolly World this Friday, October 16th, exclusively for Wii U.