The Walking Dead started off its sixth season on a pretty solid note, and already shows signs of fixing some of the narrative frustrations from the front half of Season Five especially. “First Time Again” picks up with Rick now officially taking control of Alexandria, and immediately facing a pretty big problem.

The episode begins with an out-of-context incident that shows a pit full of a legion of Walkers, which are gradually starting to push through a barrier of trucks. Rick and his crew have to find a way to prevent the Walkers from reaching Alexandria, and that’s how the entire episode unfolds. As with the Season Five finale, the Season Six premiere also got an extended 90-minute timeslot by AMC, though unlike the Season Five finale, “First Time Again” actually made good use of the extended timeslot, and effectively utilized the increased runtime to lay out a solid foundation for the season, going forward. 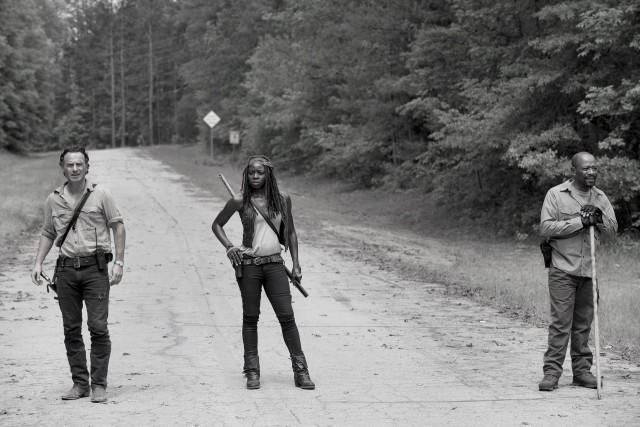 Another neat thing that this episode did is effectively differentiate two different streams of events with present day colour footage, and past monochromatic footage that shows how Alexandria responded to Rick taking over leadership. This was not only a cool stylistic choice, since the black-and-white footage sort of echoes the feel of the original Walking Dead comics, but also worked thematically as well. Alexandria is a community that has previously dealt in simple black-and-white thinking, but shades of grey and colour are introduced, when Rick and his crew now force them to face the reality of what’s around them. Honestly, it’s the most thematically engaging that The Walking Dead has been in a while!

A pessimist could accuse this episode of being meandering, and not immediately throwing new villains, The Wolves into the forefront, but I actually thought that not introducing The Wolves properly yet (though they were teased in passing conversation), and focusing instead on the group dynamic with the change in leadership, was a smart move on the part of the show. The Walking Dead has an entire season to start throwing new baddies at Rick and co. I’m glad to see the series having some restraint, and making sure to avoid some of the rushed, sloppy storytelling that plagued several portions of Season Five.

The other great part about this episode is that the dialogue was very well-written, at least for the most part. Characters respond to Rick taking over the settlement with surprising relatability, as even group mainstays like Daryl and Carol don’t immediately accept all of Rick’s methods. Likewise, while some citizens of Alexandria welcome the change, others speak out against it. Given the sloppy non-climax that Season Five ended on, this is wonderful, since it feels like the writers are now more accurately portraying a shift in power within a small community. This was best displayed through Rick’s dialogue with Morgan as well, with Rick and Morgan speaking the most candidly about what’s ahead, and characters like Morgan, Michonne and Daryl nicely preventing Rick from going over the edge. He’s still an angry man after all, and there’s a genuine sense of unease about him getting all this power, when there’s still the question of whether or not he’ll abuse it.

The only sticking point here was the fact that, despite most of the dialogue being well-written, some of it was also kind of on-the-nose. The amount of times that characters spelled out, “Rick was right!” was a little bit silly. It stunk of the show talking down to its fanbase, and treating them like they’re stupid. Moreover, it also excessively plays up Rick as a messiah figure, to a fault. Yes, Rick will likely prove to be a saviour for Alexandria, but you can’t put the guy on that much of a pedestal after some of his actions last season. Even the episode itself pointed that out several times! The show should probably take it down a notch with glorifying Rick. We get it. He’s going to save Alexandria. You don’t need to constantly remind us of how lucky the community is to have Rick Grimes leading the charge now.

Throughout the episode, we see some shocking and heartfelt moments, all of which are pretty great. Tara finally wakes up from her coma, and must process that Noah died while she was incapacitated. Glenn forgives Nicholas, and tries to groom him as a new ally, though Maggie and Tara conspire to get Nicholas exiled. Sasha and Abraham bond over their shared losses. Morgan begins feeling his way around the other characters. Most recognizably of all, the Alexandrian citizens are blending in more seamlessly with Rick’s group now. The assimilation has officially taken place.

Even as most of the episode debates Rick’s risky plan to use cars and plating to lead Walkers away from the community, the episode is really sold by this collection of well-executed character moments. Some particular highlights include Rick refusing to allow Pete to be buried in Alexandria, and Deanna agreeing with that call (though this does helpfully lead to the discovery of the imminent Walker disaster facing the community), several Alexandrians conspiring to murder Rick due to his usurping of power, Jessie refusing to allow Rick to train her son to fight Walkers, and Carol putting on a happy face for the community, and being recognized by Morgan as someone who is not what she seems. Glenn even teams up with Nicholas, and a newcomer named Heath, and they manage to succeed at taking out a building full of Walkers with no fatalities. Yes, Glenn is still not dead. AMC is still clearly having too much fun screwing with everybody who thinks that he will die soon. Also, yes, I’m aware that Heath is a big character in the Walking Dead comics, and is probably being set up as a new mainstay for Rick’s group in the TV series, but so far, he’s merely introduced as a citizen of Alexandria that’s been away, and currently has no background. 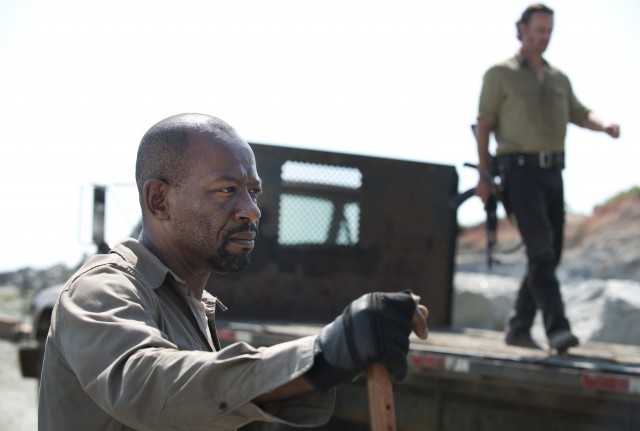 In fact, speaking of characters coming and going, this season premiere didn’t actually see any of the core group members killed, though that’s probably for the best, as killing characters would have immediately led into cracks with Rick’s leadership, and we’d start re-treading Season Five material. The only casualty was Carter, the ringleader of those conspiring to kill Rick, and yet another character that was simply introduced to inevitably become Walker chow. Carter has his face munched on by a Walker during Rick’s operation, forcing Rick to put him down to silence his screams. This move disturbs Morgan, even if he understands that it was necessary. Is some of this anti-Rick sentiment going to end up surviving in Morgan? I guess we’ll have to see.

Regardless, the episode ends with a loud horn blaring from Alexandria, right as it appears that Rick’s plan was going to successfully lead the Walkers away. The legion of Walkers begins to shamble towards Alexandria, and that’s where the episode concludes. Looks like Alexandria is going to be in big trouble soon! Who could be behind the desire to destroy the community though? I guess we’ll have to find out next week.

“First Time Again” started Season Six of The Walking Dead off right, focusing on characters first and foremost, yet also not skimping on Walker action or spectacle either. The interplay between past and present was well done, and it was good to see that not all of Alexandria has suddenly aligned unquestionably under Rick. The community’s days may be numbered though. Rick’s been training the community for a day like the one that’s about to happen, but are they ready for what’s to come?

The Walking Dead 6.1: "First Time Again" Review
The Walking Dead started off its sixth season on a strong note, with an extended episode that focused on great character dynamics and dialogue, and an effective interplay between past and present that sees Alexandria's foundations challenged like never before!
THE GOOD STUFF
THE NOT-SO-GOOD STUFF
2015-10-14
90%Overall Score
Reader Rating: (0 Votes)
0%