The Big Bang Theory attempted a big shake-up with Leonard and Sheldon this week, but for the most part, “The 2003 Approximation” felt pretty middling. The jokes were good, and they carried the episode just fine, but the story material felt a little bit shallow this week. Considering the attempt to really take Sheldon out of his comfort zone, it was disappointing to see the series ultimately wimp out of really changing the character dynamic with Leonard’s living situation, now that he’s married to Penny.

The title of the episode comes from Leonard deciding that he’s officially no longer going to be Sheldon’s roommate. He signs over the apartment key (which Sheldon gives back to him anyway), and rescinds ownership of the couch to Sheldon, but naturally, Sheldon doesn’t take the change well. He responds by acting as if it’s 2003 again, attempting to rewind time to before he met Leonard.

Again, this led to some solid gags, particularly when Amy surprisingly tries to defend Sheldon’s state of mind to Bernadette, only to have a quick transition to Sheldon having emptied his apartment, and fully settled into his 2003 delusion. Leonard dropping the key onto a cabinet space that is no longer there was even funnier, which was a nicely subtle jab at how little has changed in the apartment with Sheldon in over a decade.

Unfortunately, the whole discomfort with Leonard moving out simply amounted to a bunch of silly jokes, and ultimately concluded with Leonard and Penny simply deciding to keep Leonard in the apartment. Again. Sure, the odd time, Leonard would sleep at Penny’s, but how is that different than the arrangement he had in place already? It isn’t. Like I said, it was a bummer that The Big Bang Theory ultimately wimped out of continuing to push Sheldon forward, though I suppose he did just lose his relationship with Amy, so maybe the showrunners were concerned about too many drastic changes happening too quickly. At least the good humour helped to compensate for the lacklustre main plot of the episode as well.

“The 2003 Approximation” also contained a subplot with Raj and Howard, with Stuart asking if they know of any musicians that could play in the comic book store, and Howard suggesting that Raj become a bandmate of his for ‘filk’ music, which is a kind of folk music with a fantasy/sci-fi bend. After reviving an old middle school idea of Howard’s, to start a filk band called, “Footprints on the Moon”, Howard and Raj begin writing a song about a hypothetical battle between Thor and Indiana Jones.

Naturally, this just led to more silliness, and didn’t really make a lasting impact on the dynamic of the series at large, but it’s good to have the show bringing back some more of the geek humour at last. Season Nine has been oddly bereft of it so far, and I’m glad to see that The Big Bang Theory hasn’t completely forgotten its roots in an effort to stay fresh and relevant as its characters grow up and face new challenges. Part of the charm of the series is, no matter where life takes these guys, they’re still nerds at heart, and that will never change. There may not have been much to this subplot, but at least it was a pleasant reminder that the leads can only grow up so much, even if Howard and Raj never really reached a real conflict.

We even got a return from Emily, Raj’s girlfriend! Wait, didn’t they break up at the end of Season Eight? It sure looked that way, but apparently, they didn’t, and the show is just acting like Raj getting busted for wanting to dump her just didn’t happen. That’s a bit weird, though it’s good to see Laura Spencer listed in the main credits now. Maybe that means we’ll actually start seeing Emily more regularly, since one of the problems with Season Eight was that the show just seemed to remember or forget Emily at random, depending on what was convenient for that week’s Raj plot. On another note, it’s also funny to see that Raj is not the only person who notices Emily’s creepy side, when Sheldon claims that she’ll eventually murder Raj, and ruin the social dynamic after confessing where she hid the body. 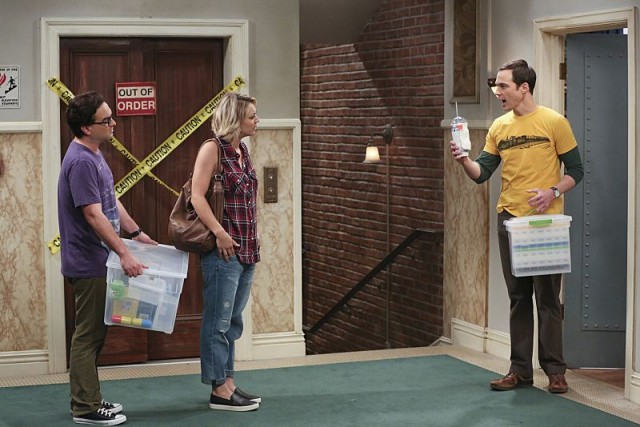 Overall though, “The 2003 Approximation” felt a tad anemic, being a funny, but mostly unremarkable episode that backpedaled on having an actual impact on the series, despite setting up for another big shake-up. The good jokes kept the episode afloat, but in terms of continuing the character development, it felt like the show sadly stalled with this week’s offering, and ended up clinging to the past as much as Sheldon was.

The Big Bang Theory 9.4: "The 2003 Approximation" Review
The Big Bang Theory had a solid helping of strong jokes this week, but the actual storytelling was disappointingly lacklustre, with the series ultimately wimping out of another big change for Sheldon, and backpedaling on Raj's apparent break-up with Emily.
THE GOOD STUFF
THE NOT-SO-GOOD STUFF
2015-10-15
74%Overall Score
Reader Rating: (0 Votes)
0%