After taking the season premiere to get Oliver and Felicity back to Star City, “The Candidate” started laying the bulk of the groundwork for what to expect on Arrow this season. Two major additions were made to the cast, one for the heroes’ side and more than one for the villains’ side, and the conclusion of the episode also has two major developments, even if press for Legends of Tomorrow would have already tipped fans off to one of them.

Regardless, Jeri Ryan of Star Trek: Voyager fame guest stars as an old Queen family friend, Jessica Danforth, who wants to run for mayor, despite all of the mayors that have been killed in recent times within the city. Knowing the true scope of Damien Darhk’s plan for city management, Oliver and Thea try to talk Danforth out of running, but she is unswayed, announcing her candidacy. At a big rally however, Danforth is targeted, as the Ghosts return, and Oliver and Thea just barely prevent Danforth from being kidnapped and/or murdered.

The operation wasn’t just the idea of Darhk however, as he’s employed a young criminal mastermind, Lonnie Machin, to spearhead the effort to scare Danforth out of running for mayor. If you’re a DC fan, and particularly a Batman fan, you might recognize Machin, as he’s the DC Television Universe’s rendition of Anarky, a character whose name pretty much says it all. The character is heavily retooled for Arrow, mind you, not even sporting his costume, and largely not resembling his comic book counterpart in any way so far, but it looks like more DC-faithful developments will come for the character later this season. Fortunately, Arrow avoided the urge to make Anarky a shallow villain-of-the-week, instead setting him up as a bigger character with larger designs on Star City, and that’s great to see!

After failing to remove Danforth for Darhk, Anarky instead kidnaps Danforth’s daughter, Madison, prompting Oliver and Thea to don their masks and hoods and go out grilling scumbags. Naturally, Thea is still working on some rage issues, and ends up breaking a crook’s arm in a fit of rage, before Oliver drives her off. Clearly, Malcolm Merlyn’s warnings about the Lazarus Pit are starting to become more and more apparent. Thea even finally confesses to Laurel how she was revived by the Lazarus Pit last season, and, you can no doubt see where that’s going. Sure enough, Thea and Laurel dig up Sara’s corpse right as the episode ends, with Laurel announcing that she’s going to go with Thea to Nanda Parbat, to dip her dead sister in the Lazarus Pit!

As Danforth broadcasts a media message to plead for the safe return of her daughter, and Oliver continues to seek information on where to locate Anarky, Captain Lance pays a visit to Darhk, saying that kidnapping an innocent girl was not part of the deal, and he’s out. Darhk however threatens Laurel’s safety to keep Lance in compliance, and confesses that the abduction was not his idea, even giving Lance the exact address of where to find Madison. I must say that Darhk is proving to be a very interesting villain for Season Four, since he has his own twisted moral code that gives him some level of regard for human life. Darhk doesn’t seem to kill when he doesn’t feel that it’s necessary, and he also won’t authorize someone’s suffering when it’s not merited. Already, it sounds like he’s going to take the best elements of Ra’s Al Ghul from last season, and cut out elements of Ra’s that didn’t work for Arrow. That seems like a promising direction, given some of the lost potential with the League of Assassins storyline in Season Three.

Oliver and Thea manage to locate Anarky before Lance and the SCPD do, and this results in what’s honestly a pretty cool climactic fight for the episode! Thea even has another fit of bloodlust, and lights Anarky on fire! Damn! He just keeps fighting too! What a beast!

Eventually though, Lance shows up and arrests Anarky, mistakenly believing that Oliver was the one who tried to immolate the perp, later reprimanding him for it. Clearly, Anarky’s no worse for wear however, as he manages to escape police transport, brutally murders the cops escorting him, and leaves his trademark “A” symbol from DC lore as a calling card. Clearly, Anarky will be back, and he might be as much a foe for Damien Darhk as he will be for Team Arrow!

This main plot was generally very good, though Danforth decides to step down after she gets her daughter back, and that felt like a waste of Jeri Ryan. This does result in Oliver deciding to run for mayor however, which is a very cool nod to Oliver’s turn as mayor of Star City in DC lore, so that should present some very interesting new material for the show this season!

Felicity also got a pretty big plot this episode, even if it was away from the action. She’s finally been called in to oversee Palmer Technologies, though struggles when the board forces her to fire a bunch of employees. She does however strike up a friendship with Michael Holt, a slightly re-tooled version of DC hero, Mister Terrific, though for now, he’s just Michael Holt. Unfortunately, Holt is one of the people that she has to fire, though she later uses one of Holt’s ideas to hire everyone back, and bluff about a promising new project from Holt that will restore Palmer Technologies’ failing fortunes! Could this be a lead-in to the development of T-Spheres from Holt, like in DC Comics? Boy, I hope so! Felicity’s plot largely just felt like a way to introduce Holt, who will obviously be a recurring character this season, but it still made for a solid introduction to a promising new DC hero presence to come on Arrow.

Similarly, this week’s flashbacks also just mainly felt like a way to introduce another crucial character for this season, in this case, Reiter. Reiter is supposed to be another re-tooled DC character, in this case, DC villain, Baron Blitzkrieg, now re-imagined as a warlord who is oppressing a settlement of people on Lian Yu. It’s a very, very loose version of Blitzkrieg, who doesn’t seem like he’ll ever develop the character’s abilities in DC lore, plus, he’s not even German to boot. Why not just make him an original character then? Oh well, as long as he leads to better flashbacks in Season Four than what Season Three delivered, I’ll accept him. 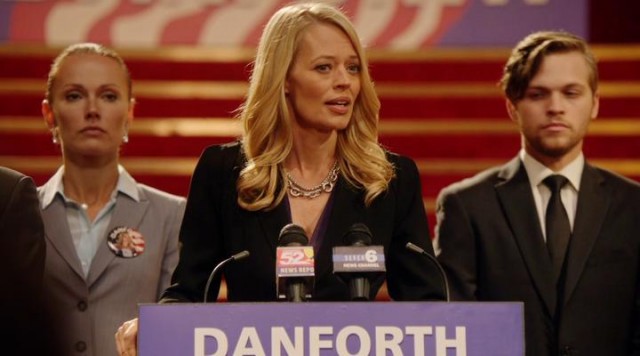 “The Candidate” did a good job of laying out the necessary groundwork for the progression of Arrow’s fourth season. It introduced the key personalities well, even if it felt like it was leaving most of its payoffs for future episodes. Still, Season Four of Arrow is continuing to make good improvements over the flaws of last season, and, with so many strong expansions to the cast, hopefully it keeps that up as we see where all of these events lead!

Arrow 4.2: "The Candidate" Review
Arrow laid a lot of appealing groundwork for the many developments in play for Season Four this week, introducing several promising new heroes and villains, even if the big guest star was ultimately wasted.
THE GOOD STUFF
THE NOT-SO-GOOD STUFF
2015-10-17
85%Overall Score
Reader Rating: (0 Votes)
0%