NOTE: Full spoilers for this episode of Heroes Reborn are present in this review

Dammit, Heroes Reborn, you take two steps forward, and one step back, every time you start getting interesting! That was largely true of the former Heroes series as well, past its standout first season, but it’s still so frustrating to see Heroes Reborn continue to so often stumble over plain sloppy writing. Granted, some of the big reveals in “The Lion’s Den” were satisfying, but at the same time, Heroes Reborn felt like it moved backwards this week, retreading old ground in the storytelling, and wasting too much of the viewer’s time.

Once again, it seemed like Tommy’s and Noah’s arcs turned out the best this week, especially since this is where a lot of the juicy reveals lie. We finally get some background on Tommy, whose full name of Tommy Clark is revealed, including confirmation that he’s adopted. That was actually a solid twist, given how tight Tommy and his mother appeared to be, and the strange mention of the name, “Nathan” seems to suggest that Tommy could be connected to the Petrelli family somehow.

Even then though, all we hear about Tommy, when he finally tries to confront the truth, and the penny man conveniently shows up at the same time, is, Tommy is going to save the world! Oh, for shit’s sake! Spit it out, Heroes Reborn! Even in one of the better story arcs, the characters waste time, and act needlessly secretive. If Tommy has this big destiny, why does he not know about it? What possible advantage could there be to keeping him in the dark? Maybe we’ll hear of some dire consequence for Tommy later, which his mother possibly wanted to avoid, but I can sadly see all of the bluster around Tommy having a disappointing payoff. I hope that I’m wrong, but Heroes Reborn hasn’t so far given me much reason to be assured when it promises something.

Like I said though, Noah also got a pretty solid arc this week, as we start to continue peeling back a few more layers of Renautas’ endgame. Clearly, a global disaster is on the way, and Renautas has begun capturing people and putting them in isolation, so that they can repopulate the world after most of life on Earth is annihilated. The end of the episode even bluntly confirms this, as Erica looks at a simulation of the event with her R&D crew. Finally, the whole business at the start of the miniseries with the Aurora Borealis is making a bit more sense, and Renautas’ designs on Evo technology are starting to become more frighteningly clear.

Noah even manages to corner Erica for a second, though an attack by some Harris clones causes enough chaos and poor defenses to allow Ren and Miko to get away with Hiro’s sword, which Erica has in her possession for some reason, and Harris brought to Taylor’s house, for some reason. Oh yeah, apparently that’s what Ren and Miko are really after. Why? Who knows. Honestly, these two still feel way too disconnected from the sensibilities of Heroes, and Miko’s ‘power’, if you can call it that, is still one of the dumbest powers in Heroes history, and that’s saying a lot! They’re probably going to be better tied into events when it comes time for Hiro to return for the miniseries, but for now, these characters just seem way too erratic, and way too inconsistent with the rest of the miniseries’ tone.

At least Malina is starting to fit in a little better, being some other key to saving the world, and actually being more actively pursued by Renautas forces, now that she and her mentor have made it to Canada. Her mentor even gets shot in the process of trying to get away, forcing Malina to continue her mysterious pilgrimage on her own. Oh, and apparently Malina controls wind now. Ok, seriously, what the hell are Malina’s powers?! The show is changing them every episode, and it feels like it’s just making them up as it goes along for now. Please explain what her powers are, Heroes Reborn. Please illustrate, concretely, what makes Malina so damn important.

Her entire arc this week is literally just a dragged-out way to kill off the mentor, and have Malina now journey alone, still with no real questions answered about her background or purpose. Intentionally leaving your audience in the dark about even basic details about why characters matter is not how you do good suspense, Heroes Reborn! You can’t just say that characters are important, and have a great destiny, and expect audiences to accept that at face value. Show, don’t tell! At best, simply banging on about your characters’ supposed great destiny, and barely showing any evidence of why they’re so important, hurts the pacing of your show, and makes you go in circles. At worst, it’s downright insulting your audience, and treating them like they’re stupid!

Speaking of stupid, Carlos also continued to disappoint this week, and is still way too unlikable to really get behind. He goes to the police station to grill Detective Dearing about the location of his kidnapped father and nephew, and, shock of shocks, he can’t get to Dearing, because you can’t interrogate a dirty cop in the foyer of his own police station. Who knew. That said, in the mother of all plot convenience, some E.P.I.C. specs show up right at that exact point, and Dearing is identified as an Evo and arrested, right at that exact point. This gives Carlos an easy opportunity to don his El Vengador costume, and drag Dearing off for himself.

Speaking of the new metal-plated El Vengador outfit, it somehow gives Carlos super-strength for literally no reason, to the point where it creates physically impossible blood splatter when he punches out one of the cops, just in case you weren’t certain that this sequence is complete bullshit. How does that work?! Carlos clearly doesn’t have super-strength, as we established when he had his last run-in with the cops. Putting on a suit of armour doesn’t immediately give you super-strength! You are not Iron Man! This was an infuriating scene, and it just felt like the showrunners stopped caring about Carlos completely here, so they’re just doing whatever, and trying their best to ape other popular superhero characters, namely Iron Man and Batman, until Carlos is hopefully useful later. Also, of the innumerable reasons why Iron Man and Batman are better than Carlos, a big one is that Iron Man and Batman wouldn’t critically injure and possibly kill two innocent cops that are just doing their jobs. Seriously, screw Carlos!

Yet again however, the crowning achievement for a terrible storyline in Heroes Reborn goes to Luke Collins. Mercifully, we didn’t see Joanne with him this week, but that didn’t do much for improving Luke’s character. He revisits his old house, mopes around a lot, we learn that he’s a dentist, he sells his practice, then he burns down his house for… Reasons, and then walks away. Wow. That’s seriously it for his arc this week. What a waste of time. 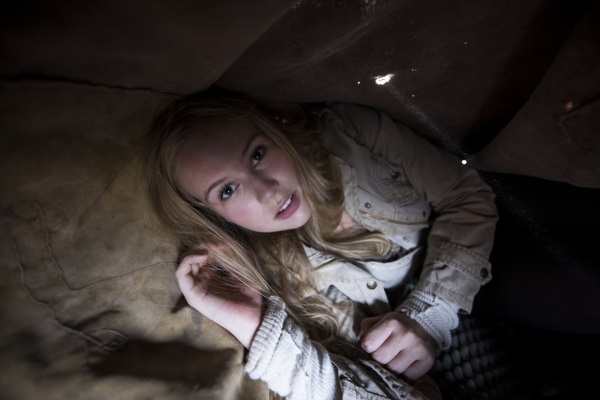 Despite some good story elements with Tommy and Noah, you can probably infer that Heroes Reborn proved to be very frustrating this week. The show got unforgivably lazy in some places, and felt like it just wasted time with several scenes. There’s still far too little context and meaning behind everything that’s going on, and this inevitably leads to a complete lack of audience investment. This miniseries really needs to do a better job of illustrating why things and people are important, without just force-feeding the audience a bunch of vague exposition that they’re supposed to simply accept, and trust that the miniseries will go somewhere with later.

Heroes Reborn, you don’t have the luxury of dragging your feet. Next week, you’d better get back to a sense of forward momentum!

Heroes Reborn Episode 5: "The Lion's Den" Review
Heroes Reborn frustratingly stumbled backwards this week, offering some good material for Tommy and Noah, but delivering lazy, tedious plots for just about everyone else, even as we finally get some answers about the coming disaster.
THE GOOD STUFF
THE NOT-SO-GOOD STUFF
2015-10-17
60%Overall Score
Reader Rating: (0 Votes)
0%