With two strong two-part stories elevating Series Nine of Doctor Who so far, “The Girl Who Died” began another appealing storyline, and one that actually puts to bed the mystery of why The Doctor has appeared in the guise of someone that he met previously, specifically as the Tenth Doctor in “The Fires of Pompeii.” We also get to meet the long-awaited character that Game of Thrones’ Maisie Williams is portraying! Sadly, as The BBC has claimed previously, she’s not The Doctor’s lost granddaughter, despite persistent rumours to that effect, nor is she a younger incarnation of Missy.

Instead, Williams plays Ashildr, a Viking girl who previously seems to have little significance. By the end of the episode however, the game changes with her, drastically, and this ties in to the revelation of why The Doctor currently bears the face of a man he encountered before, which hasn’t happened since the Sixth Doctor donned the face of his former executioner as the Fifth Doctor, back in Classic Who.

The episode begins with a separate scenario, whereupon Clara is out in space, being attacked by space spiders, while The Doctor trys to position the TARDIS so he can rescue her. After successfully doing so, the two then end up back on Earth, though are captured by Vikings, having ended up quite a few centuries in the past. The Vikings even break The Doctor’s Sonic Glasses! This might be a cathartic moment for longtime Doctor Who fans who were displeased at the Twelfth Doctor giving up the character’s trademark Sonic Screwdriver in favour of the Sonic Glasses at the start of this season, though don’t get too excited. Even when broken, the Sonic Glasses still function, and realistically, The Doctor will probably have conjured up a new pair by next week.

Anyway, The Doctor and Clara are taken far away from the TARDIS, and The Doctor tries to convince the Vikings that he is a human incarnation of the ultimate Norse god, Odin, employing a Fourth Doctor tactic of trying to convince a primitive culture (or companion) that a yo-yo is magic. As you do, when you’re a time-traveling alien Time Lord, I guess. This initially seems to work, until what appears to be the real Odin suddenly materializes in the sky, taking away the strongest villagers to Valhalla, which, naturally, is a spaceship.

Clara ends up sucked up with Ashildr, our big new Maisie Williams character, and the Vikings soon discover that they’re about to be vaporized. Clara and Ashildr make a rush for the far door, but fail to escape the vaporization beam… Only to end up in another room.

Turns out that, “Odin” is predictably a fake, and is actually an alien warlord, leading an alien race called the Mire. The Mire are considered among the most dangerous races in the galaxy, and the reason why Clara and Ashildr weren’t killed, is because they’re female. The Mire want to mash up the strongest male warriors so that they can drink their testosterone and empower themselves with it. That’s bizarre and gross, but it’s certainly not the worst thing that Doctor Who aliens have done to make themselves stronger. 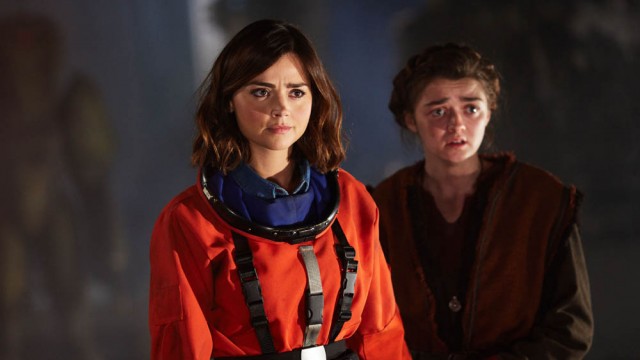 Anyway, Clara and Ashildr are beamed back down, after Ashildr tries to act defiant towards the Mire, goading the aliens into a duel with ten of their finest warriors for the next day. After Clara explains the situation to The Doctor, The Doctor at first claims that there’s no way for the other villagers to win, as they’re all weak, untrained farmers and fishermen. The Doctor then explains to Clara the danger of saving Earth when history doesn’t dictate it necessary. He says that nobody will miss a small village, and if he saves a handful of villagers from a powerful alien race, Earth will become a high-value strategic target, which could potentially doom future generations.

This does set up another interesting Doctor mystery, though it’s not long before Clara twists The Doctor’s arm into helping the villagers. What follows is a very funny sequence of how naturally ineffective it is to try and train ordinary villagers to be warriors in a day, even if they’re of Viking heritage. The Doctor decides to settle on giving them the noble death that all Vikings crave, though the cries of a baby soon tip him off to a great plan, one apparently involving electric eels!… Yes, really.

Why this remote fishing village has a full supply of electric eels for some undefined blacksmithing purpose, I don’t know. It’s a bit of a bizarre plan that feels like it was forced by the writers, under creative constraint. Regardless, The Doctor wires up a big apparatus, then has the townspeople simply acting merry as the Mire arrive. The Doctor asks the Mire if they would truly slaughter innocents, but the Mire don’t seem to be bothered that nobody is ready to fight them, and are ready to carry out their promise to massacre the village.

Unbeknowst to them however, The Doctor has rigged the eel apparatus to shock the aliens, and allow the villagers to escape. He then has Ashildr, using one of the Mire helmets, make one of her puppets appear as a gigantic serpent, which terrifies all but the false Odin into teleporting away in fear. The Doctor reveals that the video of the Mire’s cowardly retreat has been recorded on Clara’s phone, and it will be uploaded to the Galactic Hub, if they don’t leave the planet, and spare the village. Apparently, the Mire are not actually a capable warrior race. They’re cowards who somehow got a reputation as great warriors, and people merely believe the story, not having witnessed the truth of what the Mire actually are. 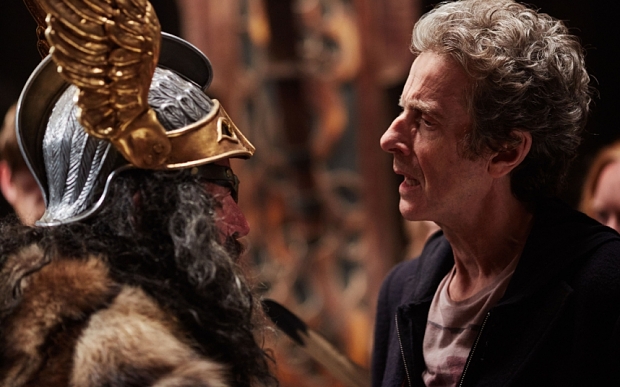 So, the plan is a success, the Mire retreat, and all seems well!… Until, The Doctor returns to Ashildr, and the village realizes that she has died, overwhelmed by the demands of using the Mire helmet. The Doctor apologizes profusely and runs off, with Clara following. The Doctor then laments that he’s tired of losing people, and that he can’t enjoy a victory when his plan claimed the life of an innocent person that was meant to be part of it. Despite Clara’s assurances, it seems that The Doctor is overcome with sorrow… Until, a flashback occurs, which has The Doctor recall meeting the man with his face back in, “The Fires of Pompeii.”

The Doctor realizes that the reason that he took the face of the man from Pompeii (essentially resolving the oddity of Peter Capaldi portraying a one-off guest character in that episode, long before he became the Twelfth Doctor), is to remind him that he chose to save that family, despite the assured destruction of Pompeii that he couldn’t alter. He is inspired by this revelation, realizing that he bears the face of the man from Pompeii because he is The Doctor, and it is meant to remind him that he is not a slave to history, and that he saves people. That is who he is. It’s a very cool moment, especially if you’ve been watching New Who long enough to have seen and be able to recall, “The Fires of Pompeii.”

The Doctor rushes back and uses a re-wired medical chip from the Mire to restore Ashildr to life, leaving a second chip for when she realizes what’s been done to her. As The Doctor and Clara return to the TARDIS, The Doctor explains that the chip will never stop healing Ashildr, essentially making her immortal. The second chip is for when she encounters someone that she can’t bear to lose. He then says that whether or not this is a good decision will be revealed in time. “Time will tell, it always does.” Nice nod to the Seventh Doctor from Classic Who there, who said the same thing when he believed that he’d destroyed Davros and Skaro for good. The episode then ends with a rotating shot of Ashildr, as the times appear to change, with Ashildr never changing, though a series of flaming explosions erupt at the end of the shot, with Ashildr appearing to crack a twisted smile, potentially suggesting that The Doctor may have created a powerful new enemy, especially with the ominous “To Be Continued…” following it.

“The Girl Who Died” is a two-parter, but unlike the previous two-parters that comprise Series Nine so far, it didn’t feel as much like a direct two-part story. Instead, it had a clear beginning, middle and end, and merely foreshadows what could be a drastic shift for Ashildr’s character next week. Even so, this was another great episode for Doctor Who this season, even if The Doctor’s plan didn’t achieve quite as organic a result compared to the previous two-parters this season. Still, Maisie Williams has proven to be an awesome new addition to the show, and hopefully she only gets better when we see the true gravity of The Doctor’s controversial choice next week!

Doctor Who 9.5: "The Girl Who Died" Review
Doctor Who finally delivered the long-awaited guest turn of Maisie Williams this week, presenting a strong story where the Twelfth Doctor was reminded of his best self, even if this led to some possibly massive ramifications in the future.
THE GOOD STUFF
THE NOT-SO-GOOD STUFF
2015-10-18
85%Overall Score
Reader Rating: (0 Votes)
0%