Brooklyn Nine-Nine hit a new high note for Season Three this week with “The Oolong Slayer”, which had some of the season’s best jokes yet throughout every plot, and led to a very satisfying resolution that finally saw order returned to the precinct.

The episode begins with The Vulture predictably being an enormous jerk to everyone, and doing all manner of things that no sensible captain in no real-world police precinct would be able to do without being fired mere hours later. This culminates with The Vulture forcing everyone to hand over their high-profile felony cases to his former Major Crimes department without debate, even forcing the precinct to recite a new, demeaning slogan, “We only solve misdemeanours, wieners.” Yep, The Vulture is still The Vulture, and his flagrant disrespect for both the Nine-Nine and police procedure overall is still reaching spectacular new heights. 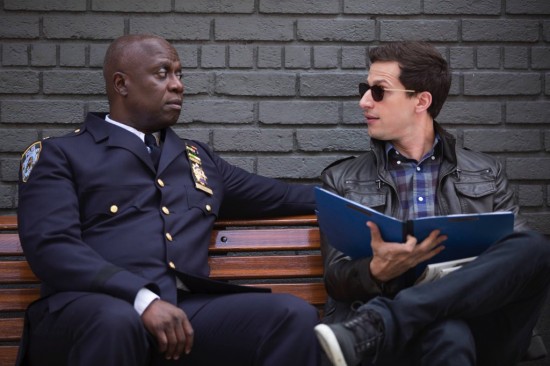 Naturally, Peralta decides to defy orders, hanging on to a seemingly open-and-shut botched burglary case that he believes is actually the work of serial killer, the Oolong Slayer, who has evaded capture for many years, even against entire task forces and the Chief of Detectives. Peralta then sneaks the file to the PR department, meeting with Captain Holt in the mens’ room to get his help on the case. This results in a very uplifting alliance between the two natural rivals. It gets downright hilarious soon after, when it’s revealed that Gina eavesdropped on the entire conversation, and is thus roped into solving the case as well. Apparently, Gina hangs out in the mens’ room of the PR department because the acoustics are amazing. Are you really surprised? Me neither.

Back at the precinct, we also get two strong subplots from the remaining leads, both of which are great in both concept and execution. The first subplot involves Boyle introducing Jeffords to a tasty treat from South America, which he claims is nutritious and easy to snack on. Since Jeffords is starting to heavily stress-eat however, he ends up putting on a bunch of weight, giving us our first extended look at “Terry Titties”, as he was formerly called, that the series has offered outside of flashback.

While this storyline is pretty exaggerated, it was still very funny, especially when Jeffords is routinely in denial about how much weight he’s gaining. Boyle, being Boyle, also has to try and tip him off, without upsetting a man that could probably snap him in half and not break a sweat. It results in a lot of great jokes, and it has a pretty sweet-natured resolution too, with the precinct banding together to offer babysitting time for Jeffords’ coming third child, and Boyle offering to cook for the Jeffords family once a week. Aww… 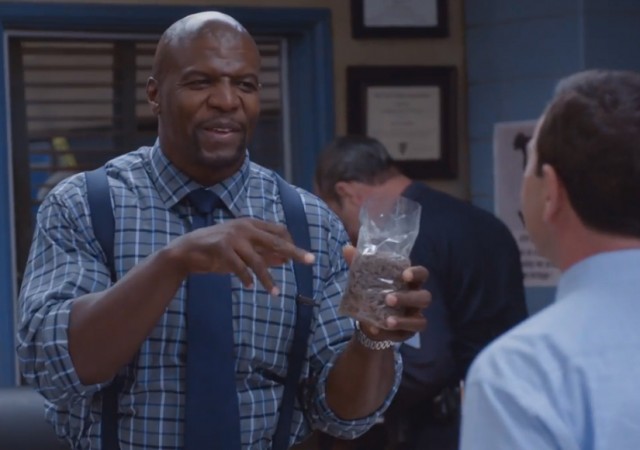 Some of the biggest laughs of the week definitely came from the Santiago/Diaz subplot however, with The Vulture demanding that the two women plan him a birthday party, because they’re women, and women love to plan parties. Did I mention that The Vulture is still The Vulture? Anyway, Santiago has a hard time defying her captain’s orders, even under circumstances that ludicrous, while Diaz decides that this is a golden opportunity to humiliate The Vulture, and get back at him for being such a jerk.

Naturally, The Vulture rejects both of their party ideas, though Santiago’s desperation in trying to locate The Vulture’s friends soon turns up a promising lead, which Diaz points out. Apparently, The Vulture is in a crappy band, and the two hatch an ingenious plot to have The Vulture hire his own band to play at his own party. This was also a very satisfying turnout that finally saw The Vulture taken down a few pegs, even if he didn’t realize it, wisely not stepping on what makes the character so darkly amusing on this series.

The bulk of the episode dealt with the investigation between Peralta, Holt and Gina however, with the two inevitably causing trouble for the department, and ending up reprimanded and suspended by both The Vulture and Wuntch. Holt once again sinks into a depression and resigns himself to his fate of being stuck in the PR department forever, though Peralta refuses to give up the case, even under suspension. Naturally, it’s not long before he puts together the pattern, and corners the killer, with Holt saving Peralta from eating a bullet.

This was an immensely satisfying result, particularly when Holt claims that Peralta should take all of the credit, since Holt understands that anything he does will end up being used against him by Wuntch, even if it’s an apparent victory. Season Two already demonstrated that at length, especially with episodes like “The Chopper.” Peralta still refuses to give up however, and goes to the Chief of Detectives to offer him the chance to take sole credit for apprehending the Oolong Slayer, so long as he removes The Vulture from the Nine-Nine, and reinstates Holt as captain.

Yes, after just a few episodes, Holt is already back as captain of the Nine-Nine, but I must say that the show restored the status quo in a clever, satisfying way, one that really showed how Peralta and Holt are just as amusing and loyal as allies as they are as rivals. The episode even ended with a hilarious gag for Gina, as everyone asks when Gina is coming back, before Holt says that she wished to make a bigger entrance than just coming back on the elevator. Gina’s desk then erupts in confetti, before Gina is shown sitting there, and says, “Or was I ever gone?” No, Gina, no you weren’t. Once again, I hope you never change! 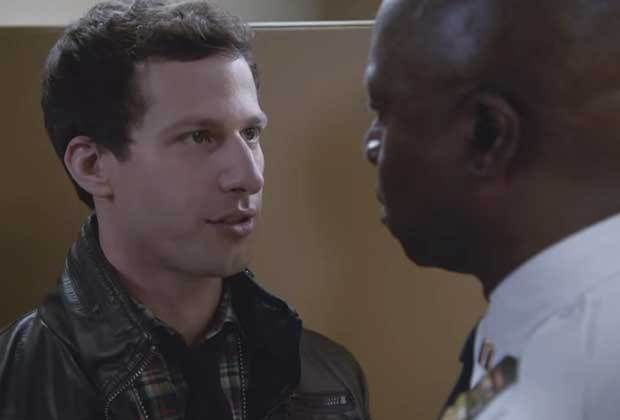 It would have been easy (and probably likely) for Brooklyn Nine-Nine to simply get bored with the character shift, and restore the status quo as soon as the series got tired of putting Holt and Gina somewhere else, and having The Vulture be captain of the Nine-Nine, but fortunately, that’s not how it went down. “The Oolong Slayer” was an especially superb episode that resolved the Holt/Gina separation from the precinct in a funny, standout way. The episode was packed with great laughs all around to boot, with each character having a clever, rewarding resolution to their story arcs this week.

Best of all? Holt’s return comes just in time for the traditional Halloween episode next week! Looks like we’re all ready for Peralta’s and Holt’s tiebreaker as to who truly is the greatest detective/genius of the precinct!

Brooklyn Nine-Nine 3.4: "The Oolong Slayer" Review
Brooklyn Nine-Nine hit a new high point for Season Three this week, with each character getting a clever, hilarious and satisfying story arc, along with Holt and Gina finally making their proper return to the precinct!
THE GOOD STUFF
2015-10-19
95%Overall Score
Reader Rating: (0 Votes)
0%