The Walking Dead got violent this week. Very violent! In fact, after the mostly collaborative, can-do spirit of the season premiere, barring some of that questioning Rick’s authority that predictably didn’t last, “JSS” served as something of a shock back to reality in the harsh, uncompromising world of this series. The episode mostly unfolded as a real-time incident that saw the proper introduction of this season’s new villains, the Wolves, but the tense collection of sequences that seemed to spell the beginning of the end for Alexandria still made for a visceral, thoroughly compelling episode overall!

The episode begins quite peacefully, with Carol cooking with her friends, and the crew acting like the worst thing they have to worry about is one of the women smoking. Carl also quietly pushes Judith in her stroller, and offers to teach Gabriel how to better defend himself. It all seems quite like any other ordinary day in Alexandria, until Carol sees the smoking woman puffing a drag outside, with a look of disapproval. 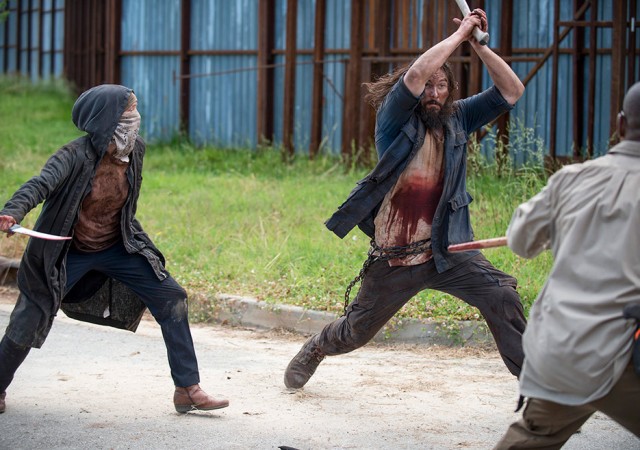 Then, the woman gets brutally hacked up by a psycho with a machete! Oh boy! Cue the Wolves, who start to invade Alexandria, butchering whatever citizens they come across with their machetes. Clearly, the community shouldn’t have procrastinated on Rick’s, “Everybody should carry guns” order! Luckily, Morgan shows up, after splitting off from the group early in the season premiere, as they lead the Walker horde away from Alexandria, which is where they still are at this point. Yep, we don’t see Rick, Daryl, Glenn and several other principal characters at all this week, but this was to the show’s benefit, especially when it reinforced the idea of how helpless Alexandria actually is without Rick’s leadership. Yes, I know that I said that this show needs to cool it with treating Rick like a messiah in my review of last week’s season premiere, but that doesn’t mean he’s wrong!

Anyway, as the Wolves start slaughtering the unarmed citizens of the community, the capable defenders begin to fight back. Carol gets right to work donning a Wolves disguise, and absolutely massacring the baddies. Carol easily owned this episode, whether it was between her harsh nature in dealing with Jessie’s children, after the death of their father in the Season Five finale, or between the fact that she was a one-woman army during the invasion of the Wolves. Carol even helps several other citizens defend themselves, even though she doesn’t try to save people that she feels she obviously can’t.

This led to an interesting contrast with Morgan, who stood in stark contrast to Carol’s kill-or-be-killed disposition. Morgan adamantly refused to kill even villains as vile and vicious as the Wolves, simply using his staff to demand that the killers leave, and never return to the community. He even manages to scare some of them off successfully, even if Carol kills some of the bad guys for him. Yes, Morgan’s non-violent stance feels a bit unrealistic, but hey, maybe that’s the point. He even does appear to bend this right at the end of the episode, when one of the Wolves lingers behind, and Morgan is seemingly given no choice but to finish the guy off, since there’s obviously no getting him to leave, and no reasoning with him. The very end scene afterward, which had Morgan and Carol crossing by each other, reaching a sort of tense understanding, was also a great way to conclude the episode, after so much senseless death and loss. 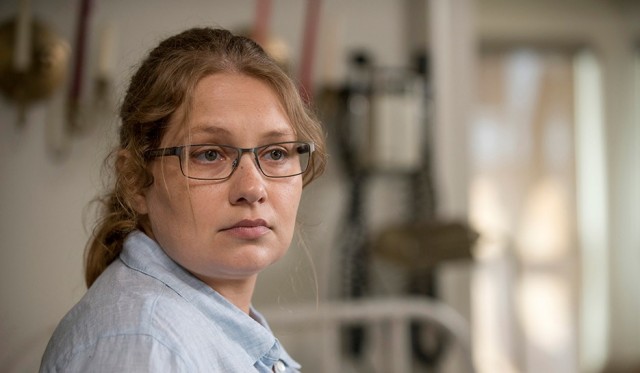 Carl was also a big standout this week, defending Enid and Judith, though Ron refused to shack up with his garrison. Ron’s an idiot for that, but he is an angsty teenager who just lost his father, so maybe this is forgivable to a point. Nonetheless, Carl’s hesitation almost gets everyone killed when one of the Wolves begs for mercy, after Carl gets him in the leg, and the guy manages to grip the barrel of Carl’s gun, but the moment is mostly moot, since Carl just shoots him dead a few seconds afterward. Still, it was a tense hiccup that reminded Carl not to hesitate!

Another powerful moment came from Jessie, who successfully hid her remaining son, and was almost taken out by a woman fighting for the Wolves. After a brutal struggle, Jessie takes some scissors as the woman goes for Jessie’s gun, and brutally stabs the shit out of her attacker for almost a whole minute, right as Ron returns home! Jesus, Jessie! I think you got her! Still, it was a highlight moment in an episode that was full of highlight moments, showing that even a sweet-natured person like Jessie will unleash a dark side when she’s pushed.

Outside of the wanton bloodshed, Tara and Eugene attempted to assist Denise, the new doctor for the community, who is actually a failed surgeon that became a psychiatrist, and has been forced to take Pete’s place as Alexandria’s resident healer. Denise has to be talked through saving a patient, who predictably dies anyway, and that’s about it for this arc. Honestly, considering everything that was going on outside, this arc felt like it just ate up time, and had to account for Eugene and Tara being the two characters of Rick’s group that aren’t in fighting shape at present, if you don’t count baby Judith, or Gabriel, who still annoyingly escapes certain death for no reason. 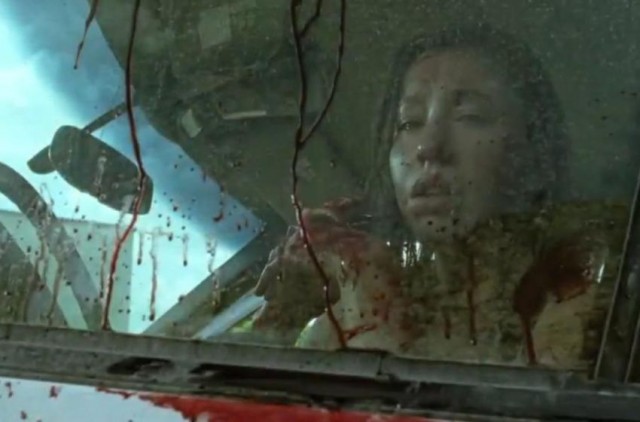 Another slight gripe about this episode is that last week’s cliffhanger, with the legion of Walkers all shambling towards Alexandria after a horn begins to blare from it (which turns out to be a Walker depressed on a truck that crashed into the village walls), ended up not going anywhere in this episode. Maybe it will come into play next week, and force an evacuation from Alexandria, but for now, it felt like a surprising oversight in what was otherwise a pretty superb episode. Moreover, how the hell did a Walker even get stuck on a truck and fall on the horn to begin with? Honestly, that did feel a tad contrived, even when the rest of the episode was put together very well.

After the invaders are finally driven out or killed, evidence is found that one of the Alexandrian citizens sold out the community to the Wolves, feeding them intel on the defenses and layout by photo evidence. The likely suspect is Enid, since the episode began with a prologue showing Enid’s brutal journey to survive before reaching Alexandria (including consuming raw tortoise meat, which you’d think would be a terrible idea, given that this world has a serious infection problem), and ended with Enid slipping away while Carl is distracted. Still, maybe someone else is the guilty party, and Enid is a red herring. We’ll have to see. 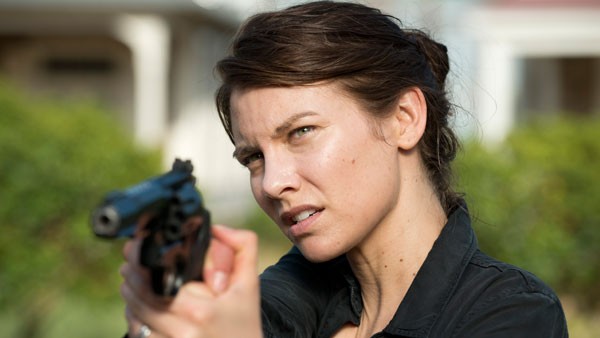 Regardless though, “JSS” was another awesome episode of The Walking Dead, and one that actually does a perspective shift correctly, proving that the showrunners are starting to fix some of the obvious problems with the front half of Season Five. Much like the also-great “No Sanctuary” from last season, “JSS” more or less simply unfolded as an extended and highly violent attack sequence, but it was one well-earned, and it used the extreme violence to great effect, both thematically, and to generate excitement and high stakes. The Wolves have been well-established as dangerous new foes, even if they don’t seem to have guns at this point (unless you count one of them snatching a pistol as Morgan chased his squad out), and the episode even got by nicely without needing big characters like Rick or Daryl at all, and that’s another plus.

With that Walker horde still presumably shambling towards Alexandria, it looks like the community’s situation is going to get worse before it gets better too. Hopefully, that keeps up Season Six’s healthy momentum.

The Walking Dead 6.2: "JSS" Review
The Walking Dead continued to raise the stakes with a highly visceral and violent attack by the Wolves this week, which saw numerous Alexandrian citizens slaughtered, and reminded us that Carol is still a force to be reckoned with!
THE GOOD STUFF
THE NOT-SO-GOOD STUFF
2015-10-19
88%Overall Score
Reader Rating: (0 Votes)
0%