I was quite happy to see everyone reunited after last week’s episode of The Last Man on Earth. Despite some feeling that the show can be carried by Phil and Carol alone, the reality is, that would probably only work in the short-term. There’s only so much Phil/Carol shenanigans to be taken by themselves before the show inevitably begins to repeat itself, and exhaust a one-note joke. Frankly, you need more characters than those two, even if Season Two undeniably did get off to a fantastic start without the rest of the supporting cast in its first two episodes.

Unfortunately though, “C to the T” did justify some of the apprehension towards having everyone back together again, as Phil receives his punishment for that hilarious gun-wielding apology scene from last week. As much as punishing Phil is justified, particularly after some of his actions in Season One, the episode ended up straining the joke, unfortunately, and, rather than make Phil too unlikable, as some episodes of Season One were guilty of doing, this time, the episode makes the rest of the cast too unlikable. As much as Phil’s torment did lead to some decent laughs here and there, frankly, the group’s treatment of him was excessively cruel, and made them come off as petty and sadistic, more so than seeking amusing reprisal.

So, we pick up where last week’s episode left off, with Phil in a stockade. Carol appeals to the group to find a different punishment, since having Phil in a stockade is too cruel, so they instead opt to lock him in the rec room for a week. Phil even volunteers to make it just over a month, since he’s that desperate to prove to the group that he really has changed since last season.

The rest of the episode then simply serves as a sequence of increasingly ludicrous crimes and punishments for Phil, which does have some laughs, but it frankly leads to a weak link in what’s otherwise been a strong season so far. The entire episode was anchored around a joke that got old kind of quickly, especially when Phil’s punishments start escaping the realm of reason pretty fast. The first upgrade is funny at least, after Phil sneaks out to steal some cheese (why exactly is he allowed to open his own locked door?), and stupidly runs into some wind chimes after an otherwise flawless attempt, right as Melissa happens to be reading a book nearby.

This leads to Phil getting a shock collar put on him, and here’s where the joke starts to become uneven in execution. Phil tries to pay people exaggerated compliments and good cheer, though this leads to the group putting another collar on him that sprays irritating mist into his face every time he speaks above a whisper. So, he deserves to be tortured just for annoying people? That feels like a bit much, especially after Carol spends so much time vouching for him, and Phil clearly meant every word he said during his otherwise tactless apology attempt. Sure, The Last Man on Earth often has a knack for dark comedy, but here, it just sort of feels more cruel than funny.

There’s even one scene where Melissa brings Phil a bucket of beer, but places it a foot or so away from where Phil can step, without getting shocked, as a further means to torture him. As much as some of Phil’s attempts to retrieve the beer were funny, again, it feels out-of-character for Melissa to be so petty. Similarly, what the hell happened to her sweetheart, Todd in the interim?! The episode kind of hints that Todd is up to something shady, and that changed him from being an oblivious nice guy to suddenly being cold and nasty. For now though, Todd also seems like he’s undergone too drastic a shift from Season One. He didn’t just gain a new dimension. He did a total one-eighty! What’s up with that?

Of course, Phil eventually gets to prove his desire to redeem himself after a fire breaks out, and he’s unable to call for his sleeping companions because of the second collar. Maybe that’s all the more reason why you shouldn’t have gone so far as to take away his ability to speak, you idiots! Fortunately, after an admittedly funny sequence of Phil constantly getting shocked as he runs outside the prison zone to extinguish the fire, the group sees that he really has changed, and they remove the collars, though they don’t go so far as to forgive him yet. 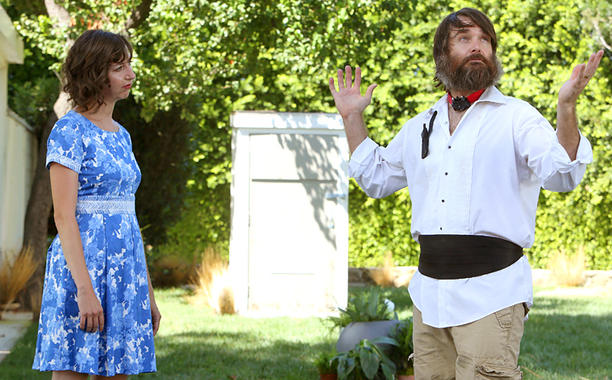 “C to the T” made an honest effort to make light of Phil’s uphill climb to redemption, but the problematic storyline got in the way of the episode, and some of the jokes felt way too mean-spirited. The episode wasn’t unfunny by any means, but it did strain the joke, and that led to a bit of a stumble for The Last Man on Earth this week. Hopefully, everyone starts to get over Phil’s former behaviour soon, or else some of the fans will be justified for wanting the supporting cast gone again.

The Last Man on Earth 2.4: "C to the T" Review
The Last Man on Earth was funny enough this week, though the episode's problematic storyline dragged down the humour, taking the joke of Phil's long overdue punishments, and arguably pushing it to the point where it just becomes mean-spirited.
THE GOOD STUFF
THE NOT-SO-GOOD STUFF
2015-10-19
73%Overall Score
Reader Rating: (0 Votes)
0%