After a strong start to Season Two last week, iZombie stumbled a bit, just a bit, with “Zombie Bro”, an episode that had Liv consuming the brain of a fallen frat boy king. Remember “Virtual Reality Bites” from last season? Remember how the humour behind that episode was a lot of stereotyping, in that case for gamers? Well, you can look forward to more of that in this week’s episode, only this time, for frat boys.

It wasn’t just the humour that felt a little hit-or-miss this week though. It was also the overarching case-of-the-week, which wasn’t bad, but wasn’t great either. The ending to the case felt pretty unsatisfying, and the episode as a whole largely existed simply to crowbar in another dramatic development with Major, and string together a bunch of goofy jokes around Liv’s latest brain food.

Props to Rose McIver though, because she somehow manages to sell even the more awkward jokes, without turning Liv into a full-blown, transparent caricature. This is thanks to a few well-placed emotional moments with Major as well, but boy, McIver continues to demonstrate tons of talent as Liv, who is constantly switching personalities every week. Even Babineaux finally acknowledges Liv’s inconsistent temperament with every case, saying the hilarious line, “You’re like a box of chocolates. I never know what I’m going to get with you!” to Liv after her latest embarrassing brain-fueled actions. Being a skilled detective, it’s kind of astounding that Babineaux hasn’t speculated that Liv is possibly channeling murder victims in some way, since she always seems to adopt the personality of the dead person that they’re investigating, but hey, it’s still funny to see Babineaux so oblivious, so who cares.

Still, it felt like the writers were straining for jokes this week. Normally, iZombie has a good balance between goofiness and emotional insight, but this week, it was pure goofiness. Sure, some of the jokes were still very funny, but they do also paint all frat boys with the same brush in some respects, and it’s not a particularly flattering, or even accurate brush. Even the other frat boys that Liv interacts with all come off as bro-obsessed blockheads, as if they’ve all been taking lessons from Van Wilder. Surely, this can’t be true of every last man in a fraternity!

Fortunately, Major salvaged things a bit, before the episode went fully off the deep end, with Ravi convincing Major to come along for some, “Field research” on Utopium, which merely consists of Ravi trying to score drugs at a night club. At first, Ravi simply stumbles around idiotically, raving like a goofball, though Major soon after takes the drug too, and the two have a great time, until Liv is called to fetch Major, who is puking in the bathroom, and was found by a bouncer. All in all though, this was definitely one of the episode’s best sequences, the night club trip with Ravi and Major. After some more silly taxi escapades with all three characters dealing with a bad high (which actually was pretty amusing), Liv gets a nice emotional moment with Major, and starts to want to push against the two of them drifting apart. 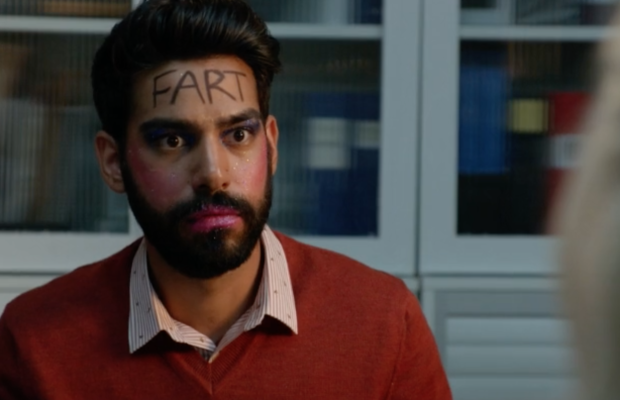 This actually leads into a strong ending portion for the episode, where Liv goes to visit Major, who won’t come out of his room. After Liv simply walks away, upon Major saying he’s busy, we then see that Major has become addicted to Utopium, using it as a means to null the pain and anguish he’s feeling over murdering people for Max Rager. This was actually a big punch to the gut, after an otherwise over-the-top silly episode, and Major’s new drug addiction actually did a great job of bringing the show back down to Earth, especially when it illustrated some unintentional damage done by Ravi in his effort to re-forge a zombie cure.

Shortly beforehand, Liv does manage to solve the case, after some dunderheaded red herrings that predictably eat up time, though the end result felt a bit contrived. Apparently, the costumed person who stabbed the frat boy to death was someone that the victim had killed in a drunk driving accident when he was 15, and the guy wanted revenge for it… Except, the murderer killed the wrong person, because someone else at the same university has the same name as the victim, who was another witness that was questioned previously, and indicated a history with drunk driving. Where did this guy get the impossible costume that Liv and Babineaux couldn’t find? Well, apparently, the guy had it because his girlfriend is a furry with very specific sexual demands. Yes, seriously. iZombie went there!

Regardless, this case resolution once again felt pulled out of the ether, and it’s easy to get the sense that some of the early cases in Season Two are becoming an afterthought for the writers, since there’s currently more of a focus on the character development. That’s fine to a point, but I hope that next week starts re-achieving the balance between great whodunits, and great character work.

Finally, Blaine continued his mysterious operation this week, and we see that his immense power over the zombie community hasn’t changed a bit. Blaine has the district attorney in his pocket, and uses him to go after a former crime boss (aptly named ‘Mr. Boss’) that’s in his way, despite Seattle coming to accept the guy being there, and afterward, Blaine goes to see his very wealthy father, played in a guest role by CW regular, Robert Knepper, who he also turned into a zombie. This explains how Blaine achieved some of his resources and capital in Season One, since his father has been paying him big sums of money for a fresh brain supply on the regular, as with the D.A. Blaine nonetheless vows to take down his father and seize his company however, after we get a glimpse at Blaine’s deadbeat, pre-zombie origins, and that’s where this arc ends for now.

iZombie buckled a bit under its normally outstandingly refined balance of effective fun and mysteries this week, but “Zombie Bro” still kept the series’ quality standing above the bulk of the current television season. It veered too far into easy stereotypes, and the case-of-the-week didn’t feel like a particular winner, but enough strong character moments and effective humour kept the series at least maintaining its high entertainment value.