Arrow’s fourth season continues to move along pretty comfortably in “Restoration”, which had the neat idea of throwing together the original Team Arrow, namely Oliver, Diggle and Felicity, while Thea and Laurel take a trip to Nanda Parbat to try and resurrect the long dead Sara. Overall, the episode was good, sporting another decent turn for a more obscure DC villain, and continuing to establish the imposing menace of Damien Darhk as the current season’s new big bad.

A big focus in this episode was Oliver and Diggle having to try and put aside their differences so they can keep working together, with Felicity forced to try and coach them through field work. The two try to hunt for more leads surrounding the Ghosts, but it naturally doesn’t go well. In response, the two decide to go it alone and do things their own way, against Felicity’s wishes, which leads to both of them nearly getting killed. Felicity then orders the two men to stay in the new Arrow Cave until they work out their differences and learn to be partners again. 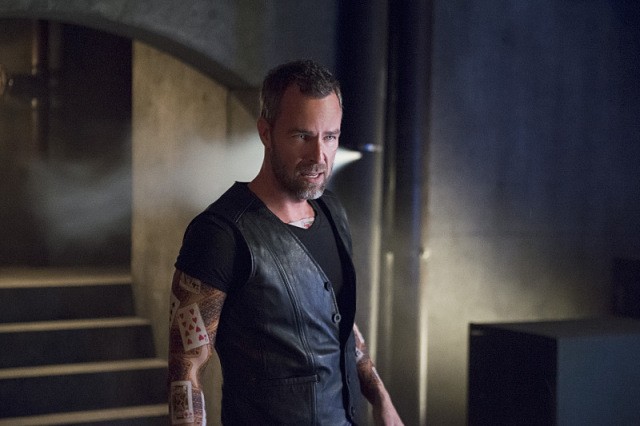 This was one of the high points of the episode for sure, since Diggle finally stopped being such a hard-ass, and he and Oliver finally hashed things out. Felicity is right when she says that the stubbornness of both Diggle and Oliver nearly cost them their lives, and it was the wake-up call that they both needed to start being smarter, and going back to the old way of trusting each other. Diggle decides to give Oliver a chance to earn his trust back by agreeing to take him along on following a new lead in his brother’s assassination. He also finally reveals to Oliver that he learned from Deadshot all the way back in Season Two that H.I.V.E. ordered his brother’s murder. It’s about time!

Meanwhile, Damien Darhk is once again getting annoyed at Star City’s resident Emerald Archer, and decides to step things up by hiring an extra dangerous baddie to go after them. After making an example of the poor fool that gave Oliver and Diggle the slip, and was somehow stupid enough to walk right back up to his boss afterward (that has to be a Darwin Award right there), Darhk sends a runaway metahuman from Central City, Jeremy Tell, a.k.a. DC villain, Double Down, to kill the Green Arrow for him. For those unaware, Double Down has the ability to generate an infinite supply of lethal playing cards from his body that he can throw and direct at very high speeds with his mind. In the comics, this came from a cursed deck of playing cards that permanently bonded to his skin, though that may have been a bit hard to swallow for even the DC Television Universe, so this time, he was merely getting a playing card tattoo when the dark matter wave hit and mutated a bunch of people during the events of The Flash.

In any case, Double Down is a neat new baddie that lends himself to several very cool action scenes. The best of these came when he targeted Felicity in the Palmer Technologies building, shortly after Felicity tries to secretly give one of the cards recovered from Double Down to Curtis so that she can study it and locate him. Guess that sort of backfired. We did get a very teasing early look at the T-Spheres however, which are a staple of Curtis’ future superhero identity, Mister Terrific, though he naturally prevented Felicity from really interacting with them at this point. 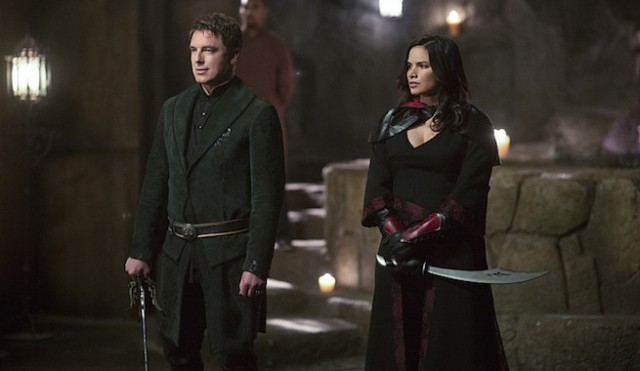 Anyway, Felicity has no choice but to try and get Curtis to safety by hiding in the Arrow Cave, confessing that she works with Green Arrow, though fortunately, doesn’t divulge Green Arrow’s secret identity as Oliver Queen. Curtis is knocked out during the chaos, and eventually taken to the hospital, but man, it was awesome to see Felicity be such a badass this week! Considering that Oliver, Diggle, Laurel and Thea are doing all of the fighting at this point, Felicity rarely gets a chance to directly participate in the action, but this episode remedied that very nicely, proving that Felicity can hold her own, even against a deadly metahuman!

Oliver and Diggle are sadly too late to trace the lead, the woman who ordered the hit on Diggle’s brother, as Darhk kills her with a deadly display of his magic capabilities, leaving her body for the heroes to find and lament at. This does however lead to Oliver and Diggle finally realizing that they need each other, and what follows is an awesome team-up between the two that leads to them stopping and apprehending Double Down as he’s fleeing the city, finally having forgiven each other, and going back to being a crime-stopping super-team. Aww, yeah!

As the episode’s main plot winds down, Double Down is shipped off to Iron Heights Prison (really? He doesn’t go in the metahuman prison at S.T.A.R. Labs?), and Felicity starts getting mysterious hack-like texts on her phone. The obvious speculation is that Ray is trying to get ahold of her from his microscopic state, further laying some more groundwork for Legends of Tomorrow next year, which The Flash also did this week with the whole prodding at Captain Cold’s potential to be a hero. Will the truth come out that Ray is alive on Arrow though? If it does, how does that affect Felicity being company CEO to boot? 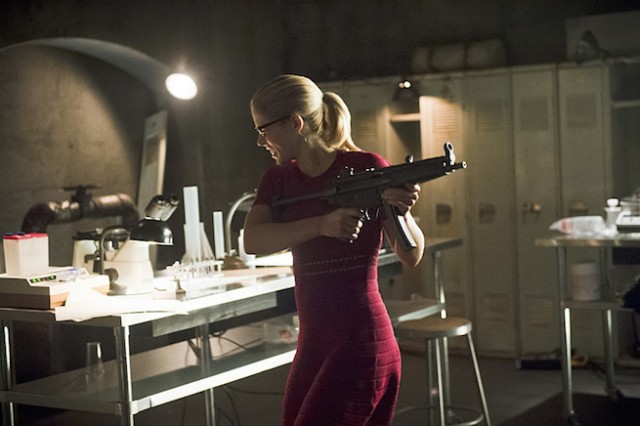 Regardless, as much as events in Star City were quite busy, events in Nanda Parbat were also pretty dramatic. Thea and Laurel bring Sara’s body to Malcolm Merlyn, making this the first time we’ve seen him this season, as the new Ra’s Al Ghul. Surprisingly, Merlyn and Nyssa both refuse to dunk Sara in the Lazarus Pit, claiming that the Pit can’t be used to revive a fully dead person, or at least has never been used that way before. Even if it could, Sara would become as monstrous as Thea, and neither Merlyn nor Nyssa see the point of that risk.

Speaking of Thea, Merlyn explained a bit more about what the Lazarus Pit did to her, after helpfully sending some of his lackies to kill her, of course. Father of the year, as usual. Apparently, the Lazarus Pit restores life, but it demands life for life, which explains Thea’s bloodlust and constant urge to kill, as it’s necessary to restore universal balance, after Thea took life from death, and thus, must pay back death in kind. It was actually a good explanation that improved the quality of Thea’s arc significantly, and it will help make her character more than just a violent loose cannon for Oliver to try and reign in. 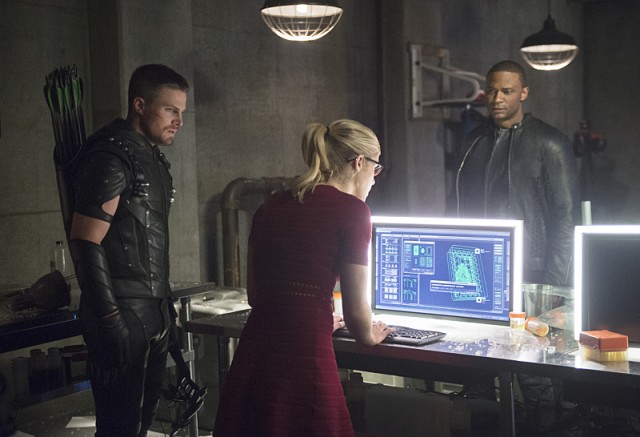 Less sympathetic this week however was Laurel, who just came off as selfish in her urge to revive Sara. It’s understandable that Laurel would want to use the Pit to bring her sister back, mind you, even if it’s a bit confusing that the idea never crossed her mind in Season Three, when Team Arrow visited Nanda Parbat several times. Still, Laurel wanting to upset the natural order of life and death didn’t come from a good place. It just made her come off as weak and frail, and still firmly in Sara’s shadow. The whole point of having Laurel realize her DC Comics identity as Black Canary was to take away that weakness. Sadly, Arrow kind of backpedaled with her, and making matters worse is that Laurel just gets her way in the most contrived fashion, with Sara simply being revived without complication, making the whole worry about reviving a dead person in the Lazarus Pit completely moot! Nonetheless, Nyssa destroys the Pit, and a feral Sara is chained up, which serves as the final scene of the episode, as Merlyn says that Sara’s death may be on him, but her butchered revival is on Laurel. Harsh, but true.

As for the flashbacks, they were alright, but nothing special. Oliver uses his torture techniques to try and expose someone hoarding drugs, and after a woman speaks up about the hoarding, Oliver is sent off to kill her. Naturally, Oliver tricks his escort into stepping on a land mine, and sets the woman free, demanding that she trust him. That was about it this week. Like I said, not much happened in the flashbacks this week, even if the return to Lian Yu is still proving superior than the rather shaky Hong Kong flashback arc from last season. 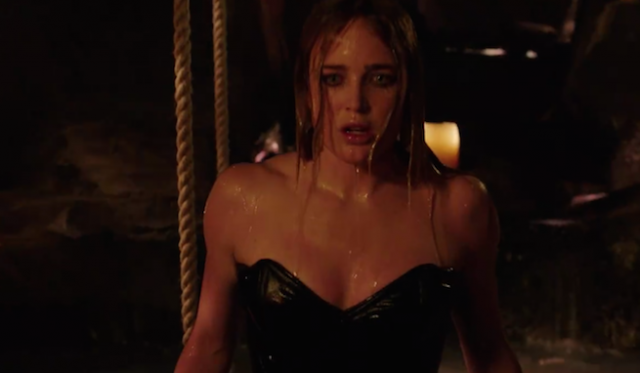 All in all, Arrow continues to impress with “Restoration”, even if only half of the Nanda Parbat storyline felt all that successful. Yet more teases were laid for Legends of Tomorrow, between Ray appearing to contact Felicity on her phone, and Sara getting a surprisingly simple revival in the Lazarus Pit, but the episode still stood nicely on its own merits, finally ending the Oliver/Diggle feud, and even delivering a pretty nifty villain-of-the-week while it was at it!

Arrow 4.3: "Restoration" Review
Arrow continued to satisfy this week, with Oliver and Diggle finally burying the hatchet, Felicity getting a great chance to prove herself in combat, and Sara coming back to life, as we also learn the true cost of cheating death with the Lazarus Pit.
THE GOOD STUFF
THE NOT-SO-GOOD STUFF
2015-10-22
84%Overall Score
Reader Rating: (0 Votes)
0%