After the showrunners outlined several Batman antagonists that are planned to make an appearance during the currently-airing second season of Gotham, the show has now cast one of those promised baddies at last. Nathan Darrow has been cast as cryogenic scientist, Dr. Victor Fries, whom Batman fans will no doubt know eventually becomes future Gotham City menace, Mr. Freeze. 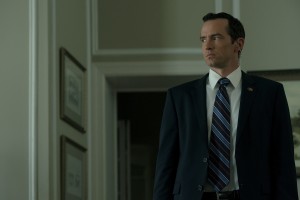 Darrow is best known for his role as bodyguard, Edward Meechum on pioneering Netflix Original Series, House of Cards. His take on Fries is said to be a brilliant cryogenic researcher that nonetheless struggles to connect with other people. The only exception is his wife, Nora Fries, who has yet to be cast. After Nora comes down with fictional (and fatal) DC Universe disease, MacGregor’s Syndrome however, Dr. Fries becomes obsessed with finding a way to freeze her body so that he can stop the spread of the affliction, paving the way for his eventual transformation into Mr. Freeze for when Batman prowls the streets of Gotham City.

Gotham’s showrunners have confirmed that Darrow’s Victor Fries will appear during the eleventh episode of the second season, set to air on November 30th. He will then re-appear in the twelfth episode. Apparently, there are big plans for Mr. Freeze around the time of the season’s midseason climax, and he will be a pivotal villain during that time.

Gotham airs Mondays at 8:00 P.M. EST, on CTV for us Canadians, and FOX for our American neighbours.

Keep sliding to Eggplante for all major news, updates and our weekly review coverage on Gotham.