Tekken 7 is currently holding an unfinished beta release in Japanese arcades, though beyond the promise that the anticipated fighter would eventually come to home consoles, little else has been said about it. At Paris Games Week 2015 however, Bandai Namco took the stage at Sony’s press briefing, and confirmed that Tekken 7 will make its home on the PlayStation 4 primarily, even if an Xbox One port is also set to be made. 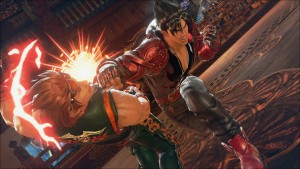 Tekken 7 will have exclusive content and bonuses on PlayStation 4, as confirmed by the series’ lead producer, Katsuhiro Harada. Said content wasn’t bluntly specified for now, though Harada did reveal one big perk that only Sony’s console will offer; Tekken 7 will be playable with PlayStation VR! According to Sony, the game will join the efforts of over 200 developers to make content for the PlayStation VR peripheral.

Sadly, details on the game’s PlayStation VR support, which will obviously not be offered on Microsoft’s competing Xbox One, were not outlined either, with Harada merely showing a trailer for Tekken 7, as it will run on PlayStation 4 hardware. Still, it’s probably safe to assume that PlayStation VR will offer a more immersive, likely first-person fighting experience in Tekken 7, at the very least.

Tekken 7 has still not been given a release date for any territory, though Harada reiterated that the game will not launch for consoles, including the PlayStation 4, until its full release has properly launched in Japanese arcades. Even then, the porting process will probably see the console ports taking several additional months, so we probably won’t see Tekken 7 on consoles, or even in North America, until late 2016 at the absolute earliest, possibly even 2017.

Keep engaging Eggplante for all news and updates on Tekken.