Woo hoo! Harrison Wells is back! Well, the Earth-Two Harrison Wells anyway. Tom Cavanagh made a great return to The Flash this week, which was the icing on the cake of a very strong episode that effectively made up for last week’s somewhat sub-par offering. “The Darkness and the Light” stands alongside “Family of Rogues” as a Season Two highlight at this point, giving all of the lead characters great material to work with, and even featuring a villain-of-the-week that was memorable and well-developed. Sadly, you don’t see that every week on this otherwise fantastic show.

Unfortunately, King Shark seems to have vanished for now, which was a let-down, considering his big cap-off appearance at the end of “The Fury of Firestorm” last week. I’m sure he’ll show up again later, but the mix of emotions that came back to the forefront when everyone confronted the new Wells, and had to get used to the idea of a Wells that isn’t an undercover Eobard Thawne, was a superb way to distract from the show conspicuously forgetting about the ten-foot man-shark stalking the dark corners of Central City!

The Earth-Two Wells is also very fascinatingly a different man. As interesting as it was to have Detective West immediately shoot at the guy on sight, Iris confront the likeness of the man responsible for Eddie’s death, and the S.T.A.R. Labs crew try to come to grips with the return of the man that both made them and nearly destroyed them, Tom Cavanagh’s smart performance was the real thing that made Wells’ return to the series (of sorts) so appealing. The Earth-One Wells may have been an almost eerily calm schemer, but the Earth-Two Wells is a brash, rude media darling that seems to be more concerned with covering his ass than actually advancing some sort of agenda.

The character that most benefited from the return of Wells however was, surprisingly, Jay Garrick, who is first seen publicly confronting Wells about the creation of Zoom in a flashback intro on Earth-Two. When Jay reunites with Wells on Earth-One, we see that the two disagree, and distrust one another, particularly when it comes out that Wells is indeed responsible for the creation of Zoom, and also for the creation of the metahumans in Earth-Two, just as with Earth-One, even if Earth-Two seems to have different metahumans than Earth-One does. This also leads to an interesting new dimension to Jay’s character, who is now more vulnerable, and shows that he actually harbours insecurity and inner turmoil about his guilt and failure when it came to stopping Zoom on Earth-Two. Oh, and that awesome hint that he’s buddies with Aquaman, which he addresses while on a stakeout with Caitlin by mentioning his, “Buddy from Atlantis” back on Earth-Two, was pretty cool!

Coolest of all however was our villain-of-the-week, which came in the form of a new female version of DC villain, Doctor Light. Yes, I’m aware that a female version of the character was introduced in DC Comics back in the early 90’s, that being Kimiyo Hoshi, a personality that’s distinct from the usual Arthur Light version of the villain (who was mentioned in passing by Caitlin when she and Cisco were introduced on the second season of Arrow before this series started), but The Flash actually did one better! On The Flash, Doctor Light is the Earth-Two version of Linda Park, who is apparently an accomplished thief in the alternate universe, not a reporter at CCPN. This was actually a superb twist, and one that will effectively surprise even ardent DC fans, who no doubt expected Kimiyo Hoshi to be underneath that mask.

This also mercifully leads to Malese Jow finally having something to do on the show, beyond walk-on cameos in the CCPN building, now that Linda and Barry have broken up. Linda confronting her double was a very tense scene, especially when the Earth-Two Linda announces intent to kill her doppelganger on Earth-One and assume control of her life, so that she can hide from Zoom. It was actually a believable and surprising motivation, and it continues The Flash’s interesting streak of the female metahumans always turning out to be more interesting than most of the (far more frequent) male ones, since Plastique and Peek-a-Boo from Season One were also among the better metahuman-of-the-week personalities. 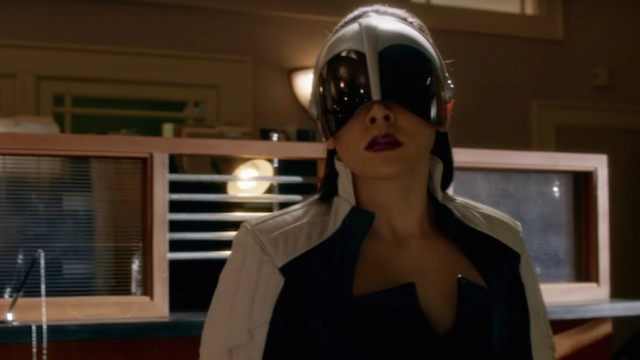 After being thrown by Linda’s face being under the villain’s mask this week, Barry actually ends up temporarily blinded, and this leads into a pretty amusing scene of Barry having to try and hide his blindness from Patty Spivot, now that the two have finally arranged an ironclad dinner date. It was a bit cheesy, but Cisco acting as wingman really made the scene shine, and fortunately, it didn’t come at the expense of Patty’s character, since she did end up deducing that Barry couldn’t see, and was trying to hide that fact from her. Why she didn’t ask more questions about that is strange, and you’d think she’d put two and two together, since a light-manipulating metahuman is terrorizing the city, and The Flash obviously didn’t stop her the first time, though maybe she’s just withholding the knowledge that she’s already figured out Barry’s secret identity. Besides, it’s very satisfying to see the two finally share a kiss, and appear to begin a relationship. Barry’s earned it, that’s for sure!

In fact, the romantic comedy elements throughout “The Darkness and the Light” were pretty much universally entertaining, as Caitlin and Jay almost kiss before being cock-blocked by Doctor Light, and Cisco even resolves to ask out the attractive new CC Jitters barista, initially getting shot down. After the day is saved however, he goes back to sheepishly get a coffee, and the woman says that she was simply caught off guard, and agrees to a date with Cisco. How sweet. Even better however is that the woman reveals her name as Kendra Saunders, the DC Television Universe’s version of Hawkgirl, who will be a lead character on Legends of Tomorrow next year! If you’ve been keeping up with the Legends of Tomorrow press, then you no doubt already recognized Kendra, especially since she made a bit cameo towards the end of the Season One finale, as one of the people gawking at the singularity opening in the sky, but even if she doesn’t have her wings yet, the idea of her having a brief romantic affair with Cisco should be very interesting, especially since Hawkman is also somewhere out there in this universe, as Legends of Tomorrow’s preview press already outed.

That wasn’t the only big development with Cisco however, as his ability ended up being outed by Wells, who has a metahuman detector, and Cisco confesses his ability to sense nearby events to his S.T.A.R. Labs cohorts. This is a bit different from his more offensive vibration-generating powers in DC Comics as superhero, Vibe, though it’s a smart idea to have Cisco currently serve as a more of a supporting personality, not only because it proves that not all metahuman powers have violent applications, but because it’s a good fit for Cisco in Season Two’s dynamic. It’s satisfying to see Cisco adopt the name of “Vibe” at the end of the episode however, and Wells staring at Caitlin as the episode winds down is a great hint that Caitlin’s villainous DC Comics identity of Killer Frost might actually be who Caitlin is on Earth-Two. We’ll have to see, but Killer Frost is clearly getting closer, and the ironic statement from Caitlin that any of the S.T.A.R. Labs crew, including her, wouldn’t immediately turn evil if they got powers from Wells, wasn’t lost on me, and likely not other DC fans!

As for how things ended off with Doctor Light, Wells not only provokes Cisco into successfully using his unstable power to find her by touching her helmet, but Barry is also pushed into generating a Reverse Flash-style speed mirage to confuse Doctor Light, so that he can knock her out in a pretty clever final duel. After Doctor Light is thrown in the pipeline however, Jay announces that he’s leaving the group, since he doesn’t want to work with Wells. That’s unfortunate, but I doubt it will stick forever, especially as his clear romantic attraction with Caitlin is now beginning to be explored. Oh, and apparently, as an epilogue reveals, Zoom has kidnapped Wells’ daughter. Yes, Wells has a daughter on Earth-Two. That no doubt can’t be good.

Like I said, “The Darkness and the Light” had The Flash back in fine form this week, and it could be the season’s best episode to date at this point! The romantic elements were fun, the character reactions to the new Wells were excellent, and our villain-of-the-week was a cut above most of the throwaway baddies that this series has been guilty of in even several of its best episodes. Really though, this series benefits highly from the proper return of Tom Cavanagh most of all, who is as much a key player in this series as Grant Gustin, Carlos Valdes, Danielle Panabaker, Candice Patton or Jesse L. Martin. He may not be the same Wells, but it’s good to have the man back all the same!

The Flash 2.5: "The Darkness and the Light" Review
The Flash superbly rebounded this week with "The Darkness and the Light", which contained lots of fun romantic material, a metahuman threat that's far more interesting than most, and, best of all, the return of Harrison Wells!
THE GOOD STUFF
THE NOT-SO-GOOD STUFF
2015-11-05
93%Overall Score
Reader Rating: (1 Vote)
93%