iZombie featured an interesting carryover from last week’s case in “Max Wager” this week, where the killer from last week becomes the victim this week, thanks to a drive-by shooting that Babineaux just barely dodges. In fact, the title of the episode is a bit ironic, since Max Rager Corporation actually sits out this week’s episode, with focus once again being shifted to the DeBeers family scheming, along with our first proper introduction to crime lord, Stacey Boss.

If you recall from last week, our killer was a degenerate gambler, so when Liv consumes the man’s brain, she starts developing his penchant for betting on everything. It leads to more understated humour compared to many prior episodes of iZombie even this season alone, but the jokes are carefully chosen, and the brain is well utilized for both laughs and the case-of-the-week. Better to go for quality over quantity when it comes to brain mayhem, in most cases.

Aside from the case-of-the-week, Liv and Major also find it tough to resist having sex, even when there’s the question of Liv inadvertently zombifying Major in the process. Some of these scenes felt a bit like filler, but they were equal parts sweet and amusing, so it was forgivable. This subplot also gave Ravi something to do this week, as he tests every brand of condom he can get his hands on, in hopes of determining that one of them protects from zombieism. Sadly though, every last condom fails to prevent zombification, as the zombie virus is (apparently) one one-hundredth the size of most other viruses, so it just passes right through condom barriers. Ravi manages to convey the news just in time, though this didn’t ultimately tell us anything about zombieism that we didn’t already know. Didn’t Season One already establish that zombieism can be transmitted sexually, without exception?

Anyway, the material with Blaine was a lot more engaging, as Angus discovers that his son is no longer a zombie. In response, he coerces Blaine into working for him, under threat of turning him back into a zombie, leading to Blaine going through a Major-style bender, which Liv bears witness to, right as Babineaux takes her to question the widow of the victim. This was actually one of Blaine’s most emotional episodes to date in fact, as we see a vulnerable side of him that iZombie has never truly explored before. For the first time, not only is Blaine not in charge, but he actually questions whether he’s amounted to anything truly worthwhile. This all culminates in a surprisingly heart-wrenching scene, where Blaine has to smother his ailed grandfather to death, whom we know Angus had some hand in the ailment of. Blaine then steals the brain of his grandfather, for some unknown purpose.

The real highlight this week however was the introduction of Stacey Boss, which was done incredibly well. Over the course of this week’s case, Liv and Babineaux make their way in and out of a barbershop, whose owner moonlights as a bookie for gamblers. The bookie is the prime suspect, though Liv gets distracted by betting on sports games, which leads to some solid chuckles, but also occasionally gives some surprising insight into the case, particularly as the patrons of the barbershop, along with the barber and his lawyer, all casually debate possibilities as to who is truly behind everything. It’s a fun setup that the episode executes very well.

The most impactful scene in the barbershop however is when a customer suggests a scenario where Liv could force a suicide, before returning to a cheery disposition right afterward. A few scenes later, Peyton stumbles on to the same man in her office space during a late night, with the man re-arranging her evidence map to the correct layout. Yes, this unassuming little guy is Stacey Boss, it turns out, and he’s the crime boss that so many powerful folks in Seattle, particularly Blaine, seem to be buzzing about. Not only is Eddie Jemison exceptionally cast as Boss, being intimidating, but also nicely quirky, but his first turn as the character is instantly memorable. It was especially thrilling when he pointed out that Peyton, a 27-year-old greenhorn ADA, was put on his case because the judge doesn’t actually want it to go through. It’s an interesting observation, though I imagine that this will only motivate Peyton harder to succeed in bringing Boss to justice.

The case-of-the-week’s resolution was pretty inspired as well. Liv uses the gambling knowledge that her brain grants her to deduce that one of Major’s favourite basketball stars fixed games in college. Since said athlete was a buddy of the late victim, and the killers were hired Serbian thugs, Liv and Babineaux manage to prove the guy’s guilt, along with Peyton, when they figure out that the athlete hired the hit to prevent the victim from blackmailing him, under threat of exposing his past misdeeds in college. It felt like a clever resolution, and for the first time in a while, the show didn’t seem like it was pulling a killer out of its ass in the final moments. Season Two has been suffering a bit with the cases-of-the-week, as much as everything else has remained strong, so it’s satisfying to see “Max Wager” deliver another worthy whodunit, after “Love & Basketball” also had a pretty solid one last week.

Finally, the episode ends with the surprise revelation that Major’s latest zombie victim is none other than Angus DeBeers, with Blaine getting the news after tending to his late grandfather at the funeral home. Don’t think that Blaine’s troubles are over though! Turns out, Major has been faking several of the zombie killings, storing the unconscious bodies in freezers that are hidden in a storage unit, in an effort to fool Max Rager. Looks like Major still isn’t a lost cause yet, even if his struggle against Max Rager certainly doesn’t look to be over any time soon. 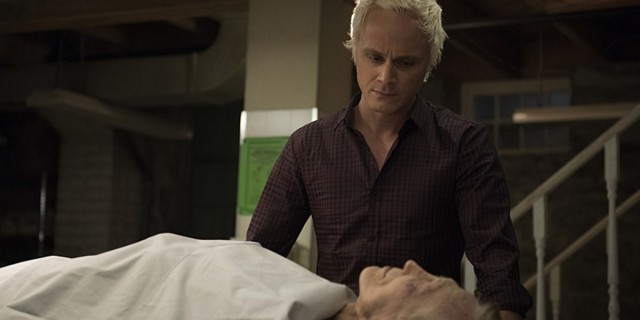 All in all, “Max Wager” is another especially strong episode for iZombie’s second season, having loads of great character material, as usual, and presenting a strong case-of-the-week layered into a script that had a pretty satisfying count of twists and turns, without sacrificing the fun. After we’ve seen a new side of Blaine, Stacey Boss introducing himself, and the reveal that Major is pulling one over on Max Rager, things are no doubt going to keep heating up on the show from here.

iZombie 2.6: "Max Wager" Review
iZombie delivered another especially strong episode this week, thanks to the stirring introduction of Stacey Boss, a more vulnerable side of Blaine, and an especially satisfying case-of-the-week that effectively blended brains, laughs and intrigue.
THE GOOD STUFF
THE NOT-SO-GOOD STUFF
2015-11-13
92%Overall Score
Reader Rating: (0 Votes)
0%