With the huge twist that Inhuman serial killer, Lash is none other than May’s former husband, Dr. Andrew Garner, Agents of S.H.I.E.L.D. once again kicked into high gear this week in “Chaos Theory”! With Coulson and Rosalind about to take the next step in uniting S.H.I.E.L.D. with the ATCU at the same time, May races against the clock to get to Dr. Garner on her own terms, before S.H.I.E.L.D. learns of his true nature.

In fact, if anything, this episode suffered from being a bit too speedy. Things seemed to be happening a mile a minute for the most part, even if we occasionally wound down with the more slow-paced subplot of Fitz trying to find ways to re-open the portal to the alien world for Simmons. This was still a good episode, but given how quickly the show strove to resolve the Lash situation, it felt like the show abruptly changed gears by suddenly having everyone learn Dr. Garner’s secret all at once, resulting in a climax that pretty much pushes the character to his last stand already.

On the bright side though, even if the pacing could have done with a bit of a slowdown, the episode did bring up another interesting spin on the Inhuman debate, which Daisy and Rosalind discuss rather heatedly, after Rosalind boards the base to prepare for a meeting with the president, which Coulson will be sitting in on in an unofficial capacity as a consultant. Daisy thinks that any Inhuman can be rehabilitated with enough care and patience, but Rosalind urges that not all Inhumans offer enough time to make them safe and controlled, thus requiring decisive action. There didn’t seem to be any real fallout behind Daisy thinking that Coulson is somehow completely alright with the ATCU’s operation during last week’s episode, but both parties seemed to present compelling arguments, even if Rosalind ended up getting the last word, by pointing out that, for every Daisy Johnson amongst the Inhumans, there is also a Lash.

Lash’s character served as a pretty good allegory for this debate. Dr. Garner resists the urge to kill Joey, who is revisited from the season premiere, despite a quick scare seeming to trick audiences into thinking that Dr. Garner had given in to his beastly urges, and the episode smartly using tender interactions with May seemed to nicely highlight how Dr. Garner is far from evil. Naturally, Lincoln comes back on to the scene to play devil’s advocate though (apparently, Mack has secretly been in touch with him too), and claims that Dr. Garner must be neutralized, since no Inhuman can change forms. Dr. Garner is still in transition, and once the transition is complete, he will become Lash permanently. Clearly, there’s no time to lose!

Like I said though, Lincoln and Mack piecing together the intel on Dr. Garner for Coulson, Daisy and Rosalind, right as May manages to get to her husband, felt a bit overly quick. May forces the truth out of her former husband, but is iced in the process, waking up chained to a radiator in an abandoned building. Dr. Garner urges May not to break free, since he doesn’t know if instinct will take over again, and May tries to talk him down, as Coulson puts together a joint S.H.I.E.L.D./ATCU op to stop Lash once and for all.

This leads to a pretty strong climax, with Lincoln goading Dr. Garner into transforming into Lash, who then plows through Rosalind’s men, and nearly kills Rosalind herself, though fortunately, Rosalind is saved by Daisy cushioning her high fall. May and Lincoln manage to get Lash near a containment unit, and May manages to soothe her husband enough to get him to turn back into a human… Before unloading a full clip of bullets into him, so he falls into the containment cell, before he’s gassed into stasis! It was incredibly dramatic to have May admit to Coulson soon afterward that she wasn’t sure if shooting Dr. Garner in human form would kill him, and the look of heartbreak on her face was very powerful, just as it was when she first learned the terrible truth about Dr. Garner. May is stone-cold, but it’s never difficult to see why, when she always seems to have to gun down people that should be innocent, even if the ATCU working on a cure may provide some hope for her ill-fated husband.

With that said though, it was a bit of a let-down that Agents of S.H.I.E.L.D. is already taking Lash out of play, after so much buildup with his character. Surely, they could have stretched the neutralization of Lash into at least the midseason finale. Maybe the show is getting overstuffed, but, even with this strong climax, the capture of Lash felt anticlimactic. Likewise, Lash’s psychology is a bit hard to swallow. His confession that he’s compelled to kill Inhumans he deems to be evil is sort of in line with Lash killing unworthy Inhumans in Marvel Comics lore, and explains how he was never compelled to hurt Daisy or anything, but it’s nonetheless a dumbed-down, hokey version of the same idea from the printed panels. Obviously, you don’t want to recycle the exact same Lash backstory that exists in Marvel Comics for the Marvel Cinematic Universe, but surely, the show could have done better than just making Lash into a misguided vigilante with a need to target Inhumans.

At least the epilogue reveal was decent though, with Ward meeting up with the mysterious Gideon Malick to discuss the fallout of Werner von Strucker being nearly killed. Yes, nearly. Apparently he’s in a medically-induced coma. I guess Marvel predictably didn’t want to wipe out the entire von Strucker bloodline in the MCU, and that might not be a bad call. Anyway, Malick gets a call while talking to Ward, who voices his latest desire to take out Coulson and bring down S.H.I.E.L.D., and on the other end of the call is Rosalind! Apparently, Malick was going to be at the meeting with the president as well, and this begs the question of whether Rosalind is a good guy or a bad guy once again. Fortunately, her motivations remain interesting to explore, and the implication that she slept with Coulson off-screen is very tantalizing indeed!

Like I said, the episode’s subplots were far slower, but there were some standout emotional scenes with Fitz, who listens to Simmons’ recordings from the alien planet as he tries to fix her phone, in an attempt to gather data on opening the portal. Bobbi and Hunter also hang about, with Bobbi trying to talk Hunter down from pursuing Ward, though this was something the episode seemed to rush through. Are you going after Ward, or aren’t you? Make up your minds! The hint that Will could be working for a secret order that goes beyond NASA, even unknowingly, is very interesting though. It will no doubt also make retrieving Will from the mysterious planet more complicated than just a simple search-and-rescue too! 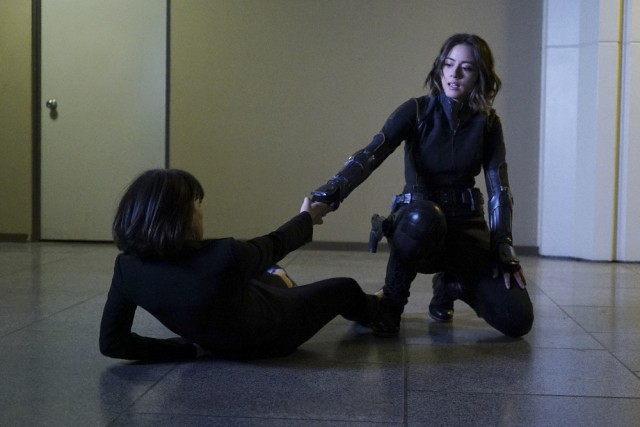 “Chaos Theory” was more or less all about wrapping up the Lash plot as soon as possible though, for better or for worse. Despite some of that decent Fitz material, most of the episode continued the Inhuman debate through the apprehending of Lash, though despite a mostly thrilling story this week, Lash being gone means that a major pillar of this season’s storytelling is already out of the picture at this point. Maybe we’ll get a revisiting of the Lash plot later, but for now, it seems like this was too easy of a win. Oh well. At least Ward has got another scheme waiting in the wings.

Agents of S.H.I.E.L.D. 3.7: "Chaos Theory" Review
Agents of S.H.I.E.L.D. delivered a thrilling, provocative episode that was all about neutralizing Lash this week, though Lash might have gone down too easily, despite lots of sharp, emotional and well-written debates about where to go next with the Inhuman problem.
THE GOOD STUFF
THE NOT-SO-GOOD STUFF
2015-11-13
78%Overall Score
Reader Rating: (0 Votes)
0%