Things got real for Barry and co. on The Flash this week, as they got cocky, and began to meddle with a force that they didn’t understand. As the episode’s title suggests, Season Two’s arch-villain, Zoom made his big debut this week, after merely being seen in passing beforehand, and his grand entrance certainly wasn’t wasted! “Enter Zoom” is a superb episode, one that beautifully builds up a giddy, carefree tone before slamming audiences back down to reality when we see just what exactly Team Flash is up against!

The episode begins with an opener that seemingly shows The Flash being defeated by Doctor Light, though this is something that audiences can no doubt see through, since it goes by quickly, and the angles suggest that there’s more to this story. Things properly pick up three days earlier, with Barry interrogating Doctor Light in her cell within the pipeline, who explains that she wanted to kill the Earth-One Linda Park so that she could leave her body for Zoom to find, and disappear. Apparently, it was the best bad idea that she had.

Building off of Doctor Light being such a great villain-of-the-week in “The Darkness and the Light” last week, we continue to get a nice tease of just how dangerous Zoom really is. That’s why it’s a bit unfortunate that Doctor Light escapes the pipeline in a bit of a contrived way, then simply vanishes. The show tries to explain this by saying that the S.T.A.R. Labs building running on fiber optic energy allowed Doctor Light to, “Hack” her way out, before turning invisible and stripping down so that she could get away, but it feels like a questionable explanation. Then again, I suppose it’s an inevitable evil in having to get rid of Doctor Light for now, since it doesn’t seem likely that she’d be willing to give up her clothes and sit in a pipeline cell naked.

Yes, the clothes of Doctor Light become very important, as Linda Park tells Iris that she’s restless in trying to maintain her job at CCPN, and act like nothing happened, after a metahuman that looks identical to her killed her boss. Iris takes Linda to the West house to give her a place to hide, where she ends up cooking a small army’s worth of food to deal with the nervousness, but a musing by Iris leads to Barry being given an idea at this point; Dress up Linda as Doctor Light, then have her fake successfully defeating The Flash to lure Zoom so that he can be stopped with a speed dampener being developed by Cisco and Wells.

This leads to a very amusing sequence of events, where S.T.A.R. Labs tries to train Linda to masquerade as Doctor Light. Naturally, it doesn’t go that well to start, though we do get an interesting look at a secret hobby of Cisco’s, which apparently consists of building exaggerated cardboard cutouts of himself, Caitlin, Detective West and Barry. How does he have this hobby? Why does he have this hobby? Who cares, because it’s hilarious to see Cisco’s brain farts lead to faulty fake Doctor Light gloves that set a cardboard Detective West on fire! 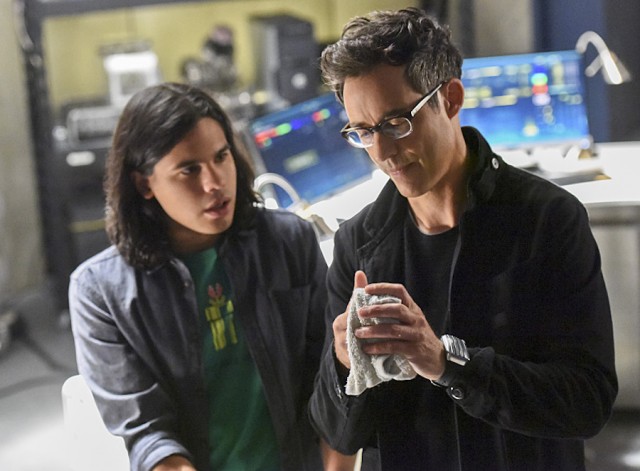 More than being there for its own sake though, the humour served an important purpose, as it helps to lighten the tone of the episode to the point where both the characters and the audience would come to think that everything will be fine. Despite the warnings of Linda being put at risk, Barry and the viewers will be relaxed and ready for Zoom. Even the goofy skit that Barry and the disguised Linda prepare is very funny stuff, as their lack of acting talent has them trying to emulate hokey lines from Cisco, simulating a super-powered duel that culminates in Barry faking injury, and Linda tossing Barry’s Flash Emblem through a nearby breach to summon Zoom. After an hour though, Zoom doesn’t come…

It was a valiant effort, but it looks like the plan was a scrub. That’s ok. What matters is that everyone had fun, right? Hell, Barry even confessed his secret identity to Linda, whose first realization is that she’s made out with The Flash before! It seems like there’s smiles all around, and Team Flash is just going to go on their merry way… Until Linda walks out of the CCPN building, and is snatched by Zoom out of nowhere!

This is where the episode leads into a jaw-dropping and very harrowing climax. Barry meets Zoom on the roof of S.T.A.R. Labs, and manages to save Linda after Zoom drops her off of the roof. From there, Barry taunts Zoom, and prepares to use the lightning bolt trick that Jay taught him a few episodes back!… Except, Zoom is so fast, that he effortlessly snatches the lightning bolt out of the air and hurls it right back at Barry! Uh oh. Even when Barry lures Zoom into the air to exercise terminal velocity and equalize the two speedsters, Zoom still takes the upper hand, violently brutalizing Barry into submission, breaking his spine so that he can’t escape, then speeding his battered body around Central City, showing it to the CCPN, the CCPD (who unleash a hail of gunfire, which Zoom casually catches with one hand and drops before all of the officers), and finally, bringing Barry back to S.T.A.R. Labs to torture him for just a bit more, and kill him. Cisco manages to surprise Zoom with a speed-dampening dart, which leads to him retreating before Barry is fully dead, but it didn’t feel like any kind of victory. 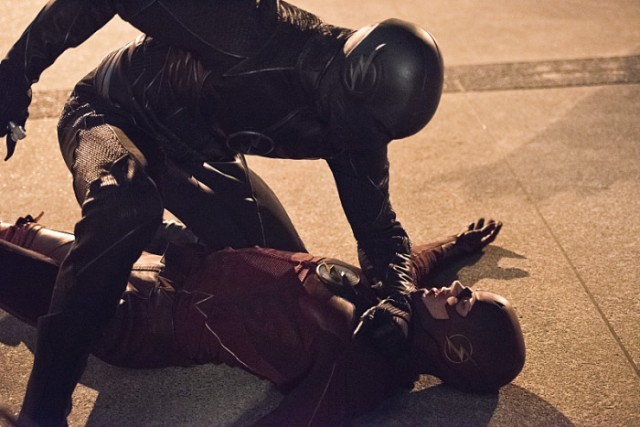 Despite Wells’ claim that Zoom is human, or was at least once human, he doesn’t feel human. He feels like a literal demon. He makes Reverse Flash from Season One look like an amateur. The character’s impression was immediately made, and the sheer scale of such an enormous threat was effortlessly conveyed. It was a fantastic kick-off to Zoom’s proper presence in Earth-One’s Central City, and the episode ending with Barry realizing that he can’t feel his legs is even more harrowing. Team Flash was crippled in one fell swoop by Zoom, and there’s no way that he’s going to stop. What now?

Even with no proper villain-of-the-week this week, the episode expertly established Zoom as this season’s big villain, and even gave us some more neat insight into the Earth-Two Harrison Wells. We see that he has an occasionally strained relationship with his daughter, though still loves his daughter very much, and we also learn that Wells’ daughter is in fact Jesse Quick, a recognizable speedster from DC Comics! This, along with the presence of Jay Garrick, is another hint that we may see some sort of Justice Society eventually appear in Earth-Two. That would be very cool! 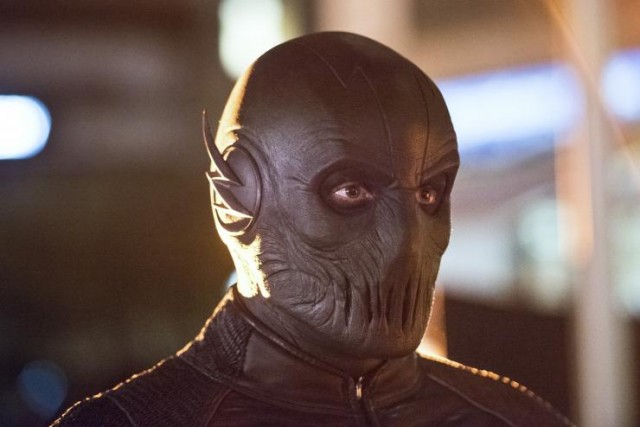 Even then though, Zoom was front and center this week, and even though he didn’t properly appear in the flesh until the end, the buildup, climax and fallout of “Enter Zoom” were done excellently. This is a brilliantly crafted episode that puts everything into selling the true stakes of the season, and was equal parts entertaining and shocking. Zoom is clearly not a force to be trifled with, but if the entire journey to stopping him is just as rewarding as its first step, we may just have a villain who can surpass even the murderer of Barry’s mother!

The Flash 2.6: "Enter Zoom" Review
The Flash properly introduced its arch-villain for Season Two this week, and it did so flawlessly, building up a jovial episode with a brutal, shocking conclusion, and perfectly establishing just how much of a threat Zoom really is!
THE GOOD STUFF
THE NOT-SO-GOOD STUFF
2015-11-13
94%Overall Score
Reader Rating: (0 Votes)
0%