Gotham really knocked it out of the park this week, delivering a new Season Two highlight at this point in “A Bitter Pill to Swallow”, an episode that brilliantly explored the blurred line of justice and violence in Gotham City, from the perspective of both the GCPD and the underworld.

Things kick off when Tabitha visits an underground casino to meet with a mysterious woman, simply known as ‘The Lady’, who happens to be played by Michelle Gomez of Doctor Who fame! Even being a passive presence, The Lady was a very enjoyable and charismatic character, and one that hopefully shows up again, since the attempt by Tabitha to put a hit out on Gordon naturally doesn’t pan out. 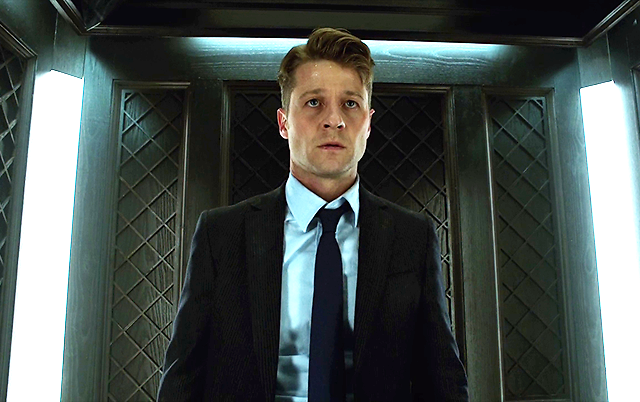 Even with this predictable result though, this episode used the idea of a reprisal by Tabitha to really show, in some ways better than Gotham has ever previously done to date, just how delicate Gordon’s morals are, when he’s truly threatened with death. Better still is that Captain Barnes is taken along for the action in this episode, giving him an especially good chance to really play off of Gordon, as someone who appears to be untainted by the murky moral greys of Gotham City, even compared to the normally just and honest Gordon. The only downside to this is that Barnes essentially fills in for Bullock this week, who is entirely absent. That’s a shame, since it would have been cool to see Bullock reacting to some of the eccentric assassins that The Lady sends after Gordon, but I get why Barnes was put front and center instead, since it gives the character an opportunity to put his money where his mouth is, finally.

Things initially appear fine, as Gordon prepares to study Galavan’s office for evidence, alongside Barnes, a forensics person, and another rookie cop who recently joined the GCPD. When Gordon is in the elevator however, he’s attacked by a bespectacled killer, whom he narrowly manages to get the upper hand on, cuffing him in the crime scene. Soon after, the other killers start to pour in, and both Barnes and Gordon prepare to fight for their lives in a shootout. The forensics guy is killed in the process however, with Gordon narrowly shooting his prisoner in the eye when he takes the rookie cop hostage, killing him with expert precision in a very badass scene, complete with one-liner. Damn! The cop is then sent away, though not before Barnes is surprised by a not-quite-dead assassin, taking a knife in the leg before finishing the killer off.

This is when one of the episode’s best sequences plays out, as Gordon and Barnes discuss their separate histories, with Gordon confiding in Barnes that Leslie has been probing him about the monster within that Barbara alluded to in the cathedral during last week’s episode. Gordon expresses concern about crossing the line, at which point, Barnes chimes in with a story from his military history, where he pursued a fleeing kid and merely meant to scare him, before deciding to kill him in the moment, after a combat high. Barnes explains that there is no line, and there is only the law, which he and Gordon have sworn to upheld. This provides the slight implication that Barnes’ hardline, no-nonsense attitude could have come from this traumatic memory, especially since he admits that the event kept him awake every night for many years. It’s the most vulnerable that we’ve seen Barnes at this point, and it suggests that he’s not a crusader for its own sake, but perhaps hardens his resolve as a means to rise above the atrocities of his past. 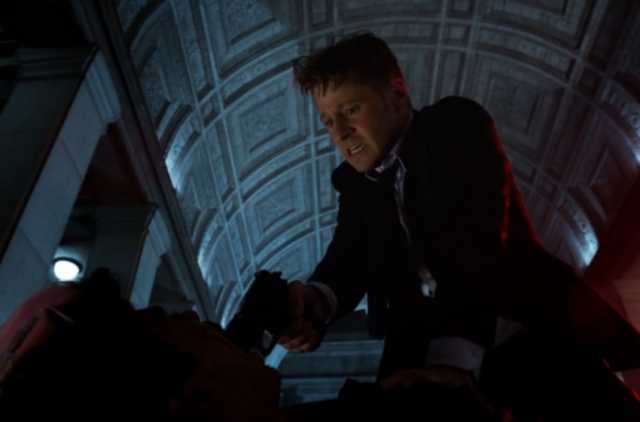 Whatever the case, The Lady grows desperate after Gordon’s crew starts killing all of her killers, so she calls in a man that she formerly fired from her employ, for his extreme measures. This man happens to be none other than Eduardo Flamingo, or simply, “Flamingo”, a more recent Batman villain from DC Comics, who, despite his showy pink costume in the printed panels (which is merely represented by a feathery swish of pink hair on Gotham), is actually a very dangerous and sadistic murderer who has a tendency to eat the faces of the people he kills. As with the comics, Flamingo is a cannibal on top of a killer, and is established as a quirky, but undeniably inhuman savage right from the get-go.

Honestly, Flamingo is definitely one of the better villains that we’ve seen so far on Gotham this season, alongside the gender-swapped Firefly from the two-parter a few weeks back, despite the fact that he doesn’t show up until the episode’s climax. He’s actually legitimately terrifying, and the scene where he non-verbally taunts Gordon to kill him after Gordon puts a gun in his mouth, after he gains the upper hand in a pretty great climactic duel, is pretty intense. He gets even better when Gordon ultimately fights back the urge to shoot him, proving that he’s a better man than Barnes in a nicely ironic mirroring of Barnes’ story, particularly since he has far more justification to kill this fiend, though this inadvertenly leads to Flamingo killing the rookie cop when he’s hauled into the GCPD, by brutally ripping into her throat with his teeth, as a group of nearby cops whack him with batons. It was a powerful visual, and it nicely hammered home that, despite his moral compass, taking the high road doesn’t guarantee Gordon a full victory, nor does it exempt him from the possible losses that may be suffered from Gordon sparing criminals.

It was also a really neat twist to see Tabitha Galavan visit her brother in prison, and have it revealed that Tabitha doesn’t actually care about her brother’s imprisonment. The whole reason that she ordered hits on Gordon was because she believes that he hurt Barbara, and nothing more. Galavan even reprimands his sister for taking out the hit on Gordon, saying that she’s not allowed to do anything without his orders. It was another very interesting scene that didn’t play out the way that you would think, even if Tabitha Galavan is still a pretty one-note sadist. At least she’s an impactful sadist though!

On the other side of things, Penguin is forced to lie in a bed and recover by the freshly insane Nygma, who attempts to bond with the fallen crime boss by bringing him a lackey of Galavan’s. Nygma suggests that Penguin vent some frustration by killing the man, but Penguin refuses, saying that he’s had enough of violence, and that he’s leaving Gotham City forever. This leads to a pep talk, of sorts, by Nygma, who says that, thanks to the death of his mother, Penguin is now free. He uses the comparison of how he keeps Ms. Kringle’s glasses after her death, to remind him of how liberated he is from not only social convention, but of the love that made him weak and awkward in the first place. According to Nygma, a man encumbered by emotional vulnerability is a free man. This eventually convinces Penguin and Nygma to finish off the goon off-screen, and Penguin renewing his resolve to stay in Gotham City and strike back at Galavan, nicely leaving what happens next to the viewer’s imagination. Even beforehand though, the twisted bonding between these two is enjoyable and unpredictable, even if they don’t ultimately wreak any havoc in Gotham City proper.

The remaining plot this week dealt with Bruce, who continues to see Silver St. Cloud against Alfred’s wishes. Bruce believes that, by seeing Silver, he can eventually find intel about who killed his parents. Obviously, Alfred sees through this however, and even Selina comes in to warn Bruce that Silver is bad news, and Bruce is still wrapped around her finger. It was neat to see Alfred easily outsmart Bruce right when he, and the viewer, thought that he would sneak out successfully, with Alfred directly pointing out that Bruce does not yet possess the necessary level of deception to extract the information out of Silver, nor obscure an action from Alfred. He will one day, when he takes to the streets as Batman, but that’s not for a while yet. For now, Bruce is still very young and very impulsive, though his subplot failed to compare to the excellent plots with the rest of the characters, even if it was still largely entertaining. We already know that Silver is bad news, so, despite the entertaining scenes, Bruce’s plot didn’t seem to go anywhere new compared to the rest, sadly. 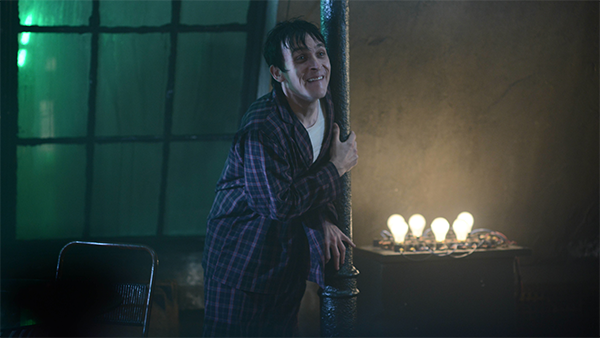 Nonetheless, “A Bitter Pill to Swallow” was a superb episode of Gotham, one that perfectly balanced a sense of thrills, surprises, drama and action. It also had pretty great villains in both The Lady and Flamingo, along with the other eccentric goons that were sent to kill Gordon this week. Even with Galavan barely appearing in this episode, the show didn’t seem to suffer in the slightest, as Gordon continued to teeter ever closer on the edge of violence, particularly when making the right decision ended up leading to the brutal death of a colleague, right when he thought he’d won.

Gotham 2.9: "A Bitter Pill to Swallow" Review
Gotham soared with a new Season Two high point this week, one that continued to push Gordon to his limits both physically and mentally, while also exploring an equally effective moral debate between two future Batman foes.
THE GOOD STUFF
THE NOT-SO-GOOD STUFF
2015-11-18
92%Overall Score
Reader Rating: (2 Votes)
81%