Supergirl postponed the episode that it had planned for this week, in the wake of the Paris attacks from last Friday, since it dealt with a villain that was orchestrating bombings throughout National City. Probably not what viewers want to see this week, understandably. So, that episode, “How Does She Do It?” has been swapped with the episode originally planned for next week, “Livewire.” This is apparent in some places, namely that it’s Thanksgiving all of a sudden, James is now dating Lucy Lane again (kind of spoiling the drama for the pulled episode next week), and events from the pulled episode, such as the bombings and Cat Grant’s son, are referenced with no context, but this all understandable.

The title of this episode really says it all, since “Livewire” is completely stolen by its title villain, an occasional enemy of both Superman and Supergirl in DC Comics lore. Livewire marks the first truly great villain that Supergirl has offered, with the show possibly finding its answer to The Flash’s Captain Cold, or Arrow’s Count Vertigo in Livewire, with both of those foes being a fun nemesis that isn’t a deep villain, but is so well-refined and charismatic that they’re always fun to watch regardless, much like this new version of Livewire.

Similarly, Livewire, or, Leslie Willis, as she starts out, gets a pretty straightforward backstory. She’s a shock jock (get it?) working for CatCo, who is abrasive, witty, and someone that National City loves to hate, particularly due to her massive hate-boner for Supergirl. Cat Grant groomed Leslie to get where she is, though constantly butts heads with her, since Leslie gets off on pushing the envelope, with Cat particularly displeased about the Supergirl rants.

After finally becoming fed up with Leslie, Cat transfers her to traffic duty during a thunderstorm, which gets the helicopter struck by lightning, forcing Supergirl to intervene. When Supergirl tries to pull Leslie to safety however, she’s struck by another bolt of lightning, with her Kryptonian DNA channeling the shock through Leslie in such a way that it turns her hair stringy and grey, and morphs her into a being of pure energy that can take her physical human form if she chooses, one that can also manipulate electricity, and travel through anything that can carry an electric current. Yes, she’s essentially a DC version of Marvel’s Spider-Man villain, Electro, and her backstory isn’t any more sensible than it is in the comics, where she just gets electrocuted and gets powers somehow, but at least Supergirl tried to create a better excuse for Leslie to suddenly become an electric being.

In any case, Brit Morgan’s highly entertaining performance makes Livewire a true delight, being an over-the-top, scenery-chewing menace who immediately gets off on her overwhelming power. Blaming Supergirl and Cat Grant alike for the incident that gave her powers (despite being happy about the powers?), Livewire immediately tries to take revenge on both, though goes for Cat first, since she knows that Cat will be in her office on Thanksgiving. Fortunately, Kara, who was called to the office when it’s affected by blackouts caused by Livewire sucking up energy from National City’s buildings, manages to sneak off and return as Supergirl, after Cat believes she’s told her assistant to go twenty floors down to call security. Kara manages to get rid of Livewire, after narrowly saving Cat from plummeting to death in an elevator, fortunately, though she also learns that her heat vision only makes Livewire stronger, and she can’t physically hurt her, since Livewire can just turn into energy. 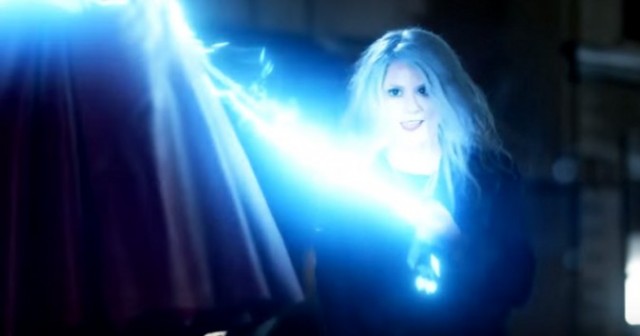 When the DEO steps in to investigate the incident, disguising themselves as the FBI, Kara, in her civilian form, is left to hang out with Cat for a bit, who naturally laments the DEO agents poking around her building. The two have a surprisingly poignant bonding moment, where we continue to peel back the surprisingly sensitive backstory of Cat, after Kara reveals that she lost her parents at a young age. Cat confesses that her mother has always viewed her as a disappointment, and she pushes both herself and her employees as a way to earn her reputation, since it’s important to her to be better than what her mother said she was. It’s really easy to appreciate how well the show makes Cat Grant a snarky bitch without making her heartless. You also once again get that glimmer of respect and almost maternal attention that Cat gives toward Supergirl as well, which is one of the most inspired new directions for established characters from Superman lore that Supergirl offers.

Regardless, Kara dons her Supergirl outfit to meet with Cat later, with Cat suggesting that she can draw Livewire out, if Supergirl can stop her for good. With a handy gadget from the DEO, which is more than a little like the trap from Ghostbusters, which even Kara points out (once again, TV networks, admitting that you stole a design doesn’t make it alright!), Supergirl confronts Livewire again, in what’s honestly a pretty awesome climactic battle, especially with some of the surprisingly great electric effects from Livewire’s electric assaults, right down to some Ivan Vanko-style dual electric whip action!

Naturally, Supergirl wins with the old ‘spray the electric woman with water’ trick, and the DEO traps its first human prisoner, containing Livewire in some sort of glass cell that somehow blocks her electric abilities, or puts her in stasis, or, something. I guess we shouldn’t question it too much when we have The Flash sticking its villains in dinky pipeline recesses with no bathroom, and Arrow dumping at least a couple of them on a deserted island with no supervision. What is it with DC shows and weird prison accommodations? Well, whatever. What’s really important is that the show wisely didn’t kill off Livewire, hopefully leaving her primed and ready to wreak havoc again down the line!

Sadly, beyond the Livewire material, most of the episode was far less interesting. We got some flashbacks that tease the Danvers family affiliation with the DEO going back much further than previously believed, but most of all, we got a visit from Eliza Danvers, the mother of Alex and adoptive mother of Kara, for Thanksgiving, along with Winn coming along to dinner, on account of having no other family or friends to celebrate with. The show tries to draw a parallel between Cat and Eliza, since Eliza is clearly harder on Alex than she is on Kara, but it doesn’t totally work, since the show is reaching to make Eliza stricter on Alex, to the point where Eliza sort of comes off as a nasty parent when she really shouldn’t. Moreover, while her speech to Alex about being tough on her because she wants her to be better than her mother was sweet, it didn’t totally make sense. How is clearly showing preferential treatment to the adopted sibling supposed to make your biological daughter do anything other than resent you?

Likewise, the James material continues to be rather boring, and his decision to run off with Lucy all of a sudden is lacking a lot of context, since we have to wait an extra week to see the episode where this is all supposed to be explored. Again, this is forgivable, but this also makes it impossible to care about the romantic tension between Kara and James at this point, making these scenes all feel like filler. Winn’s scenes definitely went better than James’ scenes, especially when Winn starts to foreshadow his lineage from Superman villain, Toyman, admitting to Kara that his dad is a terrible person that is currently in prison, and deserves to be there. This should no doubt have Superman/Supergirl fans really looking forward to Winslow Sr./Toyman coming to National City, which we already know is happening around the midseason break point. 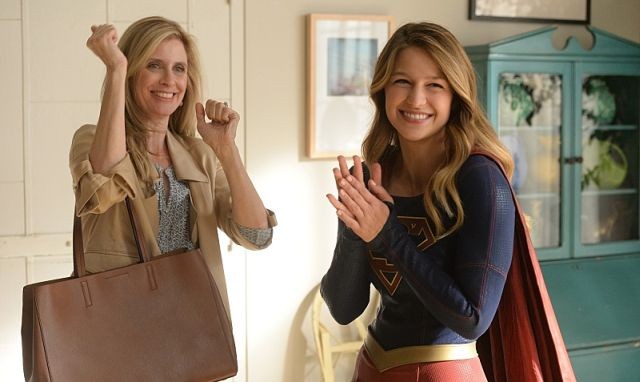 Even if its subplots were far less interesting in comparison to the main plot and villain, “Livewire” was overall a pretty entertaining episode of Supergirl, despite being slightly crippled by having to air out-of-order with the episode that was supposed to precede it. I really hope that Brit Morgan returns to the show soon, since I doubt that this is the last we’ve seen of Livewire, and that’s a great thing. Even beyond that though, it was great to get more compelling peeks into the backstories of the Danvers family, Winn and Cat, though I will say that James still needs to work on being more than a friendly face.

Supergirl 1.4: "Livewire" Review
Supergirl finally delivered a great, highly entertaining villain in DC baddie, Livewire this week, who completely stole the show with an entertaining performance and set of effects, even if the bulk of the subplots suffered in comparison.
THE GOOD STUFF
THE NOT-SO-GOOD STUFF
2015-11-18
83%Overall Score
Reader Rating: (1 Vote)
12%