Zoom’s big entrance was a smash hit last week, and naturally, Barry is still feeling the pain from that bad loss. This creates a welcome opportunity to switch gears once again however, and bring in another large-scale Flash villain. “Gorilla Warfare” naturally sees the return of Grodd, who is mind-controlling scientists to steal intelligence-enhancing drugs for him.

It’s neat to see that Grodd has continued to get smarter, even after his defeat towards the end of Season One. His intelligence and self-awareness has reached the point where he’s become lonely, and desires to make more apes like him. Obviously, this would be bad news for Central City, but the appealing thing about Grodd is, he’s still very much an animal at this point, operating on a baser level of instinct compared to a human. He’s still understanding himself, and hasn’t yet realized his own terrifying power. It makes Grodd kind of a sympathetic monster in a way, and he still stands as one of the better villains that’s so far appeared on The Flash, making his re-appearance feel like its own reward.

Also quite interesting about this episode is that, for most of the runtime, Barry is benched and out of action. This means that it’s up to the rest of the crew to deal with the threat of Grodd, particularly Wells, since Earth-Two apparently has an entire refuge for gorillas that were experimented upon like Grodd was. Yes, this is obviously Gorilla City from DC Comics lore, which would seem to be the final stepping stone for Grodd to realize the true potential of his super-villainy from DC lore on The Flash.

Just as it’s discovered that Grodd is back however, he mind-controls Caitlin into leaving S.T.A.R. Labs and going off with him to a mysterious location. Grodd demands that Caitlin find a way to create companions for him, leading to Cisco and Wells doing everything they can to get Caitlin back, and eventually settling on a risky plan to dress up Wells as Reverse Flash, in the hope of tricking Grodd into thinking that the Earth-Two Wells is actually the Earth-One Wells, hopefully giving Caitlin an opportunity to escape.

It’s always nice to get a reminder that Barry isn’t the only competent member of Team Flash, especially as Barry predictably finds himself unable to overcome the brutal psychological breaking that he suffered at the hands of Zoom during his humiliation before the city at the end of last week’s episode. With his physical injuries starting to heal, but his mental scarring still very much present, Iris gets the idea to call Henry to S.T.A.R. Labs, giving us a welcome return for John Wesley Shipp to the show.

As with the bulk of their interactions from Season One, the emotional dialogue between Barry and his father was universally great stuff. Barry eventually confides in Henry that he can’t get past the feeling of being destroyed not only as a man, but as a symbol before the city that he was supposed to be the protector of. Henry however reminds Barry that he understands all too well the feeling of being broken, as he was disgraced following his wrongful conviction for the murder of Nora, and that the only way to move past it is to embrace it. Finally with renewed resolve, Barry then takes up the mantle of The Flash once again, just in time to lure Grodd to a breach that will see him sucked into a portal to Earth-Two, where he can roam free in Gorilla City.

The plan goes well, which means that we unfortunately don’t get another cool Flash/Grodd battle, but there’s always later in the series to have another one. Barry manages to knock Grodd into the portal successfully, which gives us a quick peek at the DC Television Universe incarnation of Gorilla City on Earth-Two, promising more great Grodd developments to come, as Grodd roars at the sight of his new refuge, both triumphantly, and vindictively.

The Grodd material remained very strong, and nicely carried an episode that was bound not to match the outstanding high point of Zoom’s big debut from last week. There were also a couple of romantic subplots thrown in for good measure, as Barry lies to Patty about being sick, to disguise his injuries from Zoom, and Cisco takes Kendra on their first date. Both of these plots were charming, but they did come with a few frustrations.

Regarding Patty, why hasn’t Barry just told her that he’s The Flash yet? She’s obviously very close to finding out, and if she finds out before Barry tells her, she’s probably just going to be angry with him. If Barry’s secret is obviously going to come out, it’s better that he picks the lesser of two evils, isn’t it? Eventually, he’s going to get caught in a lie, and it feels like the show is dragging out Patty inevitably finding out that he’s The Flash. Heck, even Linda Park knows that Barry is The Flash now, and she’s not even dating him anymore!

As for the Cisco plot, it’s kind of interesting, and one of the better teases for next year’s Legends of Tomorrow series, and The Flash’s next crossover episode with Arrow that will air after both shows take a week off next week, which is going to lay the final foundation for Legends of Tomorrow. When Cisco prepares to take Kendra on their first date, he inadvertently vibes her, and sees a vision of an intimidating bird-man that he believes is about to attack the city. This results in him leaving the date. Um, why? He doesn’t have any proof that Hawkman is a threat, since all he gets is a vague vision of him, leading to him assuming that he’s a bad guy, for flimsy reasons. Later on, he just vibes Kendra again when he tries to make bailing up to her at CC Jitters towards the end of the episode, sees that she is also a bird-person, the future Hawkgirl of Legends of Tomorrow, and is somehow ok with it. It just didn’t feel like Cisco’s actions were very consistent with Kendra this week, and it immediately makes their budding relationship feel doomed from the start, especially when Hawkman is going to appear in the crossover event, which the previews already revealed. 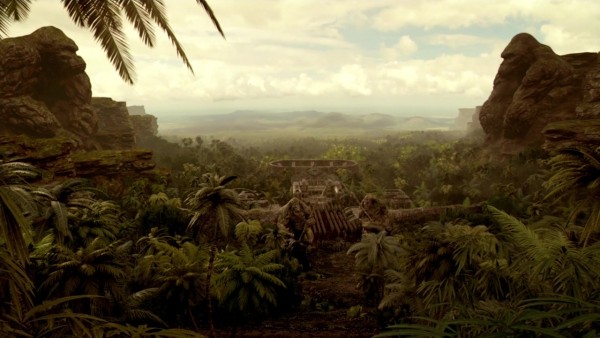 Still, “Gorilla Warfare” was an enjoyable episode of The Flash, delivering a clever and entertaining return for Grodd, and some poignant emotional dialogue between the leads, as they continue to deal with the fallout of Zoom’s overwhelming menace. The romantic subplots didn’t quite work as well, but they weren’t given that much focus anyway, even as the Legends of Tomorrow teases continue with the Cisco/Kendra relationship that will probably be over as soon as the crossover episode to come in a couple of weeks.

The Flash 2.7: "Gorilla Warfare" Review
The Flash effectively explored the emotional fallout of Zoom's debut this week, while also offering a clever and entertaining return for Grodd, even if the romantic subplots that were thrown in felt a bit half-baked.
THE GOOD STUFF
THE NOT-SO-GOOD STUFF
2015-11-18
85%Overall Score
Reader Rating: (0 Votes)
0%