iZombie shifted a little more focus to the case-of-the-week in “Abra Cadaver” this week, which resulted in a greater sense of mystery, though this is the rare instance where it came at the expense of some of the character growth. Fortunately, the fun of the mystery, and of Liv’s latest brain, still made this episode pretty enjoyable overall though.

The episode begins with a hotel maid discovering a dead magician in a room, with a metal-serrated playing card, a Queen of Diamonds, having been lodged in his throat. After Ravi detects a rank smell upon entering the scene, one that isn’t coming from the body, he soon after discovers a dead fish that appears to have been ripped apart. With no one but the maid entering the room within the timeframe that the victim was killed, and a whole convention full of magicians being held at the hotel that weekend, the stage is set for a largely enjoyable mystery.

Of course, we also have a new brain to look forward to, as I mentioned, and this week, Liv consumes a brain that gives her a flair for the dramatic, and an obsession with death, adopting the personality of the victim’s gothic illusionist stage persona. This results in jokes that thankfully write themselves, leading to humour that is understated, but very clever, and that tends to be when iZombie is at its funniest.

This week’s episode also delivered an amusing subplot for Liv beyond the case-of-the-week to boot, after Blaine comes into the coroner’s office to ask for Liv’s help, pointing out that a zombie killer is roaming Seattle. Liv reluctantly agrees to go along with Blaine, which leads to a pretty amusing stakeout sequence, before the two sneak into Babineaux’s FBI sweetheart’s house to rifle through the evidence on the missing persons case. They don’t find anything conclusive at first, though happen to be present when the results of the brain test are dropped through the door, which Blaine arrogantly cuts open to indelicately study. Liv decides to doctor the results, to keep nosy law enforcers (read: Babineaux) from getting closer to the zombie incidents, with both the agent and Babineaux now believing that the brain is a cow’s brain.

To an extent, this was a bit annoying, since it means that Babineaux has yet again been yanked away from getting to the bottom of the zombie incidents. One has to wonder if Babineaux will ever learn that zombies are roaming Seattle, and that he’s constantly working with one. Yet again, he seriously doesn’t suspect that Liv is channeling murder victims, when she’s even more clearly taking on their personalities in Season Two? It’s just getting sad at this point.

Ravi had another subplot this week as well, where he finally gets fed up with his mostly unseen girlfriend, Steph, and decides to break up with her. He does so rather tactlessly, upon waking up after pounding back a bunch of drinks when Steph puts together a huge night of Brit-themed things for Guy Fawkes Day (which even Ravi points out was weeks ago), and, that’s about it. There’s not really any fallout from this, at least with the breakup proper. Ravi does try to sneak a kiss from Peyton, which could present some drama for later, but for now, the two just seem to be co-existing, with not much ground gained or lost, beyond Peyton having to watch Vertigo alone. Yep, the show is still referencing Vertigo every so often, no doubt as a sporadic reminder that, yes, iZombie is still supposed to be based on that Vertigo-published comic book miniseries that it barely has anything to do with. 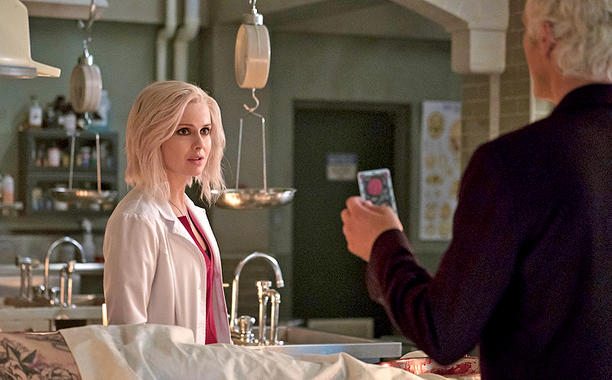 Going back to the case-of-the-week though, there are some solid twists and turns within it, particularly as Liv and Babineaux must amusingly interact with a series of eccentric illusionists to try to get to the bottom of this week’s murder. The guy’s spurned ex-fiancee seems to be the most likely suspect at first, particularly when she’s revealed to be a card-thrower, though before long, she’s outed as a red herring, since she never left her show, disguising herself as a waitress to maintain a disappearing act, one that Babineaux asked about the whereabouts of the magician as an ironic way to add insult to injury. A second red herring then came via the victim’s former mentor, who was responsible for the dead fish prank. It’s never quite explained why the fish is cut open though. Maybe he just did that to make the smell worse? Wouldn’t that reveal the prank early though?

Well, regardless, two magicians named Smoak & Meers are eventually questioned, and soon after, it’s revealed that they’re the murderers, as they killed the magician to prevent him from disclosing their big trick and ruining them, as he was inclined to do with several other magicians, including the ex-fiancee. This was almost another frustrating instance of the show pulling a killer out of its ass in the eleventh hour, though iZombie at least attempted a decent twist, where it was revealed that Meers, the effeminate-looking mute, was actually not only a woman masquerading as a man, but also the maid that entered the room and discovered the body! Turns out, Meers was operating under an alternate identity, as the hotel maid, Irina, as a way to gather intel on the victim, and discover if he was serious about exposing the trick.

Sadly, this twist worked to mixed effect. It was clever on paper, and nicely tied in with the whole magician theme of the episode, where the solution was in plain sight the whole time, yet cleverly obscured with effective audience misdirects. On the other hand though, I deduced that Meers was a woman right away, since, “He” is pretty poorly-disguised. Since the only person who entered the room in the period where the victim was killed was the maid, it was pretty easy to put together from there that the maid/Meers was the killer. Smoak meanwhile was also arrested because he hired a sultry redhead to distract the mentor and lure him away from cameras, to shake his alibi and pin the murder on him… When they seemed to set up evidence to frame the ex-fiancee instead. Yeah, I don’t get it either. Well, the day is won in any case, and the episode wraps with Major deciding that he doesn’t actually want to deal with Liv’s latest personality shift. There’s already cracks in that renewed relationship, it seems. No updates from Max Rager or Stacey Boss this week either.

“Abra Cadaver” was entertaining, and a worthy episode of iZombie, but it certainly wasn’t the season’s best offering. The case-of-the-week was an entertaining one, even if its resolution wasn’t as clever as hoped, and the episode did effectively balance the character material with the mystery-solving and humour, even if Ravi’s and Babineaux’s subplots were a bit tedious. With the midseason break approaching though, and iZombie taking next week off, hopefully we get to check in with the bigger villains like Max Rager and Stacey Boss again soon.

iZombie 2.7: "Abra Cadaver" Review
iZombie offered an enjoyable case-of-the-week this week, which merely suffered from a flawed resolution, while the subplots mixed a fun team-up between Liv and Blaine with a more tedious set of backtracking for Ravi's and Babineaux's development.
THE GOOD STUFF
THE NOT-SO-GOOD STUFF
2015-11-19
83%Overall Score
Reader Rating: (0 Votes)
0%