NOTE: Full spoilers for this episode of Heroes Reborn are present in this review

After returning to an unwelcome reminder of how Heroes Reborn started out last week (not well), the show at least managed to offer a solid Fall finale in “11:53 to Odessa”, which went back to tighter storytelling and better use of the characters… Most of the characters anyway. A handful of characters are still really poorly implemented in this miniseries, but at least Heroes Reborn didn’t close out 2015 on a bum note.

After the big shootout at the ice cream place last week, Malina is now in Noah’s company, though Luke doesn’t want to leave her side at this point. Believing that the two have a destiny together, Luke tries to come along with Noah and Malina, though Noah turns him away, saying that his involvement in whatever is going on is no longer necessary. Nonetheless, Luke follows Noah and Malina, not willing to give up his new reason for being alive, after his attempted suicide a few episodes ago. 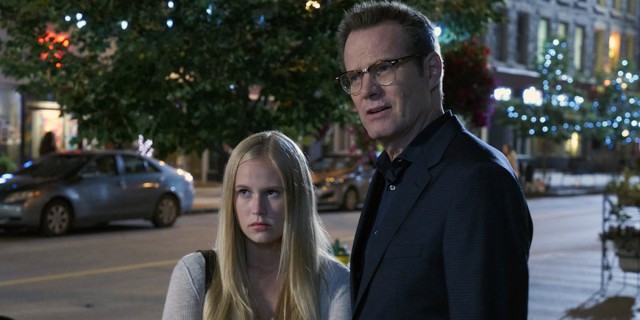 While Noah secures one of the twins, Nathan ends up in the future, with Erica, Quentin and Phoebe. This gives us our first detailed look at Erica’s operation in the future, as we get a peek at Gateway, the city that Erica had built to allow humanity to rebuild itself after the coming disaster. Miko is also there for some reason. Why? I haven’t the foggiest, but she reunites with her father, who is actually alive, and in Erica’s employ. Miko then learns the truth about being a construct modeled after her creator’s real comatose daughter, though her father directs soldiers after her soon afterward (why?), and tells her to find the Master of Time and Space, which is now Nathan. Why didn’t he just say to find Nathan then? Being needlessly cryptic is not going to help Miko, especially when she technically has the brain of a child!

In any case, Ren is also trying to find Miko. Yes, apparently Ren hasn’t been dropped from the miniseries after all. Ren is led to a hidden dojo by a Shogun that happens to be another construct of Miko’s father. He then tells Ren to find Miko again, and is given a key to Gateway in the future. I can’t imagine how Ren could possibly be of any use during the coming events, but hey, maybe his knowledge of Evernow really will come in handy somehow. It can’t be any worse than the bizarre ability to bring things in and out of cyberspace!

As much as we got some decent peeks at Gateway though, the bulk of the episode, and all of its highlight scenes, took place in Sunstone Manor. With Farrah captured, and HeroTruther about to infiltrate the manor to liberate Micah Sanders, Matt Parkman hurries to wrap up his affairs, before the disaster comes. He tries to extract information from Farrah as to Malina’s whereabouts, but comes up dry. Parkman then tries to bring Carlos in, and threatens to kill him if Farrah doesn’t tell him, because he knows that Farrah is in love with him. Yep, that old chestnut. Hey, at least Carlos graduated from being a completely pointless character to being a completely pointless character that can at least be used as a convenient plot device. Baby steps.

Naturally, Farrah spills about Malina, but Parkman isn’t able to do much about it, since Erica has apparently entered the building. In reality however, it’s the HeroTruther shapeshifter, masquerading as Erica to help Taylor infiltrate the manor. Parkman soon sees through the ruse, since the group is unaware that he’s a mind-reader, and manages to drive off Taylor and expose the shapeshifter, though the shapeshifter morphs into Parkman, in a last-ditch attempt to confuse Harris, after Harris bursts in to deal with the threat. Harris ends up shooting the shapeshifter on sheer dumb luck though, much to the anger of Parkman, who hears from Harris’ thoughts that Parkman doesn’t actually matter.

Yeah, I don’t understand why Parkman suddenly became a moustache-twirling bad guy in Heroes Reborn, for literally no reason, but if this is a contrived excuse to bring him back to the good guys’ side, that will merely pour salt in the wound of making him a contrived new villain to begin with. The show tries to justify Parkman’s actions by saying that it’s a way for him to get his wife and child (hey, they do still exist!) onto Gateway to survive the disaster, but even that feels like a stretch. Parkman’s just gone way too far off the deep end now, and the show is completely failing to justify it.

We do however get our first look at Micah Sanders after so many years, who is wired into a gizmo that exploits his ability to control machines, which somehow makes all of the prisoners of the manor compliant. Really, that wasn’t Parkman doing that? Maybe I missed something, but how exactly does an ability to control machines somehow hypnotize people on a grand scale? Maybe the miniseries will explain it later, but for now, this doesn’t really add up with Micah’s powers, as they were established on Heroes many years ago. 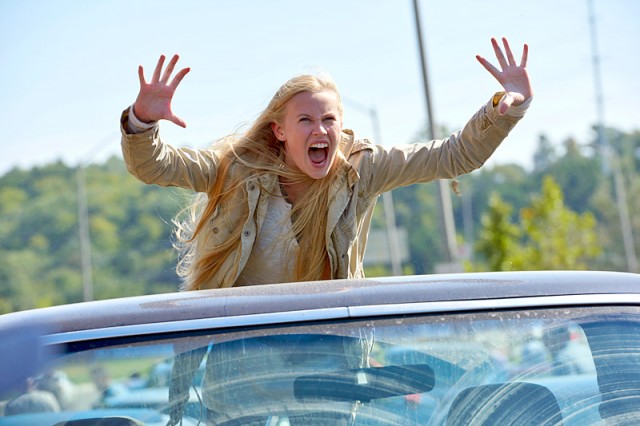 Carlos, Farrah and Taylor meanwhile are still working at finding Micah and escaping the manor, though they’re boxed in by a literal army of Harris clones. Boy, how much lopping off of fingers and toes did Harris have to do to make that many clones?! This does at least lead to a cool episode ending however, as the legion of clones pursue Carlos, Farrah and Taylor to what appears to be certain doom. It wasn’t a bad note to end the episode on at all!

The only other thing worth mentioning is that it seems like the show is starting to set up Nathan and Malina ending up on opposite sides of the conflict with Renautas. Nathan eventually agrees to help Erica bring as many people as possible to Gateway, and even rescues Noah from a last-minute death by being crushed under a flying car. How in the world did Nathan time a rescue that perfectly? Who knows. I guess this means that Noah will be waking up in Gateway when the show returns in 2016.

Oh, and that flying car came from the coming disaster, which is beginning to engulf Odessa already, right as Ren is journeying toward it, though this never becomes an issue for him. Malina manages to push back the deadly weather after intense strain, though the onlookers blame her, and believe she caused it, even as Luke attempts to defend Malina, and plead for order. Ok, seriously, why is every civilian in the Heroes universe such a damn idiot at this point?! I get fearing and distrusting Evos, but surely, these people are not blind. They did see Malina straining to contain the event, right? It was there before she got there too. Why the hell would they think she caused it?! What evidence is there to suggest that?! 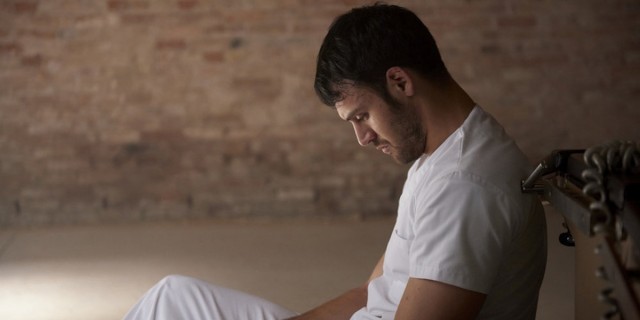 Even with the miniseries still failing to address its most fundamental flaws though, “11:53 to Odessa” still stood as one of the better episodes at this point, and a solid note to end the 2015 run of episodes on. The story is coming together once again, now that it only has three episodes left, and is finally amping up the excitement, rather than wasting so much time with pointless suspense and ill-conceived personalities. There’s still some questions that need answering, and the usual issues with the character writing don’t look like they’ll ever be fixed at this point, but as far as Fall finales for struggling shows go, the one offered by Heroes Reborn certainly could have been a lot worse!

Heroes Reborn Episode 10: "11:53 to Odessa" Review
Heroes Reborn managed to deliver a decent Fall finale, thanks to some exciting plot turns and our first proper look at Erica's operation in the future, even if the miniseries is still failing to address the fundamental flaws that continue to drag it down.
THE GOOD STUFF
THE NOT-SO-GOOD STUFF
2015-11-20
81%Overall Score
Reader Rating: (0 Votes)
0%