Telltale’s episodic Game of Thrones game has recently wrapped its six-episode first season as of this week, but Telltale’s time in the fantasy world of George R.R. Martin and HBO is not done! The masters of episodic gaming have announced today that Game of Thrones will be receiving a second ‘season’ of episodes in the near future! This makes Game of Thrones the third Telltale-made game series to receive additional selections of episodes, following the revival of Sam & Max, and Telltale’s The Walking Dead game. 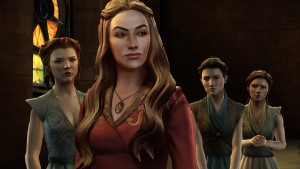 Telltale revealed that a second season for Game of Thrones was always planned, and the success of the first season has allowed them to proceed ahead with it. They didn’t speak about the announcement any further, including when we may expect the next helping of Game of Thrones episodes to arrive, though we probably won’t seem them until late 2016 or early 2017, given Telltale’s upcoming game schedule.

Telltale’s Game of Thrones takes place in the universe as the ultra-popular HBO television series of the same name, in turn inspired by novel series, A Song of Ice and Fire by George R.R. Martin. Players proceed a narrative in the background of the HBO show’s events, from the perspective of a previously unseen noble faction of Stark loyalists, House Forrester, who are threatened with eradication after the fall of House Stark, as House Bolton and House Whitehill set their sights on House Forrester’s valuable supply of Ironwood, which is used to forge most of the weapons on the continent of Westeros. Depending on the player’s actions and choices, House Forrester may stand or fall, as players must try to outwit and outlast their enemies. The personalities of House Forrester occasionally interact with recognizable characters from the HBO series as well, such as Cersei and Tyrion Lannister, Margaery Tyrell, and Jon Snow, all of whom are voiced by and modeled after their respective actors from the game’s television inspiration.

Keep rallying Eggplante for all news and updates on Game of Thrones, both the television show and the Telltale game, and stay tuned for our full review of Game of Thrones’ initial six episodes soon!