Doctor Who has had a pretty awesome ninth season in the New Who run, weaker Zygon storyline notwithstanding. The season continued to perform well with the all-important death of Clara Oswald during “Face the Raven” last week, which left The Doctor with no companions and no means of support in the season’s penultimate episode, “Heaven Sent” this week. What results from this drastic shake-up is quite likely one of the best episodes in Doctor Who history, as The Doctor must face eons of penance in the wake of Clara’s death.

There ultimately isn’t too much to say about the finer details of “Heaven Sent”, which is simple, yet flawlessly executed. Peter Capaldi has never been better as the Twelfth Doctor, even in contrast to his stellar seasonal kick-off in the two-part Dalek/Davros storyline back in September. Capaldi has lost nothing on account of Jenna Coleman’s departure from Doctor Who as well, particularly due to some choice scenes involving Coleman briefly returning to portray the ghost of Clara’s memory, as The Doctor struggles to come to terms with moving on, both literally and figuratively.

The episode begins with The Doctor being transported to a mysterious castle in an unknown location. He’s apparently alone, save for an unstoppable stalker in the form of a mysterious creature called The Veil, which he must evade as he desperately tries to figure out what’s going on. We get one of our most in-depth looks at The Doctor’s thought processes in quite a long time throughout this episode, as we see him make deductions and stay alive on the fly, now without Clara to rely on for insight. He learns that the castle is surrounded by a seemingly endless expanse of ocean to start, and after finding the skull of another mysterious inhabitant, he deduces that he is some years into the future, though also that the castle seems to be explicitly designed to frighten him.

The castle itself almost appears to be alive, as it rotates and shuffles The Doctor along something of a personal hell, complete with faded portraits of Clara, identical clothes of his waiting to be worn when he gets his former clothes wet, and the incessant stalking of The Veil, who hesitates only when The Doctor admits that he is afraid of dying. We also get a reveal that The Doctor didn’t flee Gallifrey with the TARDIS because he was bored, but instead because he was scared. This claim of boredom has been perpetuated for decades, even since the time of the Second Doctor back in Classic Who, in fact! When the Time Lord/Dalek hybrid is brought up next, it yet again begs the question of what exactly The Doctor was running from.

The real implications of the castle are far more chilling however, and revealed when The Doctor makes it to a wall of Azbantium, a crystalline substance that’s 400 times harder than diamonds. The clues lead him to more thinking out loud, complete with mental asides with The Doctor in his personal ‘mind palace’ TARDIS (a cool nod to current showrunner, Steven Moffatt’s work on fellow BBC series, Sherlock), where Clara’s ghost scribbles cryptic messages on chalkboards as The Doctor tries to figure out the situation. The Doctor also claims that he knows who the hybrid is, attempting to punch his way through the wall when The Veil comes for him, and inevitably failing. 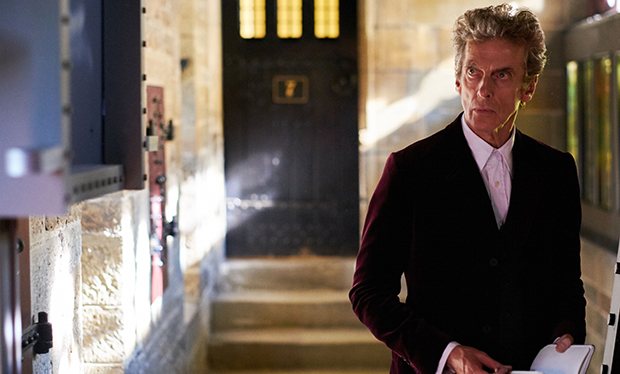 The Doctor is caught, horribly burned, left with his regeneration cycle disabled, and dropped, broken and bloody, crawling his way back up to the original teleportation chamber, where he realizes the horrible truth; That he’s caught in a time loop. The skull he found was actually his own, created when The Doctor must rebuild himself and continually make his way back through the castle for months, years, decades, centuries… Millennia… Millions of years pass as The Doctor leaves his own clues for himself to find, his own clothes to wear when he leaps into the water to escape The Veil, doomed to perpetually, unknowingly repeat the same actions, over, and over, and over, again.

This was not only a brilliant twist, but one of the most powerful episodes in the entire history of Doctor Who. This isn’t the first time that The Doctor has been put through the ringer, be it physically, emotionally, mentally or psychologically, but rarely has The Doctor been pushed to depths so mighty and impactful, and ones that perfectly illustrate the true depth of his feelings, his struggle, and his stubborn desire to succeed, no matter the cost. It’s a wonderful allegory of how The Doctor is doomed to repeat the same actions, the same mistakes, and even the same defeats over and over again, seemingly on a loop, though ever so slightly, he makes a dent in the universe. The Doctor’s greatest weapon, after all, is his will. It’s his sheer force of will that carries him on, even as he progressively deduces being further and further into the future with every cycle, piles up more and more skulls in the water below, and pushes further and further into the Azbantium, in an excellent showcase of sublime directing.

When The Doctor finally makes it through the Azbantium wall, over two billion years later, he is surprised to find himself back on… Gallifrey?! Apparently, he was placed inside his own confession dial, which manifested as the castle. The Doctor sees a young boy, and tells him to notify the Time Lords that he has returned, and taken the long way around, which was a neat callback to his words from the 50th Anniversary special. The episode then ends with The Doctor declaring aloud that the Time Lord/Dalek hybrid is him, and this is where the episode ends. Is The Doctor telling the truth? Is he merely provoking the Time Lords? I guess we’ll have to find out in the season finale next week!

“Heaven Sent” is a masterpiece, and an instant classic among Doctor Who stories. It is arguably the best story of the Twelfth Doctor to date, and one of the best in the character’s entire collection of adventures, even with Peter Capaldi spearheading a one-man show with no companions, and no supporting cast this week. If the Twelfth Doctor wasn’t your favourite Doctor before, this episode will probably change that. Amazingly, amidst so many other great episodes this season, “Heaven Sent” is no doubt the crown jewel of Series Nine, with the biggest onus upon the season finale next week simply being trying to compare to it!

Doctor Who 9.11: "Heaven Sent" Review
Doctor Who delivered one of its best episodes not just of Series Nine, but in the show's entire history with "Heaven Sent", a one-man show for Peter Capaldi that flawlessly illustrates the struggle and penance of The Doctor, as he must finally face what he started on Gallifrey.
THE GOOD STUFF
2015-11-30
98%Overall Score
Reader Rating: (3 Votes)
77%