The Walking Dead hit a pretty big slump since the approach to its seasonal midpoint a few weeks ago. The show just doesn’t seem to have a clear sense of direction lately, and that’s before the onslaught of questionable character decisions that often come with this show. Season Five’s midseason finale was an especially big let-down last year to boot, and sadly, history has repeated itself in Season Six, as “Start to Finish” is another disappointment that largely fails to get the series back on track. Now however, it’s worse, because we have to wait until February this time, not next week, to see if any of these new story threads go anywhere.

To be fair, at least The Walking Dead finally gained some sense of forward momentum in its midseason finale. It’s about time! As the tower falls on the walls of Alexandria and sends a legion of Walkers pouring in, an exciting intro leads into the Alexandrian citizens being forced to take shelter, and hole up with one another as they must ponder their next move… Then, the episode starts stumbling over itself, with some material that works, and some that really doesn’t work.

As you can expect, at least one major character is going to get killed in a Walking Dead midseason finale, and this time, it was Deanna that met her demise. After the initial escape when the Walkers first flood into Alexandria, Deanna is bitten in the chaos, which is discovered when Rick, Michonne, Gabriel and Jessie hide out in Sam’s room, within Jessie’s house, while Carl and Ron are in the garage. Much of the episode involves both Rick and Michonne making their separate peace with Deanna, which offers some of the better scenes of the episode, thankfully. Deanna reminding Michonne to go after what she wants was pretty heartwarming, and her family message to Rick was pretty good too, even if her reasoning for saving Rick just because he’s, “One of us” was a bit lame. Deanna, you were the boss of this town. Surely, you had to put more thought into saving someone than that! Yes, I suppose this is why Pete was never dealt with, but just because something is sweet in the world of The Walking Dead, doesn’t make it smart. This is also true of Deanna shambling into Judith’s room, looking like she already turned, just to get some time with the baby, which leads to Rick almost putting an axe in her skull. Come on, Deanna, you had that scare coming!

At least Deanna was making smarter decisions though, even when she uses the last of her gun’s bullets to shoot up some Walkers, and let the rest just eat her off-screen. The same can’t be said for many of the other characters, who were unrealistically idiotic, since the show had to reach for drama throughout much of this midseason finale, sadly. You wouldn’t think it would have to, considering that everyone has been driven to hiding from a horde of Walkers flooding through the town, but that’s nonetheless the case. 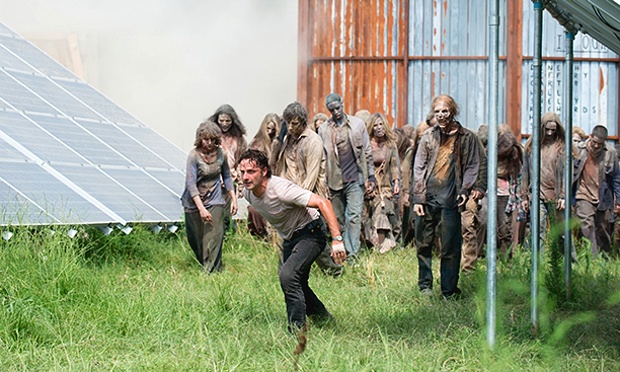 First on the idiot docket is Ron, who decides to try and kill Carl in the garage, which leads to a window breaking, which leads to noise, which leads to an easy way for Walkers to get into the house. Why did Ron suddenly decide that Carl needed to die in a fit of convenient insanity? Who knows, especially since he just snaps out of it right afterward. Regardless, it’s bullshit, and it’s clearly a contrived way to get the Walkers into Jessie’s house, so that the story doesn’t stop halfway through the episode. Come on, writers, this is really lazy!

At the very least though, you could make the argument that Ron is a teenager, and has been an idiot before. There is no excuse whatsoever however for our second big idiot in the midseason finale, Carol! What the hell was Carol’s problem in this episode?! She suddenly decides that the captured Wolf needs to die, right now, for some reason, and even attacks Morgan over it, who, naturally, refuses to kill her. This pointless conflict leads to the both of them getting knocked out like dumbasses, and the Wolf getting free. Nice going, Carol! This was even more contrived than the Ron idiocy, especially since it led to Denise being taken hostage and pulled away by the Wolf, with Tara, Eugene and Rosita showing up just in time to kick their weapons over, and let the guy walk away with Denise. What happens next? I guess we’ll have to wait until February. Hopefully Carol uses the midseason break to remove her head from her rear end. It’s been a while since she’s been a nuisance character, and even if she is very uncompromising and has a natural hate-boner for the Wolves, she must understand that a legion of Walkers surrounding the place is not ideal timing to turn on her allies, and will only lead to trouble. Priorities, Carol!!

Mercifully, the episode at least ended with some better scenes, as Glenn gets a fleeting glimpse of Maggie, after she barely escapes Walkers and ends up cornered on the watchtower, and Rick decides that everyone needs to be covered in Walker guts to walk through the Walkers that have now overtaken Jessie’s house. This was a very nicely tense scene, and a great callback to Season One. Sadly, it’s somewhat ruined however, by the episode’s very abrupt ending, with things cutting out right as Sam speaks up to his mother about something being wrong. Given the fact that he’s very pale and feverish, I can imagine what that something is… Probably. Yet again, we’ll have to wait until February to find out, which is a huge annoyance.

On top of having uneven storytelling, the abrupt, unsatisfying ending of this midseason finale felt like a major disappointment. It felt like it ended halfway through the story, which was possibly the point, but that didn’t end up being a good idea. Instead of getting viewers excited for the show’s return in February, the episode simply frustrates by trying to strong-arm them into coming back, by intentionally leaving the end of the story unresolved. The show’s pacing and structure in general was very weird in this midseason finale in fact, and the point that the episode ended on was just bizarre. Sam’s speaking up is supposed to be ominous, but the way it was done just had the episode feeling like its last few minutes were missing.

Hopefully, The Walking Dead gets some bolts tightened during the midseason break. Even the midseason finale couldn’t pull the series out of the rough, unfortunately.

The Walking Dead 6.8: "Start to Finish" Review
The Walking Dead found a small chunk of forward momentum in the midseason finale this week, but most of the episode still disappointed, thanks to contrived, oddly-paced storytelling, and an abrupt ending point that didn't really make sense.
THE GOOD STUFF
THE NOT-SO-GOOD STUFF
2015-11-30
67%Overall Score
Reader Rating: (0 Votes)
0%