Things came to an exciting climax in the Fall finale of Gotham this week, which leaves the show on a good note as it settles in to its long three-month hiatus. With Gordon deciding to take up arms with Penguin, and Bruce Wayne about to be sacrificed by the Order of St. Dumas, the battle for Gotham City comes to another big crescendo in “Worse than a Crime”, which isn’t a personal best for Season Two, but is still a pretty strong offering.

After Gordon assaulted Theo Galavan in the middle of the courtroom at the end of last week’s episode, Barnes has put out an APB on Gordon, much to the dismay of Leslie, who tries to convince the GCPD captain that Gordon hasn’t gone to the dark side. Nonetheless, an increasingly unsubtle Nygma tips Leslie off to Gordon’s location with Penguin. On that note, I must say that the scene of Gordon waking up to Penguin and Nygma being buddies and roommates was pretty amusing. I’d be pretty confused too, especially since Nygma’s turn to evil is only really known to Penguin at this point, despite Nygma seeming to be more outwardly twisted at the GCPD now. 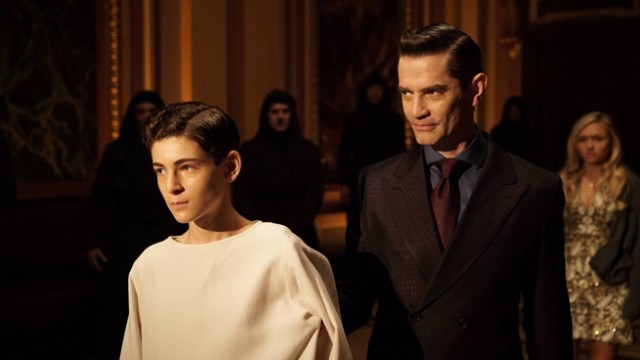 The Bruce plot meanwhile is a little shaky at times, but still mostly good. Galavan convinces Silver to yet again toy with Bruce, simply so he can watch Silver kiss Bruce before he’s killed. It’s pretty messed up reasoning, and Galavan, like Gordon, seems to be being pushed to increasing heights of desperation now, despite being on the verge of getting exactly what he wants. Nonetheless, there’s a few solid emotional scenes with Silver, who decides to give up being a liar and a manipulator, since she’s now fully aware of her uncle’s villainy. Sadly though, an attempt to smuggle Bruce out ends with the two being locked up together, where more emotional confessions are exchanged.

This is where the scenes get a little more uneven. The foundation of the Bruce/Silver interactions is not bad, but both characters feel like they undergo a bit of a heel-turn here. Bruce suddenly deciding he’s not afraid and getting off on being captured and in the face of danger, feels like it comes out of nowhere, even if the viewers know that it makes sense for his unseen future, when he becomes Batman. Likewise, Silver suddenly becoming emotional and open feels like too much, too soon. Obviously, Silver St. Cloud is not a villain in DC lore, though neither is Barbara Kean, and the show certainly went down that route at the start of the season. It might have been better if Silver’s change was more gradual, especially since she manages to make it out of the situation, yet is also separated from Bruce.

Another slight issue with the episode is that the Order of St. Dumas, despite their grand scale, still feel like throwaway villains. Their big plot to sacrifice Bruce, and somehow in doing so completely restore the Dumas family’s reputation and power, really doesn’t hold water. How is that supposed to work? Moreover, why would a man as clearly intelligent and devious as Galavan go along with something that clearly has half of the plan missing? Sacrificing Bruce Wayne in a blood ritual is not exactly subtle. Why would Galavan do something so grandiose, after working so hard to convince Gotham City that he’s a good guy? 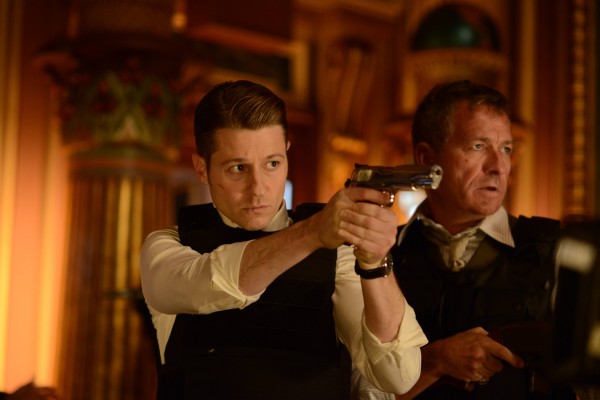 Well, it all amounts to nothing in the end, since Alfred manages to escape and be dragged back to the GCPD after trying to steal a car, despite taking a knife in the shoulder from Tabitha last week (which this episode seems to have forgotten about). This comes with the fortuitous timing of both Bullock and Lucius Fox being about to follow Nygma’s clue to Gordon (Fox also announces that he’s finished fixing the hard drive with the Wayne Enterprises evidence, though nothing comes of this yet), and the bunch reunite with Gordon, who is about to skip town with Leslie, though merely sends Leslie away when his posse comes by. The reveal that Leslie is pregnant is definitely an interesting one though. Does this mean that Leslie will bear the children of Gordon from DC lore, rather than Barbara in the case of Gotham? Gordon proposing to Leslie also seems to suggest that possibility, even if that doesn’t happen until after the episode is nearly over.

In any case, Gordon and co. make contact with Selina, who tells everyone that she has a way in to Galavan’s sealed tower. The two climb up a Ghostbusters-style, seemingly endless flight of stairs, with Bullock comically lagging behind (I guess he needs to lay off the hot dogs!), before the group arrives just in time to save Bruce from being sacrificed. This provides a pretty solid action scene, though it’s Bullock that steals the show, when the head monk leaps for Gordon with a knife outstretched, and Bullock simply shoots the guy dead in mid-air, before complaining about the stairs. Ah, Bullock… So cool, even when he’s uncool.

Things really get dramatic however when Galavan escapes with Tabitha and Silver, and it’s revealed that the group plans to jump out of a high window with parachutes. There’s only two however, with Galavan announcing that he plans to leave Silver behind. Tabitha however decides that she’s fed up with Galavan being a bastard to his niece (and only Silver, apparently), knocking him out, and taking Silver away on the parachutes. Gordon then apprehends Galavan, though Barnes comes in to arrest Gordon as well… Before Penguin knocks out Barnes and takes both Gordon and Galavan away with him.

This leads into the episode’s best scene, where Gordon decides that the law is not enough to deal with men like Galavan. Penguin beats on Galavan mercilessly with a bat for a little while, before Gordon finally tells him to stop. Rather than take Galavan in at that point however, Gordon simply pulls out his gun and shoots Galavan in the head! That’s the end of Galavan, and it’s the most cold-blooded that Gordon has ever been on Gotham so far, even considering the enforcer he killed for Penguin at the start of the season. I really hope that the show expands upon this, because this seems to be Gordon’s biggest abandonment of due process yet, and should probably come into play as Gotham City becomes more and more dependent on Batman to one day surface and protect it.

The death of Galavan would seem to terminate the seasonal arc up to this point, even though Tabitha got away, and will no doubt be back to menace Gotham City again when the show returns. Still, there are some good teases for things to come, especially when we see Galavan’s body be taken into Indian Hill, the facility that was teased when the barely-alive Bridget Pike was taken into it after the two-part Firefly story from earlier in the season. The fully-dead Galavan, complete with an umbrella stuffed down his throat (the first time that Penguin has used umbrellas in a violent manner, which is cool), is taken into a facility where several folks appear to be in suspended animation. One of them even appears to be Fish Mooney, which was an awesome Easter Egg! Regardless, two researchers talk a bit about the plans of Professor Hugo Strange, a personality that should be familiar to Batman fans, before the title logo plays again… Only to be frozen in a wave of ice! There’s one more big scene to follow, as a fleeing man finds himself cornered in a dark parking lot, before a man in heavy gear fires an ice gun at him. Looks like this is our first proper look at Mr. Freeze! Perhaps Freeze and Strange will become the big villains when the show returns in February?

“Worse than a Crime” was a fun and enjoyable Fall finale for Gotham, even if not a new high point for Season Two. Galavan’s endgame was kind of a let-down, and didn’t seem to be thought through very much, though the promise of at least Hugo Strange picking up the show as the new big bad when it comes back at the end of February is an exciting one. What’s really exciting though is seeing Gordon fully abandon the principles of his badge. Will he stay on that dark path to protect Leslie, or will he feel remorse for being judge, jury and executioner when the law previously failed him? Galavan may be dead now, but I have the unmistakable feeling that his shadow over Gordon will not disappear any time soon!

Gotham 2.11: "Worse than a Crime" Review
Gotham's Fall finale was fun and exciting, particularly as Galavan's endgame is revealed, though the ultimate motivation of Galavan was a let-down, even if it did lead to Gordon's darkest turn yet, and the promise of better villains to come later.
THE GOOD STUFF
THE NOT-SO-GOOD STUFF
2015-11-30
83%Overall Score
Reader Rating: (0 Votes)
0%