After a pretty bad stumble last week, with an episode that was previously shelved no less, Supergirl rebounded very well with “Red Faced”, a great episode that showed a whole different side of Kara, and dug deeper into the true anguish behind being an undercover alien on Earth.

The episode begins with Lucy Lane getting more involved in the group’s rituals, namely a game night that is normally shared as a way to unwind between Kara, Winn and James. Tensions really rise however when General Sam Lane, the father of Lois and Lucy Lane, comes to National City, and he’s got a request of the DEO; He wants to borrow Supergirl.

Apparently, General Lane has built a new toy, and he wants to test it on Supergirl. That toy is a revolutionary military android called Red Tornado, a mechanoid personality that should be quite familiar to DC Comics fans. Kara, unfortunately, is dealing with some anger issues though, and ends up beating on Red Tornado a little bit too much during the battle test. This leads to Red Tornado’s self-preservation protcol activating, which leads to the android flying off, while General Lane fires the android’s handler, Dr. T.O. Morrow (yep, one of the sillier names from DC lore that Supergirl had the balls to keep intact), for screwing up a billion-dollar military project.

This is another instance of Supergirl inadvertently creating her villains, which happened with the very drawing of Fort Rozz to Earth, and more recently with the botched rescue of Leslie Willis creating the threat of Livewire. This angle was particularly inspired though, as Kara has to face a rage that’s been building up in her, presumably for years, and how that goes with her having god-like powers. In fact, Hank Henshaw points out that people don’t fear Superman because of his powers, but what he may do with his powers if he ever lost his temper. It’s a good plot element that highlights Kara’s youth and inexperience as a superhero, and how it can spell trouble for the people around her.

With the DEO having to help the military round up the runaway android, Alex goes back to Maxwell Lord, to plead with him for help in identifying Red Tornado’s location. After some resistance, Lord pinpoints the android, and also finds out that it’s not self-activating, and is actually being controlled by Dr. Morrow, from an unseen location. Around the same time, Kara must fend off Red Tornado when he shows up in National City, and creates a tornado that she must stop by flying around it in reverse, in a strategy blatantly lifted from fellow DC Comics series, The Flash over on The CW. Since General Lane was in the vicinity, it’s soon after determined that Red Tornado is actually targeting Lane, via the commands of Dr. Morrow, who wants revenge after Lane canned his project. 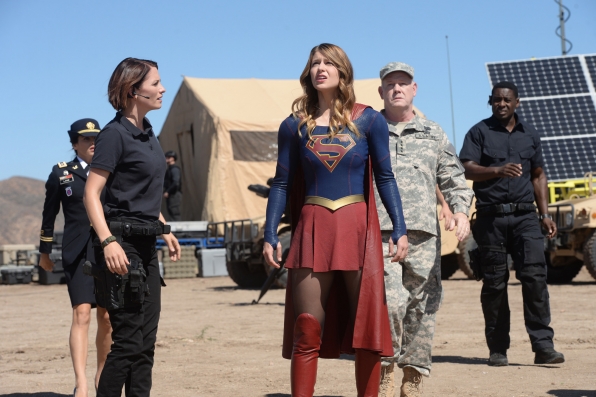 After the show finally hit upon a good villain with Livewire, putting aside that her episode aired a week earlier than it was supposed to, it was disappointing to see an interesting DC personality like Red Tornado get reduced to another throwaway villain-of-the-week. Dr. Morrow’s motivations were very bland and cliched, and what’s worse is that the potential of Red Tornado in a series like this is immediately tossed away by the end of the episode. Kara learns to channel her anger to focus her heat vision until Red Tornado explodes, and is irrevocably destroyed. At the same time, Alex accidentally kills Dr. Morrow in a scuffle, in trying to sever his mental link with the android. The show mentions that Red Tornado has even become sentient shortly before he blows up, which makes the character feel especially wasted. Red Tornado is definitely not the biggest of DC Comics personalities, but he’s certainly not a small one! Immediately offing him, and his creator, was an insult, and led to yet another wasted DC villain for the series. Hell, Red Tornado isn’t even a villain, and generally fights for the good guys in DC lore, in fact!

What really made “Red Faced” an appealing episode was moreso the interactions between Kara and various other characters. Kara’s latest interaction with Cat, who is suffering her bitchy mother being in town, was the best one yet, with the two hitting a bar so that Cat can discuss her experience with anger, and how Kara needs to find the anger within the anger. Even James actually got a halfway decent interaction with Kara this week, expressing his frustration that General Lane looks down on him and his profession, and that he needs to figure out how to express his anger as much as Kara does. These cool, uplifting moments went over better than any of the Red Tornado storyline, which just felt like it was there because the episode needed a bad guy to tie everything together. At least the action was good though. 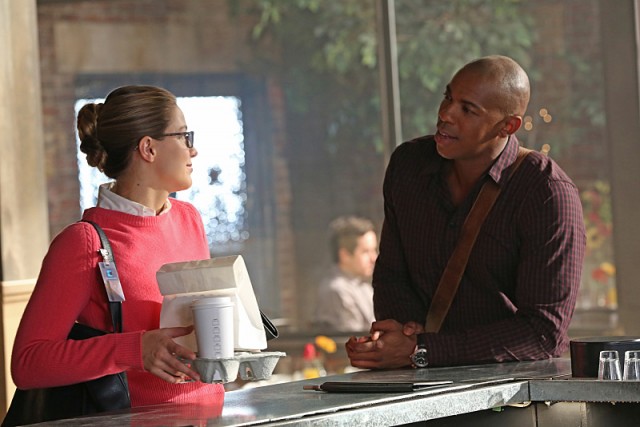 Alex, meanwhile, often got pushed into the background this week, and Maxwell Lord is still struggling to find his appeal as a character. I’m sure he’ll find it eventually, but it feels like he needs a lot more development before he becomes interesting. At least Alex became more interesting towards the end of the episode however, when Winn uncovers that Alex’s father was killed on a top secret mission to apprehend an alien in South America, with his partner in the field returning, conveniently having no memory of events, despite the heavy redactions in the file that Winn hacked. Guess who the agent was? Yep, Hank Henshaw. Could this be the dirty secret behind Henshaw obviously already being Cyborg Superman in Supergirl?

Whatever the case, “Red Faced” forcing Kara to confront a greater depth in her emotions as a hero, an alien and a woman, made for mostly good storytelling, and gave Melissa Benoist her best performance in the series to date. On the negative side though, some of the gender politics that the show tries to bring to the table with Kara and Cat in this episode are sometimes a little misguided, particularly when Kara says blatantly untrue things about men, like there are no angry female drivers, or men have no consequences for getting angry in a professional setting. That didn’t make her come off as a champion of equality and womens’ rights. It made her come off as ignorant and sexist. You could feasibly make the argument that she was just angry at men because she envied the relationship between James and Lucy, something that she does admit during the episode, but still, that doesn’t make Kara look good, even to female viewers of the show, since most of them are no doubt smart enough to know that Kara is out of line. 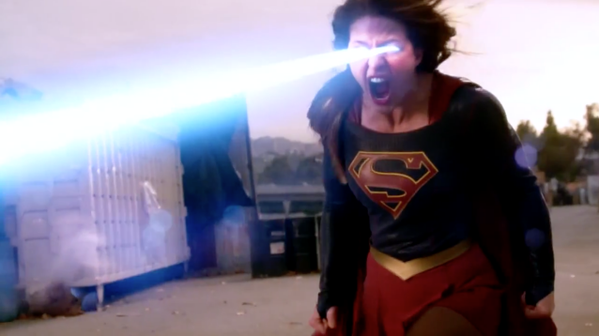 Regardless though, after last week’s really disappointing episode, it was nonetheless good to see Supergirl get back on track this week. The character-driven scenes were better than the rather faulty Red Tornado material, but the episode was still good overall, especially since there was at least some decent action from the throwaway Red Tornado plot. Things should get even more interesting next week as well, when Kara bleeds after getting cut on broken glass in front of Cat. Convenient for her secret identity, sure, but National City is no doubt not going to escape disaster next week, so it’s more than likely trouble!

Supergirl 1.6: "Red Faced" Review
Supergirl rebounded very well this week, with Kara having to face a new depth of emotion, and a powerful new foe in a rather good episode, though one occasionally dragged down by its wasted villain and some questionable opinions from Kara.
THE GOOD STUFF
THE NOT-SO-GOOD STUFF
2015-12-01
84%Overall Score
Reader Rating: (0 Votes)
0%