NOTE: Full spoilers for this episode of Agents of S.H.I.E.L.D., including a major character death, are present in this review

Agents of S.H.I.E.L.D.’s emotional escalation reached an outstanding new high this week in “Closure”, after the final stages of HYDRA’s plan for the mysterious alien planet comes together, and Ward pushes Coulson over the edge.

Things immediately hit the ground running, as Coulson and Rosalind are about to sit down for a peaceful dinner in Rosalind’s place. After some seemingly routine conversation, Rosalind is suddenly shot through the neck by a sniper, and bleeds out in Coulson’s arms. The death of Rosalind was brilliantly sudden and tragic, and Ward calling Coulson to taunt him immediately afterward, being behind the especially long sniper shot, was fantastic. Coulson fights off a HYDRA squadron and manages to be extracted by Mack, but is forced to leave Rosalind’s body in the process, leading to him coming back to the S.H.I.E.L.D. base in a desperate, broken fit of rage.

Clark Gregg really crushed it on Agents of S.H.I.E.L.D. this week, giving one of his best Coulson performances to date here. Right as we see what Rosalind truly came to mean to Coulson, she was taken away from him. Coulson’s world comes apart in the process of losing the one person he had a real connection with in quite some time, and this leads to him furiously taking out his anger on his possessions (and Hunter, for missing the shot on Ward a few episodes back), and desperately trying to question his original crew for any and all leads on how to get Ward for good, even going as far as to probe the intimate attraction that May and Daisy once harboured towards Ward, and even the less blatant attraction of Simmons!

Coulson’s fury beautifully raised the stakes of the show, as it approaches its Fall finale next week. Coulson even appoints Mack to be acting director of S.H.I.E.L.D. (he considers May, though believes that the recent events with her ex-husband leave her unfit to lead at present), since he’s about to cross lines that he knows that a S.H.I.E.L.D. director shouldn’t cross. Ward has always come to shake up Coulson’s world whenever he thinks he and S.H.I.E.L.D. can flourish again, but this seemed to be the first time that Coulson fully abandoned his principles in the name of taking Ward out. Bobbi and Hunter even come along to fake a bank robbery and kidnap Ward’s brother, Thomas, who they use to trace a call and get Ward’s location, right as HYDRA prepares to open the portal to the alien planet, using Fitz and Simmons!

Yes, HYDRA kidnaps both Fitz and Simmons, after they are placed along with Agent Banks to look into the HYDRA connection from the NASA mission that Will went on, only to have the metal-manipulating Inhuman kill Banks and the rest of the protection crew. Fitz and Simmons were similarly put to the test as Coulson to boot, resulting in Agents of S.H.I.E.L.D. getting perhaps darker than it’s ever been, as Simmons is brutally tortured by HYDRA’s Inhuman off-screen, and Fitz is forced to listen, with Ward watching him all the while.

This latest dive into Ward’s psychology also led to some great scenes between Ward and Malick, as well as great Ward insight from both Thomas and Daisy, who reiterate that Ward has a very twisted hero complex that’s all about reconciling his past. Even as he resorts to murder and torture in the name of getting under Coulson’s skin, Ward doesn’t lose his humanity, which is a very impressive balance that Agents of S.H.I.E.L.D. has achieved here, even with Ward fully embracing villainy at this point, more or less. 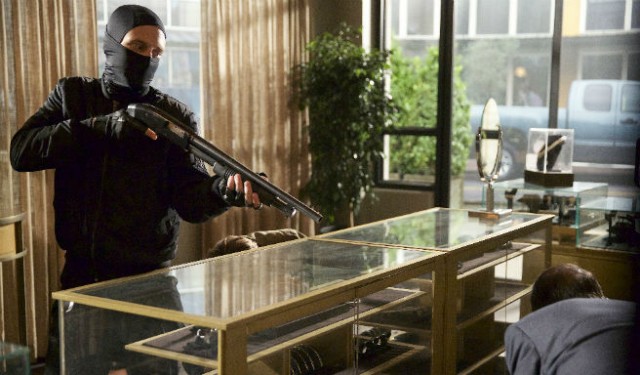 Ward even manages to successfully push Fitz into agreeing to come along on the HYDRA expedition into the alien planet, which has now been christened, “Maveth”, a planet that doesn’t seem to exist in Marvel Comics lore. This still hasn’t completely quashed my Ego, the Living Planet theory, though it’s also entirely possible that this new planet is just being made up entirely for the Marvel Cinematic Universe. I guess we’ll have to see just what this creature HYDRA wants to bring to Earth really turns out to be, during the Fall finale next week, especially as Coulson defiantly dives off of his plane, right in the middle of the open chamber to the portal, diving headlong into the portal shortly before Malick closes it! Coulson does however have a rough landing, and gets knocked out by some rocks, immediately leaving him quite vulnerable in the hostile alien territory.

The episode ends with Coulson’s plane getting targeted by HYDRA’s air defenses, as Mack looks at the battle map, and feels that there’s no way that he can go along with Coulson’s request to avoid backup, though also doesn’t see a way around the fortified HYDRA arsenal. Daisy suggests rallying Lincoln and Joey to the cause however, whom Mack motivates to avoid, “Letting the bad guys win”, even if he admits that the mission is a very risky one. Looks like this is the very start of the Marvel Cinematic Universe rendition of the Secret Warriors, which we know are coming to Agents of S.H.I.E.L.D. at some point this season, even if they’re no doubt being saved for the show’s return in 2016.

With its themes of closure and revenge, its outstanding performances from Clark Gregg especially, and its fantastic helpings of great story material and high-quality action, Agents of S.H.I.E.L.D. was firing on all cylinders this week. The tragic death of Rosalind, and HYDRA successfully reaching Maveth, have the show standing in a very strong position for its sole remaining episode in 2015. The conflict between Coulson and Ward is especially about to come to a head, and we’ll see next week if Coulson can finally take Ward out on Maveth at last, and what else Ward’s defeat may end up costing Coulson in the end.

Agents of S.H.I.E.L.D. 3.9: "Closure" Review
Agents of S.H.I.E.L.D. fired on all cylinders this week, with a standout penultimate episode for 2015, as Coulson is pushed over the edge by Ward, and HYDRA successfully reaches the hostile alien planet, in turn setting up a brilliant Fall finale next week!
THE GOOD STUFF
2015-12-02
96%Overall Score
Reader Rating: (0 Votes)
0%