You know, Clive Babineaux really needs to open up more. I say that, because at this point, iZombie is basically treating him as a plot device more so than anything else in Season Two, both a gag character who is somehow still oblivious to Liv’s zombieism, and a way to maintain a connection with the show’s case-of-the-week format. No Season Two episode of iZombie proved this more than “The Hurt Stalker”, a decent episode, though one undeniably crippled by Babineaux’s lack of personality in recent weeks.

The episode begins with an interesting hook, as our latest murder victim happens to be an ex-girlfriend of Babineaux’s. The plot thickens further when the woman is also revealed to be a stalker who has a particular thing for cops, hence her dropping a mysterious package off at Dale’s house upon the end of the previous episode, which turned out to be a scrapbook of photoshopped wedding pictures and objects. When Babineaux becomes the prime murder suspect, Liv and Ravi resolve to prove Babineaux’s innocence, even as it puts their jobs at the Seattle PD on the line.

This initial idea is a great one, and Dale revealing some surprising facts about Babineaux, such as him loving to cook Cajun food, and him being a closet superfan of Game of Thrones, makes for some pretty funny scenes. Unfortunately though, what begins as an especially interesting case quickly becomes surprisingly routine, and features surprisingly little of Babineaux, which works to the episode’s detriment on both counts.

At the very least, we get good scenes with both Liv and Ravi, and Liv and Major, as Liv and Ravi masquerade as a couple to try and get information on the murder victim from the previous couple that she planned a wedding for, while Liv’s brain-induced stalker paranoia begins to strain her relationship with Major. It’s not often that iZombie plays its brain material for drama, rather than comedy, but this episode proved to be an exception. The scenes of Liv distrusting Major and poking around on his phone were great, and this did give an excuse for Liv to start realizing that her roommate is rotten, and is the woman throwing herself at Major on the side, though some of the drama still fell a bit flat. It felt like the episode didn’t fully commit to the idea of Liv’s latest brain pushing Major to any challenging emotional territory, since there weren’t really any real consequences for Liv’s behaviour, beyond some slight displeasure from Major. 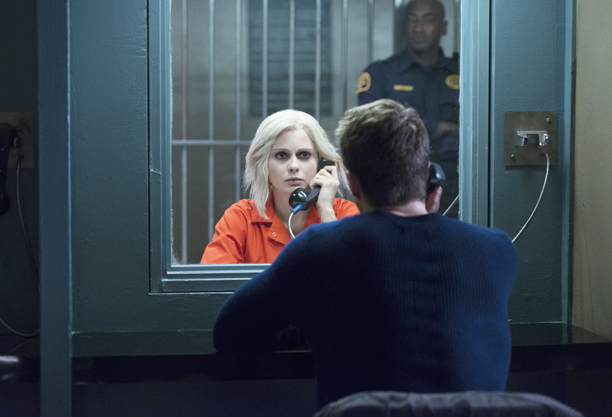 At least the case-of-the-week was solid though, and featured a good amount of twists and turns. There were some good red herrings, particularly when it looked like the very chief of the Seattle PD might be the true killer, but in the end, the resolution was satisfying, especially when we actually see one of the men involved in the killing right away. Turns out, the guy is the brother of the married woman that Liv and Ravi originally questioned, who shot and killed the stalker because she believed that her brother was about to be killed in a struggle. It’s always satisfying when the show effectively displays a killer who never meant to kill anyone, much like in “Grumpy Old Liv” at the start of the season, and that makes for effectively bittersweet victories, not simply a consistently black-and-white idea of Liv catching shallow bad guys, which would make iZombie far less interesting after a while.

Outside of the case-of-the-week material, we also finally got to check in with Max Rager, who are well underway in developing the Super Max energy drink, which is currently in the testing phase on fully-converted zombies. After Vaughn sees the drink successfully soup up a zombie’s strength, speed and stamina, he takes it himself during a training session with Major, and this leads to Vaughn also getting incredible strength, much to Major’s shock. We also however get an idea of what the, “Violent side effects” of the drink are, as Vaughn tosses a medicine ball at an annoying weightlifter, and screams in a fit of rage. Yeah, clearly, that product still has some bugs to work out, though I have a feeling that Max Rager is going to find a way to push it anyway.

Even with this being the penultimate episode of iZombie for 2015, there wasn’t much to, “The Hurt Stalker.” It was decent, but mostly unremarkable. It was also a huge missed opportunity to more effectively explore the personal life and habits of Babineaux. Even Liv and Major’s latest batch of relationship drama doesn’t feel like it’s going anywhere new yet. Hopefully, we get a change to that in the Fall finale next week though, especially when Liv sees Gilda/Rita for who she really is.

iZombie 2.8: "The Hurt Stalker" Review
iZombie featured a solid case-of-the-week with a very interesting idea this week, though the episode missed easy opportunities to make more of an impression, especially when it completely wasted the chance to give Babineaux some much-needed personal development.
THE GOOD STUFF
THE NOT-SO-GOOD STUFF
2015-12-03
75%Overall Score
Reader Rating: (0 Votes)
0%