After The Flash offered a good, but not amazing first half to the second major crossover event between The CW’s two DC Comics shows yesterday, Arrow rounded the event off with a superior second half today, with “Legends of Yesterday” completing the obligatory setup for Legends of Tomorrow, while also continuing the entertaining, action-packed fun from yesterday’s crossover episode of The Flash as well.

Arrow’s crossover episode begins with Team Arrow and Team Flash hiding out in a farm house just outside of Central City (complete with Thea making a wisecrack about superheroes in farm houses, which is likely a bold nod to DC competitor, Marvel’s recent blockbuster movie, Avengers: Age of Ultron), and immediately, the same lovable rapport between the two groups unfolds. Once again, the dialogue is very well-written in “Legends of Yesterday”, and it remains highly enjoyable to see the various heroes of both Arrow and The Flash interacting with one another, and working together to stop Vandal Savage once and for all. 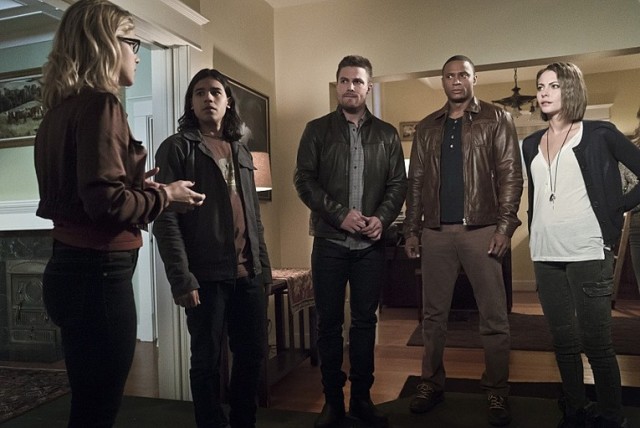 Once again, the development of Hawkman and Hawkgirl also gets a big focus, complete with Arrow’s usual flashback sequences being creatively utilized to detail Kendra’s returning memories as Shiera, when both she and Carter Hall’s former self, Prince Khufu, were undercover lovers in the Middle Kingdom of ancient Egypt. These flashbacks fill in more of the backstory behind the characters of Hawkman and Hawkgirl, as well as Vandal Savage, who seems to have a slightly altered backstory than his usual backstory from DC Comics lore in the DC Television Universe, where this time, he’s an ancient Egyptian priest, who somehow gained his immortality from a combination of magic and Nth Metal meteorites. Yes, apparently Nth Metal does actually exist in the DC Television Universe, but in this case, as some sort of magical substance that controls the lifeforce and reincarnations of Savage, Carter and Kendra, rather than the means by which Hawkman and Hawkgirl fly, like in DC Comics lore.

Regardless, the group puts together a plan to defeat Savage, when he gives Oliver and Barry a 24-hour deadline to hand over Hawkman and Hawkgirl. Hawkman’s training of Hawkgirl proves mostly unsuccessful, and Oliver is also unfocused, due to a fight with Felicity over the episode’s subplot, which I’ll get to in a moment. This leads to one of the episode’s most shocking turnouts, as Savage not only gains the upper hand, but successfully kills Oliver, Carter, Kendra, and even obliterates Central City completely, in turn killing Felicity, Thea, Diggle, Laurel, Caitlin, and Cisco, to boot! Barry manages to outrun the blast fast enough to rush back in time however, and this gives him a second chance to turn the tables in the heroes’ favour.

This was a neat way to once again bring time travel into Barry’s story, and create another interesting conflict with Oliver, as Oliver wants to exploit the, “Second chance” to defeat Savage, while Barry worries about the temporal backlash of changing the future, which is one of the better teases for events to come in the time travel-heavy Legends of Tomorrow. Nonetheless, the two better prepare their next assault, and use Nth Metal to provide a pair of gauntlets that will allow the heroes to wield the Staff of Horus. This time, Oliver also allows Thea, Laurel and Diggle to come along on the mission, which leads to a successful operation, and Barry and Oliver combining their efforts to hold the staff in place, and zap Savage until he’s dust.

Obviously though, Savage isn’t dead. After an emotional goodbye between Cisco and Kendra, which has Kendra and Carter fly off to a new location to learn how to be heroes (until they come back for Legends of Tomorrow, naturally), Merlyn scoops up the dust pile of Savage, recounting his vow to have his hatred live forever. Obviously, it couldn’t be that easy, though it begs the question of why Merlyn would ever want a force like Vandal Savage roaming the planet again. Wouldn’t an unkillable man sort of be counter-productive for the League of Assassins?

Anyway, as with The Flash’s offering yesterday, this episode also contributed a subplot to directly further the events of its main show. With Oliver currently in Central City, he takes the chance to visit his former flame, and inquire about the boy he believes to be his son. After Barry confirms that the boy is Oliver’s son with a DNA test, Oliver tries to get a chance to meet the boy, though the mother refuses. When Felicity finds out, she appears to break up with Oliver, leading to the initial destruction of Central City, and everyone in it, because Oliver didn’t have his head in the game.

With the second chance however, Oliver successfully negotiates a chance to meet his son, using his knowing of The Flash to get in the boy’s good graces. This seems to potentially set up Oliver’s son from DC lore, Connor Hawke, who we know is coming to Legends of Tomorrow, but the boy’s name is William, and the showrunners previously indicated that Oliver’s illegitimate son is not Connor Hawke in the DC Television Universe. Perhaps the boy will keep the Queen family name going, and eventually, Connor Hawke will travel back with Rip Hunter from a farther future? We’ll have to see, I suppose. In any case, Oliver meeting his son should be another great step toward further maturing his character, assuming that this isn’t the last we see of William on Arrow anyway.

“Legends of Yesterday” upped the ante nicely, and brought the second crossover event between Arrow and The Flash to a strong conclusion, while effectively laying the final pieces in place for Legends of Tomorrow. The episode didn’t quite live up to the stellar quality of “The Brave and the Bold”, Arrow’s big crossover episode from last season, but it was still a very strong one overall, with another sublime mix of fun, action, drama, and engaging storytelling. There’s still some questions that need answering when it comes to Hawkman, Hawkgirl and Vandal Savage, but I imagine that it will start to be addressed in Legends of Tomorrow eventually.

Arrow 4.8: "Legends of Yesterday" Crossover Review
Arrow concluded its second major crossover event with The Flash on a strong note, thanks to a fantastic mix of action, drama and intrigue, on top of the promising plot of Oliver meeting the son he never knew, even if some story elements are deliberately waiting to be solved in Legends of Tomorrow.
THE GOOD STUFF
THE NOT-SO-GOOD STUFF
2015-12-03
90%Overall Score
Reader Rating: (0 Votes)
0%