Among the faces of optimism in pop culture, few are comparably well-known and beloved as Peanuts’ Charlie Brown, a humble child protagonist who always picks himself up and carries on, even in the face of unyielding misfortune. Charlie Brown has been an inspiring hero to many people for decades, first originating in the Peanuts comic strip, before receiving a number of television specials, some feature films, and finally, a full 3D revival movie from Fox Animation and Blue Sky Studios for this Holiday season.

The Peanuts Movie is an incredibly faithful rendition of classic Peanuts sensibilities, and is extremely concerned with being faithful to the source material. In fact, compared to many other modern animated 3D movies, The Peanuts Movie feels downright quaint in comparison. Its cartoon hijinx are far more understated, and its storytelling comes from a far more grounded, relatable place, even for adults. It’s a very pleasant Holiday blockbuster overall, even if it doesn’t aim to elevate itself above simply telling a faithful Peanuts story for a modern audience on the big screen.

The Peanuts Movie once again stars Charlie Brown, the proper protagonist of the Peanuts franchise, despite his continually being overshadowed by his faithful dog, Snoopy when people recall the franchise, and some of its marketing. Snoopy, and his own sidekick, the little yellow bird, Woodstock, are still featured in The Peanuts Movie however, and even have an entire subplot about Snoopy trying to write his magnum opus, yet again. Appropriately, and thankfully however, The Peanuts Movie puts most of its marketing and plot focus on Charlie Brown, which is how it should be.

This isn’t the first time that Charlie Brown has used the little red-haired girl as motivation to become a so-called, “Winner”, but it makes for a good device for this latest feature film. As with many of the comic strips, The Peanuts Movie doesn’t have much in the way of an overarching narrative, and is simply about a sequence of events that incorporate its characters, who are the real stars of the show.

Most any recognizable Peanuts personality shows up in The Peanuts Movie as well, with most all of them getting at least a few good jokes over the course of the movie. Some characters definitely get more screentime than others however, and given the large ensemble cast of Peanuts, that no doubt won’t surprise people. Still, Charlie Brown brings everyone together nicely, and the Peanuts personalities are still endearing and memorable in this movie, with every viewer finding at least one to especially identify with, as with the comic strips and TV specials beforehand.

In fact, if there’s an ironic flaw to the characters, it’s that one of Peanuts’ most fondly recalled personalities, Snoopy, is the only one that sometimes falters as a character. Whenever Snoopy is played as comic relief, he’s generally done well, as is Woodstock, who both have their ‘voices’ recycled from archived recordings of Bill Melendez, helping to give The Peanuts Movie an even greater authentic feel. What works less effectively however is Snoopy’s subplot with his novel, which just feels like an excuse to incorporate the Red Baron, and make more use of the 3D presentation, even when it adds nothing to the story, beyond taking up screentime.

Still, the delightful simplicity and optimism behind Peanuts is present and accounted for with every personality, particularly Charlie Brown. The movie may hop between a handful of separate sequences over telling one singular set of events, but the little red-haired girl, and Charlie Brown’s desire to pursue her, manages to hold everything together well. Obviously, the heaps of charm doesn’t hurt either.

As Peanuts fans can probably predict, there isn’t a whole lot of story behind The Peanuts Movie. Like I said, the entire movie simply unfolds over the course of about half of a grade school year, with the little red-haired girl moving across the street from Charlie Brown, and Charlie Brown living through various events, as he tries to improve himself as a person, so that he can deserve the attention and affection of the little red-haired girl.

The movie feels incredibly faithful to the storytelling style of Peanuts, right down to how incredibly simple it is. That’s why there isn’t all that much to discuss about the storyline, because the movie doesn’t totally have one. This may lead to some children getting antsy, though well-structured slapstick and animation should help to keep childrens’ attention nonetheless, even if it’s adults that will most enjoy the incredible realization of the many personalities at play.

Steve Martino, an animation regular for 20th Century Fox and Blue Sky Studios, directs The Peanuts Movie, after the Schulz family selected him for the job, following their being pleased with his work on the film adaptation of Dr. Seuss story, Horton Hears a Who! from 2008. Martino’s love of Peanuts is very clear throughout the movie as well, since his primary focus seems to be making the movie feel authentic, even when it goes against the conventional wisdom of modern animated filmmaking. 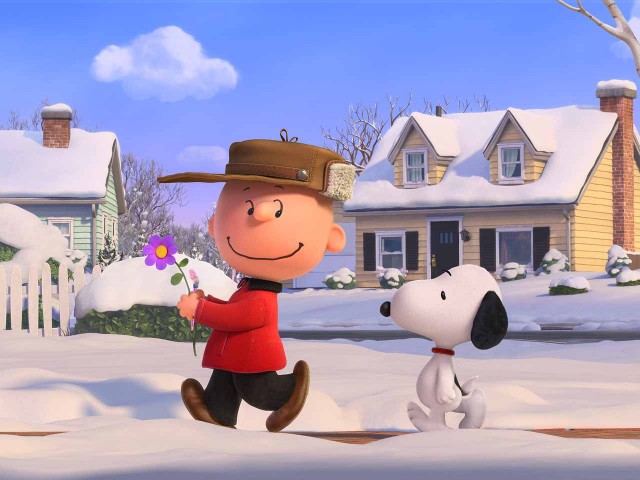 Nonetheless, fans of Peanuts are sure to heavily appreciate the authenticity, and this leads to a movie that could have easily been cynical, but is instead made with tons of heart. It’s certainly not the most complicated of productions, to the point where young children may occasionally find it to be slow and unengaging, but it’s difficult to argue that this is one of the most likable Holiday blockbusters that you can expect to enjoy this season!

Composer, Christophe Beck, as with director, Steve Martino, composes the music of The Peanuts Movie to maximize authenticity over everything else. The piano and soft jazz-heavy score feels very true to the Peanuts television specials and feature films that came beforehand, and yes, the movie does feature the iconic Peanuts theme every so often. In fact, the score feels so quaint and humble, that the more energetic and bombastic Meghan Trainor pop single that was recorded for The Peanuts Movie, “Better When I’m Dancin'”, feels incredibly out of place, and feels like the one misguided attempt to ground the soundtrack in modern animation filmmaking convention.

The rest of the audio is also quite gentle, though not to the point where the slapstick loses impact. It’s a delicate balance behind making the audio avoid feeling aggressive, while still taking advantage of the fact that this is a modern feature film, meant to be viewed on the big screen. This makes for a strong audio job overall, since it feels true to Peanuts, but not at the expense of making everything sound unnecessarily primitive.

The look of The Peanuts Movie is one of the movie’s key identifiers, and one of the things most frequently buzzed about amongst audiences. The animation sports an interesting hybrid style, blending modern three-dimensional CG animation with the more quaint 2D backdrops and style of classic Peanuts animation. It’s an interesting look that takes the classic feel of Peanuts, and beautifully brings it into the 21st Century. Whether you love Peanuts already, or are experiencing it for the first time here, you’ll likely agree that this is some of the most bold and ambitious animation work that Fox Animation and Blue Sky Studios have ever done, and it certainly feels like some of their best work to date!

As for how the 3D presentation fares, it’s pretty good, though nothing all that special or essential. It’s the somewhat superfluous Red Baron sequences that most make use of the 3D presentation, and this is indeed where the 3D cut is definitely the best one to watch, with its immersive feel and especially eye-popping imagery. Outside of the Red Baron sequences, the 3D is solid, occasionally having things like dust clouds and snow kick up at the audience to good effect, though if you’d rather skip it and stick with watching the movie flat in 2D, you’re really not missing much.

In either 3D or 2D however, The Peanuts Movie is a visual treat, packed with wonderful, authentic Peanuts-style animation. It’s certainly not nearly as visually engaging as most other modern animated movies, but that’s fine, since it means that the presentation works in service to the story, and not the other way around, making for a stronger, more heartfelt movie overall.

The Peanuts Movie, like its lowly hero, Charlie Brown, presents itself with a whole lot of lovable charm and an infectiously positive outlook, even if it also doesn’t present itself in all that spectacular a fashion. The movie is definitely a good one, and will especially delight longtime Peanuts fans, though it certainly calls back to a more old-school, budget-conscious style of cartoon animation, one that the modern excesses of Hollywood has mostly abandoned these days.

Still, The Peanuts Movie proves that Peanuts’ simplistic, old-school style still works in the modern era, when it’s done right, and the movie succeeding at being such a charming, feel-good underdog story means that it’s a great Holiday crowd-pleaser that both children and adults can find plenty to like about. The Peanuts Movie will likely be overshadowed by bigger and more ambitious Holiday blockbusters like Spectre, The Hunger Games: Mockingjay – Part 2 and Star Wars: The Force Awakens, or even emotional spectacles such as Creed and The Good Dinosaur, but as a pleasant throwback to days gone by, it’s a movie worth seeking out, even if you wait until it becomes available for home viewing.

The Peanuts Movie may not be a revolution for animated filmmaking, but it’s really not trying to be. It’s a reminder that the key ingredient of a good animated movie is its heart, which can override even the beautiful modern conventions of visual storytelling. Nothing is more important than a protagonist that’s impossible not to root for, even in a story that seems so routine and overdone on paper. Charlie Brown is as great a hero as he ever was. His struggles haven’t really elevated themselves, and The Peanuts Movie does eventually prove that his mishaps with kites and footballs certainly haven’t been resolved, but even now, he just keeps on trucking. That’s something to be respected, just as The Peanuts Movie won’t even elevate its scope when it’s given a Hollywood budget, and yet, it’s still proving that it’s a better franchise for it.

The Peanuts Movie Review
The Peanuts Movie is very faithful to the classic, quaint style of Peanuts storytelling, almost to a fault, but with its continued sense of can-do optimism and outstanding charm, it continues to prove that less is more for this franchise.
CHARACTERS85%
PLOT75%
DIRECTION85%
MUSIC & SOUNDTRACK75%
VISUAL EFFECTS85%
THE GOOD STUFF
THE NOT-SO-GOOD STUFF
2015-12-03
81%Overall Score
Reader Rating: (0 Votes)
0%