The Flash kicked off its second major crossover event with Arrow this week, in turn laying the final groundwork for the debut of Legends of Tomorrow in January. “Legends of Today” introduced core Legends of Tomorrow villain, Vandal Savage, as well as the duo of Hawkman and Hawkgirl, with Cisco’s new sweetheart, Kendra Saunders finally realizing her destiny as the reincarnation of Egyptian priestess, Shiera.

How does the episode stack up though? For the most part, The Flash’s offering of the two crossover episodes was a good one, even if it sometimes felt a little over-stuffed with setup for events to come tomorrow on Arrow’s crossover episode, as well as the Legends of Tomorrow series as a whole. A decent B-plot with Caitlin and Wells also made sure to keep the main events of The Flash in check though, as the two must try to devise a new way for Barry to increase his speed further, so he can stand a chance against Zoom. 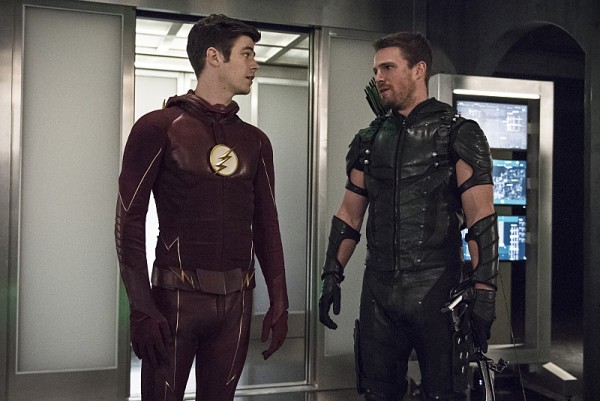 The episode begins with Vandal Savage stowing away on a ship into Central City, and taking out the crew, the police chief and the boat’s captain in one fell swoop, using a combination of mystic tricks and throwing knives. Savage manages to track Kendra down to CC Jitters, where she’s about to enjoy a romantic dinner date with Cisco, and Cisco is nearly offed by a knife himself, before The Flash comes in to save him, and briefly force Savage to retreat and plan his next move. A slip of the tongue from Cisco then outs Barry’s secret identity as The Flash to Kendra. Well, at least that will be moot soon.

Barry immediately determines that Team Flash is outmatched against this new foe, and decides to go to Star City to ask Team Arrow for help, bringing Cisco and Kendra along too. This serves as the basis of the crossover, and it mostly works, though it’s not until about midway through the episode that Oliver Queen and co. feel like they have all that much bearing on events. Oliver does manage to drive off Vandal Savage again, with some help from Thea and Barry, but the whole situation of Oliver’s group and Cisco needing their help wouldn’t have occurred, had Team Flash not been in Star City. Laurel is also strangely missing for some reason, with the quick mention that she’s off visiting her mother in Central City. I guess we’ll see her tomorrow, in Arrow’s crossover episode.

Even if Team Arrow doesn’t feel quite necessary to start though, it’s still fun to see how Team Flash and Team Arrow interact with each other, now that Barry’s crew is more experienced and wise, and Oliver’s crew has started to partake in a larger DC Universe, rife with magic and mysticism, via the new threat of Damien Darhk. Barry even rescues Oliver from being killed by Darhk’s magic, after a pretty fun action scene where Darhk steals a bioweapon of some kind from A.R.G.U.S., and the reactions of Diggle and Thea to Barry’s save, with Diggle still vomiting every time he’s carried somewhere by Barry, and Thea asking how the team knows The Flash, are pretty funny. Barry and Oliver still butt heads throughout the episode, but more often than not, they’re a great team, and you can tell that the actors from both of The CW’s current DC Comics shows are having a blast playing off of their counterparts, which gives the whole episode a very infectious sense of energy and fun.

The central conflict of trying to piece together the mystery of Savage and Kendra is not bad, especially as Kendra must quickly try to come to grips with her entire world changing in an instant, though the plot doesn’t truly get going until Hawkman enters the fray, suddenly seizing Kendra into the skies after a tender moment with Cisco. Hawkman is captured by the combined efforts of Barry and Oliver soon afterward, and then simply lays the crazy explanation on the group that, just like in DC Comics lore, he, as former Egyptian prince, Khufu, and Kendra, as former Egyptian priestess, Shiera, are eternally bound together as soulmates, reincarnated endlessly over the course of thousands of years, and always finding each other. The group’s reactions to these truths are both dramatic and amusing in equal parts, especially when Kendra must, “Emerge”, as in, activate her wings and flight powers (which apparently don’t utilize DC’s gravity-defying Nth Metal in the DC Television Universe), by jumping off of a building. The first time, Barry has to save Kendra from pancaking on the ground below to boot, as she’s predictably held back by self-doubt.

As much as the episode does a decent job of portraying Kendra as a character that must quickly adapt to a world far more large and insane than she ever imagined, the idea of powers being contingent on self-confidence is a little bit tired and overdone in modern superhero media. Kendra having to re-evaluate her relationship with Cisco, and her stance on wanting a normal life, made for some good moments, though it takes Kendra until the end of the episode to get her wings, which just barely bails out Barry and Oliver from certain doom at the hands of Vandal Savage in Central City, since Savage becomes distracted by the return of Hawkgirl, a name from DC lore that Cisco christens Kendra with. 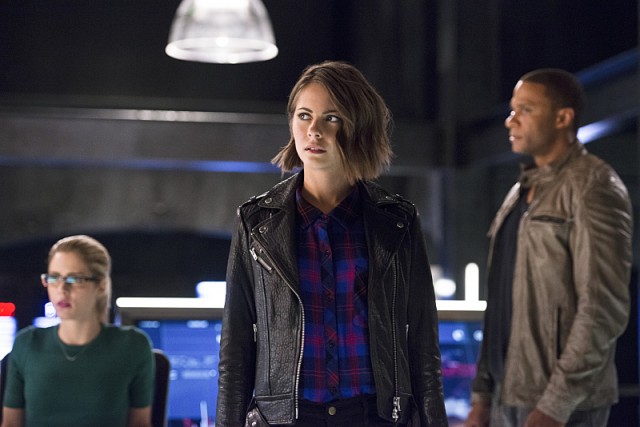 There’s a lot of mysteries that this episode didn’t bother to address, since it’s no doubt saving a good chunk of them for Legends of Tomorrow after it starts airing next month, but the fun dialogue and entertaining action throughout the episode helped to compensate. The strange abuse of slow-motion is a little odd and distracting, especially when it’s pulled out in several different scenes, but the action is still fun to watch, and the show easily establishes just why Vandal Savage is such a big threat to the DC Television Universe, especially when Merlyn comes onto the scene to conveniently know Savage’s backstory, including that he’s an immortal that has subtly influenced human history for thousands of years. Merlyn didn’t interact with Team Flash during the previous duo of crossover episodes, and this made for some more amusing scenes, particularly when Barry hilariously comments on Merlyn’s dramatic entrances.

While all of that excitement with Vandal Savage is going on in the crossover’s main plot, the B-plot has Caitlin and Wells trying to build a serum that will artificially increase Barry’s speed. Jay Garrick briefly returns however, to warn them not to use it, as the Speed Force is not so easily controlled, and Barry could end up getting badly hurt. As Wells makes an errand run to stubbornly pursue the serum anyway, Patty follows him into S.T.A.R. Labs, and shoots him after mistaking the serum gun for an actual gun.

This leads to a dramatic scene of Jay having to use the serum to pull the bullet out of Wells without killing him, as Patty and Detective West watch with Caitlin. The result is a good scene of Jay doing what he has to do and being the hero, even if it means saving the life of a man that he hates, and the genuine gratitude of Wells was pretty rewarding afterward, even if Wells shares the same animosity towards Jay. Nothing comes of the warning that Barry could get hurt from the serum yet, naturally, though the camera panning to its continued existence seems to indicate that Wells will ultimately ignore Jay’s advice, and shoot Barry up with the drug anyway, the next time Zoom shows up. 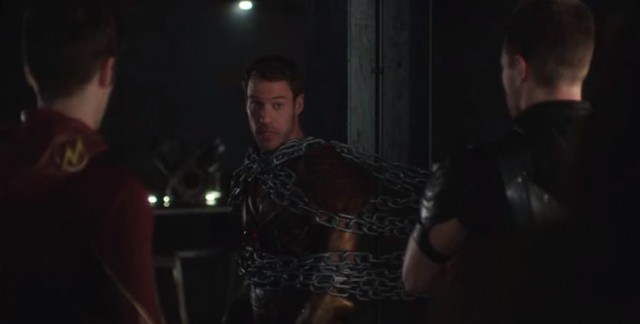 As much as the fundamental fun of a crossover episode between The Flash and Arrow is very strong here, “Legends of Today” was ultimately merely a good episode, not a spectacular one. The episode crammed in a lot of setup for both The Flash’s events to come, and Legends of Tomorrow as a whole, and this sometimes resulted in an overabundance of convoluted exposition that didn’t see any resolution. The enjoyable interactions between Team Flash and Team Arrow are still a lot of fun though, and the solid action was definitely entertaining to watch, even if we’re no doubt barely scratching the surface of Vandal Savage or the Hawkman/Hawkgirl duo at this point.

The Flash 2.8: "Legends of Today" Crossover Review
The Flash's latest crossover episode with Arrow has lots of fun inter-team interactions, and some enjoyable action scenes, though it's dragged down a bit by its over-abundance of setup for things to come, with none of it yet seeing any kind of resolution.
THE GOOD STUFF
THE NOT-SO-GOOD STUFF
2015-12-02
80%Overall Score
Reader Rating: (0 Votes)
0%