The Flash capped off 2015 with a Christmas-themed midseason finale this week, though all is certainly not merry in Central City! Both of the affiliates from Barry’s two identities weren’t given much time to celebrate the Holiday season, as Iris decides she can’t keep the secret of Detective West’s long-lost son from him anymore, and a trio of villains prepares to wreak havoc, after Weather Wizard breaks out both Trickster and Captain Cold from Iron Heights Prison!

Don’t get too excited about Captain Cold though. While it’s true that Weather Wizard is indebted to Cold, following the events of “Rogue Air” last season, and the episode did a good job of calling back to that owed favour, Cold ultimately didn’t have any real bearing on the story in the end. It felt like the only reason the episode bothered to spring Cold, after he was imprisoned at the end of “Family of Rogues” earlier this season, was so he could be primed and ready for Legends of Tomorrow to debut next month. He does warn Barry about the imminent attack by Weather Wizard and Trickster, but Barry already put together that the two were obviously gunning for The Flash. While it’s interesting to see more glimmers of Captain Cold becoming a reluctant hero in Legends of Tomorrow, he’s completely wasted here in the end, and that made for the main weak spot in what’s otherwise a pretty great episode!

Fortunately, Weather Wizard and Trickster picked up the slack nicely. Weather Wizard was a bit of a bland baddie in Season One, despite being a high-profile enemy of The Flash in DC lore, but fortunately, Liam McIntyre is finally put to better use here. He plays well off of both Mark Hamill and Wentworth Miller (all the more reason why it’s too bad that we see so little of Miller), though it’s hardly shocking that Hamill dominated the villains’ end of the episode. The Trickster was arguably one of the best Flash villain portrayals of Season One, and Hamill is still as great as ever here, being both hilarious and terrifying in equal measure. This episode did a brilliant job of balancing humour with a sense of intensity and pandemonium, and it made for a very high-quality villain team-up to close out the show’s 2015 run with!

Weather Wizard is also apparently responsible for the death of Patty Spivot’s father, which leads to a far darker Patty than we’ve seen yet. The reveal that Patty wanted to join the CCPD and the Metahuman Task Force because of what happened to her father, and how she wanted to exact revenge on Mark Mardon for it, was pretty cool, especially when Barry must later talk Patty down from murdering Mardon in cold blood, after he inevitably stops the villains. Patty even brings a convenient Flash-stopping trap gun that the CCPD has lying around for some reason, to prevent Barry from directly intervening. Is this a subtle hint that the CCPD has taken some measures to try and stop Zoom, in the wake of “Enter Zoom” a few weeks ago? That was another neat callback to a former episode, one that benefited the events of this episode in turn. 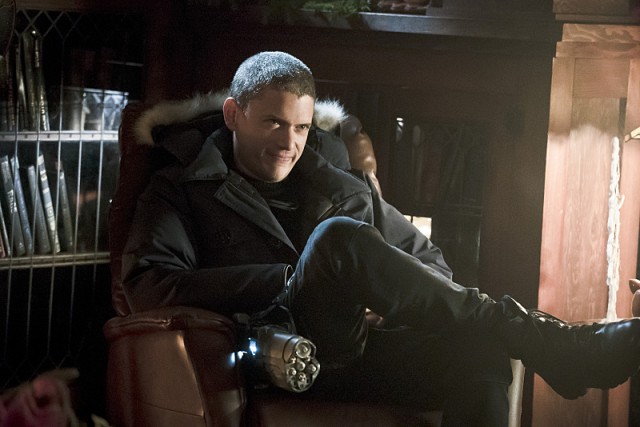 The fun of the villains’ plot, which also kept Cisco, Caitlin and Wells nicely busy, was complemented very well by a highly dramatic West family plot, when Iris decides that she needs to tell Detective West about Wally, the son he never knew. The scene of Barry and Iris telling West about this was very emotional, as were the subsequent scenes of West trying to process the information, and facing the guilt of pushing his ex-wife away, in turn failing his son, who he says is the real victim. It’s always great when The Flash still manages to come from a real, grounded place, even with such a fantastical series of events happening around it. This is a show with tons of heart, and both the drama and the action nicely brought the leads together at the end of it all… Complete with Wally showing up at the West family’s door at the end of the episode! This is all we see of Wally for now, though it made for a strong way to lead into the show’s return in 2016, so fans can discuss how Wally’s arrival will influence the show’s dynamic.

We also got something of a twist about Zoom, though some fans may be frustrated with it, as it re-treads of a few elements from the Reverse Flash conflict of Season One. Wells deduces that Zoom is sending villains to Earth-One not to kill Barry, but to make him stronger and faster. This also explains why Zoom didn’t kill Barry during the events of “Enter Zoom” a few weeks ago. Apparently, if Barry is faster, Zoom has more speed to gorge himself on. As Zoom holds Well’s daughter hostage, Wells capitulates to helping Zoom steal Barry’s speed… Though hopefully, he immediately comes clean about this, and doesn’t actually go along with that plan. Otherwise, he’s no different than the Reverse Flash from last season, even if he’s not a speedster himself this time. Hopefully, the show doesn’t re-tread that conflict too much, or else, why bother bringing Wells back in a different form?

Regardless, “Running to Stand Still” was a great, well-executed episode that expertly balanced fun and drama. The waste of Captain Cold is disappointing, and hopefully Zoom is not just going to end up being the same villain as Reverse Flash from last season, but everything else was sublime, making for lots of high-quality, Holiday-themed entertainment for fans. This season alone has had better episodes, let alone last season, but this was a solid note for The Flash to close out 2015 on, with the West family expanding, and fan-favourite villains proving that they’ve still got it!

The Flash 2.9: "Running to Stand Still" Review
The Flash capped off 2015 on a strong note this week, even if not a highlight note, delivering an episode that effectively balanced Christmas-themed fun and drama, thanks to an enjoyable villain team-up, and Detective West finally learning about his lost son.
THE GOOD STUFF
THE NOT-SO-GOOD STUFF
2015-12-10
85%Overall Score
Reader Rating: (0 Votes)
0%