NOTE: Full spoilers for this episode of Agents of S.H.I.E.L.D., including a major character death, are present in this review

Agents of S.H.I.E.L.D. wrapped its current story arc, along with its 2015 run, with plenty of shocks in “Maveth”, an episode that broke in the Secret Warriors in the Marvel Cinematic Universe for the first time, and answered more questions about just what is the deal with the mysterious planet. There was a lot at play in this latest episode, which was very action-heavy, and seemed to be in a bit of a rush to resolve everything, before the show goes on a lengthy hiatus until March, to accommodate Agent Carter in January and February.

Things pick up with Fitz being pushed along by Ward’s outfit on the alien planet, which apparently has a shrine built to HYDRA, and whatever it is they’re after. There’s clearly a lot of secrets in this place, though Fitz is nonetheless keeping an eye out for Will, who is his true objective. Fitz eventually finds Will in his secret hideaway, and talks Ward down from killing him, insisting that Will is needed as a guide.

Fitz is one of the biggest heroes of the S.H.I.E.L.D. crew in many ways, and his insistence that Will must be saved continued to prove that point, even when it might have been significantly easier to just let Ward shoot him, and tell Simmons that he died at Ward’s hands. Fortunately, Fitz is better than that, and he works well with Will, as Will leads the HYDRA crew into the, “No-Fly Zone”, then kills a couple of them, before taking off with Fitz.

Meanwhile, Coulson is having tender dreams of Rosalind, but is soon woken up to find that he’s successfully landed on Maveth. Surprisingly little difficulty seems to befall Coulson after he wakes up actually, as he almost immediately comes across Ward, kills the remaining HYDRA agents, then subdues Ward, forcing Ward to bring him to the exit portal. The tense interactions between Coulson and Ward became all the more powerful here, since Ward murdered Rosalind during the events of “Closure” last week, and it’s plain to see that Coulson is probably not going to let Ward leave the planet alive.

Fitz however is in for his own shock, as Will starts recounting events about the mysterious civilization of Maveth that lies in ruins, which Fitz snaps a few photos of on his smartphone. The thing is, how does Will know so much about the planet? Well, apparently, “Will”, is not Will, and is actually the monster that HYDRA is seeking to bring to Earth, disguised as Will! After a brief scuffle, it looks like Fitz is about to be killed, though yet again, with fortuitous timing, Coulson arrives just in time to shoot the creature, and temporarily protect Fitz. 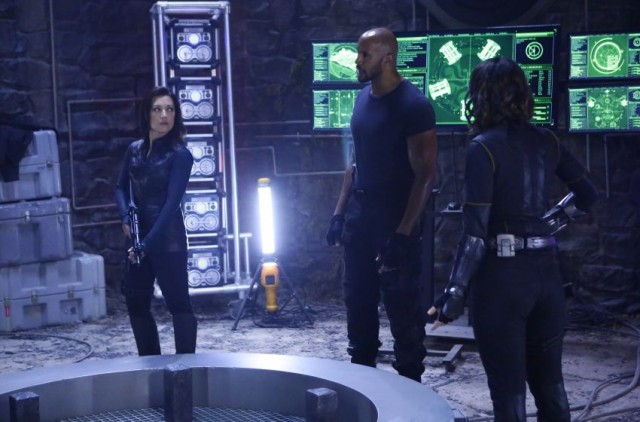 Ward seizes the opportunity to attack Coulson, but Coulson overpowers him again, as Fitz stops the alien from coming to Earth by shooting Will’s body with a flare gun, setting it on fire, and presumably killing the creature. Coulson meanwhile manages to stand over Ward, and silently, surprisingly peacefully in fact, Ward pushes his prosthetic super-hand into Ward’s chest, crushing it, and killing him! Yes, believe it or not, Coulson actually successfully killed Ward! It’s been a long time coming, and the lack of ceremony behind it was a great way to highlight how Coulson is not truly free from his grief, and Ward’s death doesn’t truly change anything for the S.H.I.E.L.D. crew.

The rest of the episode meanwhile, also had lots of thrills, as the remaining agents, including acting director, Mack, infiltrate the HYDRA compound, in an effort to rescue Simmons, and ensure that the portal stays open for Coulson and Fitz. This made for some thrilling action scenes, even if the story was a lot more rushed here, compared to the more impactful Maveth sequences. Nonetheless, seeing Joey, Lincoln and Daisy have their first mission as the Secret Warriors was great fun, and the rapport between the team made for some surprising humour, to prevent things from becoming too dark. It’s just too bad that the many events of the story felt like they couldn’t totally keep up with the fast-paced thrills.

This was also true of Simmons, who manages to quickly get free, and stumbles into the Inhuman containment area. Chancing upon Dr. Garner, she has no choice but to unleash Lash to get away from some HYDRA soldiers. Yes, Lash is back on the prowl again, making his capture during “Chaos Theory” a few weeks ago, feel a tad pointless. This felt like a pretty transparent excuse to backpedal on taking Lash out of the story, and it honestly felt like the show needed an excuse to get rid of him and nothing more, while it continued to deal with the HYDRA stuff. I guess we can see what implications this has in 2016, beyond Lash predictably murdering all of the Inhumans in containment. That’s quite the price for Simmons!

It initially looks pretty grim for our heroes, as Coulson and Fitz don’t appear to make it to the portal on time, while Mack orders May to fire on the HYDRA castle from the plane, and destroy it, with him and Daisy inside. Fortunately, the four make it out just in time, thanks to an Inhuman capture pod, leading to an emotional reunion with the entire team to wind down the episode, done mostly in silence amidst some touching music. Here, we see the tearful reaction of Simmons as Fitz tells her that Will died saving her, back when she was initially brought back to Earth by Fitz during “Purpose in the Machine”, while Coulson and Mack prepare to deliver the news to May that Ward has been killed… Well, mostly. An epilogue scene shows Ward’s body now being inhabited by the Maveth creature, which stands before Malick’s escape vehicle as the episode concludes. This was a bit predictable, seeing as we know that the creature can possess people, though it begs the question of how the monster snuck out without the other S.H.I.E.L.D. agents knowing.

“Maveth” had lots of cool action, and some pretty huge developments, though the storytelling felt like it was rushing to tie up all of the many plot elements in play during Agents of S.H.I.E.L.D.’s current season, which is especially a bummer with how amazing, “Closure” was last week. This led to an episode that felt thrilling, but also occasionally messy, as if it was trying to squeeze two or three episodes into one. All in all though, this was a solid note to cap off the 2015 run for Agents of S.H.I.E.L.D., with the newly-possessed Ward, along with Lash being loose again, and the Secret Warriors getting their first test run, all no doubt leaving Marvel fans excited, and settling in for the long wait until March, to see where all of this goes next.

Agents of S.H.I.E.L.D. 3.10: "Maveth" Review
Agents of S.H.I.E.L.D. delivered an exciting, albeit somewhat rushed midseason finale, which saw a pretty intense battle to reclaim Coulson, Fitz and Simmons from HYDRA, and Coulson actually succeeding at getting his revenge.
THE GOOD STUFF
THE NOT-SO-GOOD STUFF
2015-12-10
82%Overall Score
Reader Rating: (0 Votes)
0%