NOTE: Full spoilers for this Holiday special of “Marco Polo” are present in this review

Netflix appears to be employing an interesting strategy for a dedicated Holiday special on the streaming service. In 2014, they responded to the mixed reviews and disappointing feedback to the weak first season of BoJack Horseman by releasing a standalone BoJack Horseman Christmas episode for the end of 2014, which demonstrated a lot of key improvements to the series. Sure enough, when BoJack Horseman’s second season hit Netflix last year, it was excellent, and finally had the show achieving its proper potential.

Netflix appears to be trying something similar with Marco Polo, another Netflix show from 2014 that was met with mixed-to-negative reception in its first season (my own review gave it a middling 67% score), and as a result, has had its second season delayed by an additional half-year for re-tooling. In the meantime, Netflix is giving Marco Polo the same one-off Holiday special treatment that BoJack Horseman got before its big turnaround in quality, and thus, we have Marco Polo: One-Hundred Eyes, which, as the title suggests, is something of an origin story for the character of Hundred Eyes. 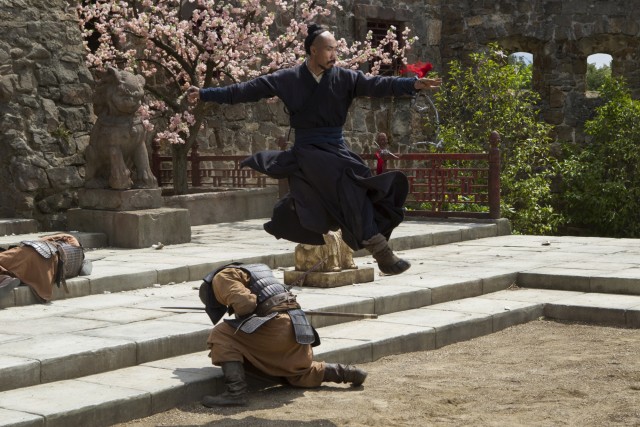 For all of the flaws in Marco Polo’s first season, one thing that it definitely got right was the character of Hundred Eyes. Easily one of the most cool, intriguing and stylish characters on the series, Hundred Eyes was the logical choice to expand upon in his own dedicated episode, even one that runs half the length of other Marco Polo episodes. Nonetheless, the special does the character proud, and presents a tight, slickly-realized origin tale for a great character, making this special far and away the best episode of Marco Polo to date!

As the special begins, we see Kublai Khan’s forces first invade Hundred Eyes’ Taoist temple, with Hundred Eyes killing twenty-five of them single-handedly before he’s captured, and even then, he breaks the legs of a couple more. Naturally, this gets the attention of Kublai Khan himself, who decides to put the monk’s capabilities to the test, having him try to get out of the grasp of a giant prisoner while blindfolded. The result is that the captured monk easily kills everyone in the room, but this happens to include the son of an esteemed lieutenant of Genghis Khan. Oh dear.

Since Hundred Eyes makes a failed escape attempt soon afterward, he’s brought back and punished for his actions, which involves him being blinded by snake venom. Apparently, the Khan had always anticipated that the monk would never stay, recounting the story of a rare and valued crane that he had to break the wing of to prevent from flying from his river. As part of his new tenure in the Khan’s court, the monk must also train the young prince in the art of Taoism, under threat of his religion’s four remaining temples being destroyed by the Khan’s army.

The rest of the special involves how the monk copes with his loss of sight, and uses it to become stronger than ever. It also gives us some insight into Prince Jingim, who is given his name by Hundred Eyes, in reference to the Chinese term for, “Pure gold.” The monk is also given his name of, “Hundred Eyes” by the Khan as well, in reference to the two playing a game of chess after the monk is blinded, with the monk thanking the Khan for his gift, saying that he is not blind, but now sees the world with, “One-hundred eyes.” It’s a very cool backstory, and one that the episode manages to fully get across, even with its tightened focus and constrained runtime. Sure, the pacing is a bit hasty at times, since the episode doesn’t have much time to work with, but it’s not often to the special’s detriment.

Of course, a big highlight of the episode is also the action choreography, which, as you’d expect in an episode that’s all about Hundred Eyes, is fantastic. The fight scenes are fast, intense, and very enjoyable to watch, especially the first battle with Hundred Eyes and the soldiers at the beginning. Likewise, the insight into Jingim’s training is pretty cool, and the direct interactions between Hundred Eyes and the Khan make for some superb character moments, avoiding shallow black-and-whites, and portraying both men as possessing clashing, but not unfair codes of honour.

Similar to the BoJack Horseman Christmas special from 2014, Marco Polo: One-Hundred Eyes also seems to effectively affirm that Marco Polo is seeing some successful improvements for Season Two, which will hit Netflix at some point this Summer. This special accomplished in a half-hour what the first season of Marco Polo struggled with over ten hours, mainly in delivering a great character-driven special that provides a superb blend of psychology, politics and action. Let’s hope that this tightened, extra appealing focus can be maintained in the show’s proper second season later this year!

Marco Polo: One-Hundred Eyes Review
Netflix's one-off Holiday special for Marco Polo, spotlighting Hundred Eyes, is a big success, presenting a sublime mix of character psychology and stylish action, while also perfectly fleshing out one of the show's coolest characters, and how they came to be.
THE GOOD STUFF
THE NOT-SO-GOOD STUFF
2016-01-13
85%Overall Score
Reader Rating: (1 Vote)
95%