Despite prior claims to the contrary, NBC executives, Bob Greenblatt and Jennifer Salke have given quite the promising update about the network’s in-development DC Universe-inspired sitcom, Powerless, which received an official pilot order just a couple of days ago. Speaking to IGN today, the two confirmed that, apparently, no DC Comics personality will be fully off-limits for their sitcom, with the executives confirming that every nameable DC personality was name-dropped over the course of the negotiations as being useable on the series in some form. 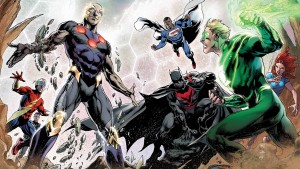 This is good news, since it means that even the biggest of DC personalities, such as Superman, Batman, Wonder Woman, The Flash, Green Lantern or Green Arrow, among others, could be incorporated into Powerless in some shape or form, according to Salke. Greenblatt followed up this statement by saying that DC heroes are like the, “Wallpaper” of the sitcom, which will still be driven by grounded, human, and yes, power-less personalities. Apparently, DC’s do-gooders can sometimes be observed doing things like blowing up a building in the background, with Salke also teasing that the show’s pilot episode features a decent-sized role for at least one recognizable DC hero, not an A-lister, but one that DC fans will easily recognize.

It’s to be expected though that, even if no DC personality is completely barred from Powerless, there will no doubt be caveats, to avoid stepping on the toes of competing networks’ DC Comics shows, as well as DC Entertainment’s upcoming slate of movies that will inhabit the big screen DC Extended Universe. For example, CBS’ Supergirl series is allowed to mention Superman, along with supporting personalities like Lois Lane and Perry White, and can even show the body of the Man of Steel during certain scenes, though the show is apparently forbidden from showing Superman’s face, or giving him any speaking lines. It’s likely that Powerless will see similar limitations with how several of its DC personalities are portrayed, given that characters like The Flash, Green Arrow, Hawkman, Hawkgirl, The Atom, Vixen, and Firestorm are all headlining shows for The CW, while FOX’s Gotham is already making use of most Batman personalities beyond the Dark Knight himself, and, again, the Superman family is a cornerstone of Supergirl on CBS. 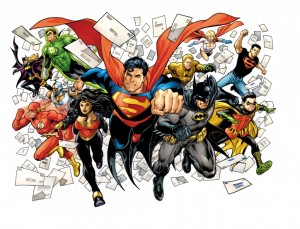 Greenblatt and Salke also responded to Marvel’s plans to get their own sitcom, Damage Control on the air via ABC next season, saying that they can’t worry about the shows being hosted by competing networks, only promising that Powerless will be great. The network is, unsurprisingly, very excited about the pitch, which will involve white-collar office workers at an insurance firm, dealing with incidents related to powered people, within a new variation of the DC Universe. Greenblatt and Salke also spoke about superheroes facing their own challenges in the world of Powerless, and how the series won’t just be about spotlighting the creme de la creme of DC heroes, but also an entire world and population of DC heroes, of varying levels of recognition and reputation.

We’ll continue to keep an eye on the development of Powerless, so keep filing Eggplante for all news and updates on DC’s television projects.