After it was fast-tracked into development, following Fox successfully inking a television deal with Marvel to produce two separate television spin-offs to 20th Century Fox’s X-Men movies, Legion seemed to be an especially big priority for premium Fox subsidiary network, FX. As suspected, the show is planning a debut later in 2016, as confirmed by FX president, John Landgraf, who spoke a bit about the series for the Television Critics Association Winter Tour today.

Surprisingly, Landgraf revised a former claim about Legion to start, by confirming that the series doesn’t take place in the same universe as the X-Men movies that 20th Century Fox has been making for over a decade and a half. He clarified that the show is seen as taking place in a parallel universe to Fox’s X-Men movies, where the government is aware of the existence of mutants, but the public is not. It’s also likely that the X-Men may not exist at all in this universe, given that their reason for being is to protect the public from mutant threats. Landgraf also claimed that Legion will take place a few years in the past at least, though didn’t specify an exact time period.

So far, Legion only has one actor in its cast, Fargo’s Rachel Keller, who will play an unspecified role in the series. Fargo showrunner, Noah Hawley will also serve as the showrunner for Legion. The show’s lead hasn’t even been cast yet however, with the lead character being a man named David Haller, who suffers from intense schizophrenic episodes, and is confined to a mental institution, though Haller will soon learn that his visions may not be figments of his imagination. In Marvel Comics lore, Haller is the illegitimate son of Charles Xavier, the man who will one day lead the X-Men. Despite that connection however, Landgraf stated that there are currently no plans to feature any character that has been seen in the X-Men movies on Legion at this point, so one probably shouldn’t hold their breath for another Patrick Stewart appearance. He did however say that things could change by the time the series hits the airwaves, should it get picked up.

Landgraf rounded things off by confirming that he’s already seen the pilot script, as well as scripts for additional episodes, and that, while he’s adamantly pushing for a pilot order over straight-to-series, he’s very optimistic that Legion will go to series, as the scripts are, “Extraordinary”, according to him. Landgraf also admitted that a writers’ room and some sets are already being assembled for Legion, further affirming that FX is very optimistic about the show already being picked up. Should Legion get the green light, its first season will be ten episodes. Landgraf also seemed unbothered by concerns about Noah Hawley being stretched between Fargo and Legion at the network, among other potential projects he could take on, as Hawley recently signed a new multi-year deal for Fargo and potential new projects, with Landgraf believing that Hawley is perfectly capable of balancing both shows at the same time, especially since Fargo won’t be back until 2017 at this point.

The good fortunes of Legion currently appear to be standing in contrast to sibling X-Men television spin-off, Hellfire, which is in development for FOX. It was also confirmed at the TCA Winter Tour today, unfortunately, that Hellfire lost its initial creative team of Evan Katz, Manny Koto and JD Payne, who vacated the in-development series to instead serve as showrunners for 24: Legacy, a new spin on FOX’s acclaimed 24 series that won’t star Kiefer Sutherland’s Jack Bauer, which was recently given a pilot order. Because of this setback, Hellfire probably won’t have a shot at making it to the airwaves until 2017, though FOX claims that they will announce a new creative team for Hellfire soon. 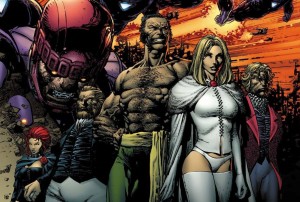 It’s also believed that, unlike Legion, apparently, Hellfire will share a universe with 20th Century Fox’s X-Men movies. The movie will be particularly linked to 2011’s X-Men: First Class, in that it will deal with some background antagonists of that movie, the Hellfire Club, a clandestine society of evil millionaires (or billionaires, in modern Marvel media), who are frequent enemies of the X-Men in Marvel Comics lore, and count several mutants among their ranks. Hellfire will specifically involve a young government agent tracking a power-hungry woman with extraordinary abilities, one who is affiliated with the underground Hellfire Club, who aspire to dominate the world at large.

Keep mutating Eggplante for all news and updates on Legion, Hellfire, and other developments for Fox’s X-Men universe, both on the big screen and small screen.