NBC’s unorthodox strategy of initially launching and promoting Superstore with a trio of early access episodes in 2015 seems to be paying off very well. With the roughest debuting episodes gotten out of the way to rope in early fans, Superstore is now left to fulfill its proper syndicated first season without having to fight through early rough edges. This continued to be evident in “Shoplifter”, another very fun and amusing episode that continues to push forward the bar of quality for this budding sitcom.

Things begin on a rather interesting note, as an old man dies on one of the display couches, which Jonah and Garrett discover. Glenn seems to be especially disturbed by the incident, and becomes obsessed with trying to reconcile it, using a series of comically spiritual rituals that aim to put him and the rest of Cloud 9 at ease. It’s a darkly funny opener that works pretty well, especially when it leads to a pretty amusing subplot between Garrett, Mateo and Cheyenne.

Apparently, Mateo and Cheyenne both want to get their hands on the display couch, which Dina stresses is not fit to be sold to customers. Since Mateo and Cheyenne start arguing about who gets the couch, Garrett decides to settle the situation by having the two sit on the couch together, and whoever sits the longest will get the couch. It’s a reasonably sound plan, and one that gets pretty funny, as Cheyenne attempts to gross out Mateo into leaving, as she recounts the birthing process that she has to look forward to.

Dina meanwhile is kept plenty busy herself, as she spies a person that she thinks is a shoplifter, going as far as to apprehend the woman, believing that the security cameras will prove her guilt. Unfortunately, the security camera in the make-up department is faulty, and there’s no proof that the woman did indeed shoplift cosmetics. Initially, Glenn appears to talk Dina out of pushing the issue, but when the woman proves to be unpleasant and insulting, Dina decides to go out of her way to incriminate her.

As usual, Dina completely steals the show in this episode, and her core plot only gets funnier when she coerces Amy into going along with her vendetta against the possible shoplifter. Attempting a good cop/bad cop routine with Amy, Amy is caught off guard when Dina leads off as the good cop, forcing Amy to be a rather un-intimidating bad cop. This is one of the funniest sequences that America Ferrera has had yet on Superstore, especially when her hatred of the woman becomes genuine, upon seeing how insulting she is towards minimum-wage workers. 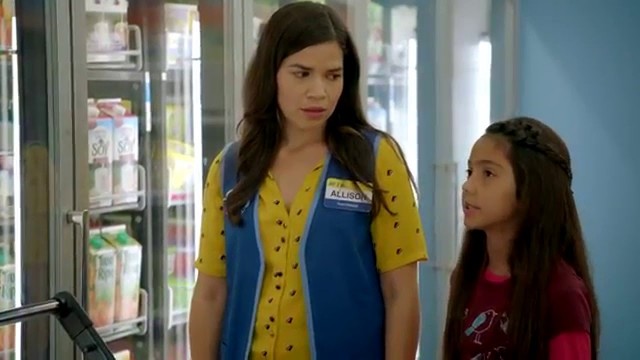 Unfortunately, the woman is innocent of shoplifting, and Dina is forced to let her go, with the woman even threatening to get Dina fired. Glenn however rectifies the situation by smuggling a copy of Barney’s Great Adventure into the woman’s purse, saving Dina’s job. It was a moment that was equally ridiculous and sweet, proving that there is professional respect between Glenn and Dina, even though they constantly seem to argue with one another.

The remaining subplot involves Jonah, who gets a chance to meet Amy’s daughter, Emma, whom Amy has to smuggle in to work, when her babysitter bails on her. Seeing Emma resemble a tiny version of her mother is pretty amusing, and Jonah also got one of his funniest episodes yet, when Emma gets her first period in the bathroom, and Amy is nowhere in sight, forcing Jonah to try and fix the situation. Jonah’s rookie ineptitude as both a man and a store employee is put to excellent use here, as he predictably weirds out customers and mostly makes the situation worse, though does ultimately manage to fix it, eventually. The reaction from Amy when Emma reveals that Jonah taught her how to use a Maxi Pad is pretty priceless though!

Things end with Glenn forcing the employees to take part in a final ritual, whereupon they burn the couch that the old man died on, since store merchandise has to be destroyed if a death occurs on it. The fact that Garrett was aware of this, and basically tricked Mateo and Cheyenne into embarrassing themselves over the couch, was pretty amusing too. The final moments of the ceremony might have stretched the episode’s credibility a bit, since it’s hard to believe that a bunch of minimum-wage workers would go along with the charade after their shifts had ended, but that’s pretty minor. 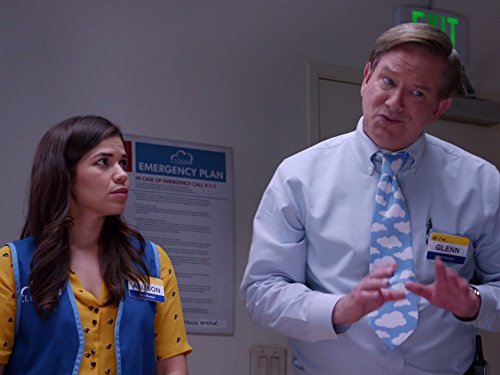 It’s still early on, but Superstore now seems to be really hitting its stride, and carving out its own niche in the all-star NBC workplace comedy lineup. It no longer feels like the show is completely in the shadow of The Office or Parks and Recreation, and it looks to be developing into something very special and very funny in its own right. Keep up the good work, Cloud 9!

Superstore 1.5: "Shoplifter" Review
Superstore continues to deliver a healthy uptick of great comedy in "Shoplifter", which marks another standout storyline for Dina, and the funniest turns yet for both Jonah and Amy in particular.
THE GOOD STUFF
THE NOT-SO-GOOD STUFF
2016-01-15
85%Overall Score
Reader Rating: (1 Vote)
84%